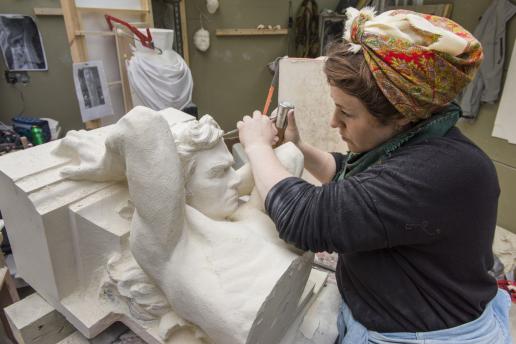 City & Guilds of London Art School invites visitors to come and see stone carving in action and have a go themselves during its open house on 11 & 12 May.

City & Guilds of London Art School is once again participating in London Craft Week (9-13 May) by holding an Historic Carving Open House, which includes a stone carving demonstration and competition, on 11 & 12 May. Visiting times are 10am-7pm on Friday 11th and 10am-5pm on Saturday 12th.

Pierre Heritage GB, the company formed last year by Berkshire-based Amarestone to sell French limestone in the UK, is sponsoring the carving competition and has supplied the French Lavoux limestone being used by the carvers. The Masons' Livery Company has donated the prize for the stone carving competition, which is being judged by renowned sculptor Dick Onians, who studied at the City & Guilds of London Art School in the 1960s.  Visitors will have a chance to try their hand at carving stone each day if they would like to.

All are welcome to visit the School in Kennington Park Road, SE11 4DJ, to get a look behind the scenes of stone carving's highly regarded and greatly respected centre of learning.

The City & Guilds of London Art School prides itself on the depth and authenticity of the carving it teaches - just as it always has in its 130 years of teaching the skills. It employs some of the country's best sculptors with a wealth of in-depth knowledge about historical styles and traditions. On the stone side these include Tim Crawley, who was in charge of the 'Modern Martryrs' stone carvings for Westminster Abbey, and Nina Bilbey, who carved the statues of The Queen and Prince Philip at Canterbury Cathedral.

Tim Crawley will run the 'have-a-go' sessions of stone carving from 1pm-2pm on each of the open house days. There will also be gilding and pigment demonstrations taking place during the open days and from 2.30pm-5pm on the Saturday a reunion of some of the School's carving alumni.

The School plays a crucial role in the retention of skills essential for preserving the world's most important monuments and buildings and offers the UK's only Diplomas and Post-Graduate Diplomas in carving. The School does not receive government funding, relying instead on the goodwill and philanthropy of supporters.

The School is so highly regarded that many burseries and scholarships are provided for students attending, including scholarships from the Queen Elizabeth Scholoarship Trust (QEST), which has helped so many students through their stone carving studies at the School.

There are also stonemasonry and stone carving workshops (as well as wood carving workshops) taking place at the The Prince’s Foundation at 19-22 Charlotte Road, London, EC2A 3SG, as part of London Craft Week, although they have all sold out.

Stonemason Lily Marsh is leading the stone courses. She is introducing a small group to the art of stoneworking by teaching them to cut themselves a mason’s mark. She is also leading a stonemasonry taster session for 16-20-year-olds.

Concerned that traditional crafts are dying out across the UK, the Prince’s Foundation hopes these workshops will encourage young people to find out more about stonemasonry.

The Prince’s Charities in Shoreditch open their building on Sunday 13 May for anyone wishing to find out more about the Prince’s Foundation for Building Community and the Prince’s School of Traditional Arts. The information desk will be open between 10.30am and 2.30pm.