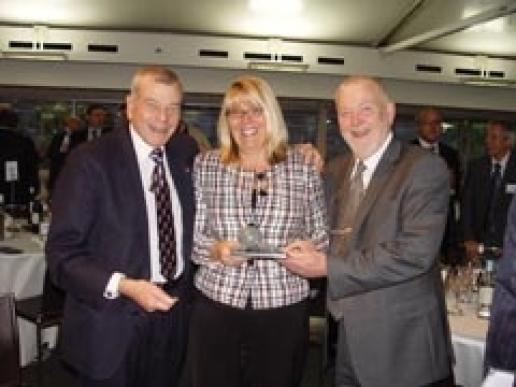 A capacity audience of 350 sat down to watch the presentation of the industry’s top accolades, the Natural Stone Awards, at Lords cricket ground in November.

Afterwards, those from the stone industry enjoyed a celebratory lunch at the home of English cricket with their customers and clients, giving the architects, clients and contractors a chance to appreciate each other’s contributions to exemplary projects.

Dickie Bird, the retired cricket umpire who is one of the best-known names of cricket, handed the trophies to the winners accompanied by Alex Stable, elected the new President of Stone Federation Great Britain at their AGM the day before.

Dickie was also the after lunch speaker, regaling his audience with anecdotes from his years both as a player and an umpire and presenting his versions of some of the incidents former players have written about in their autobiographies.

Dickie was presented with a Burlington slate carving of a cricket ball and bails by Alex Stable, whose company, London stone specialists Stone Productions, had made the ornament.

The Awards presentation ceremony was compared by sports commentator Jim Rosenthal while the winners were announced by ‘voice of the balls’ Alan Dedicoat.

The Awards are an important part of Stone Federation Great Britain’s promotion of the stone industry to a wider audience. As the judges of the competition commented: “Stone, correctly used, enhances our environment and maintains our quality of life, and Stone Federation is spreading that message.”

A new Award was introduced to the two-yearly scheme this time to promote the sustainability of using stone and enhance the message that stone is environmentally friendly. It was to be presented to any of the entries in the other categories that showed particular sympathy towards sustainability objectives.

In the event, it did not achieve the objective as there was no winner and the one project recognised in the category was the cleaning of the Wills Memorial Building in Bristol by WR Bedford (Stone Masonry), who were Highly Commended for recycling the water they used.

An Award introduced last time for Design & Technology Innovation in order to recognise the significant software developments made by Northern Irish stone specialists S McConnell & Sons in working the granite for the Princess Diana Memorial in Hyde Park, was presented again. And again it went to McConnells.

It was also another memorial that gained the Award, this time the 43m diameter Portland limestone Armed Forces Memorial at the National Memorial Arboretum at Alrewas, Staffordshire, designed by Liam O’Connor.

And before the Awards themselves were presented, there was a presentation by TV builder Tommy Walsh, a long time friend of the stone industry, of the Trainee Mason of the Year Award. It went to Stephen Spence of Oldham stonemasons Lloyd and Smith. He attends York College. Runner-up was Marc Pate from Wells Cathedral Stonemasons in Somerset, who attends Moulton College.