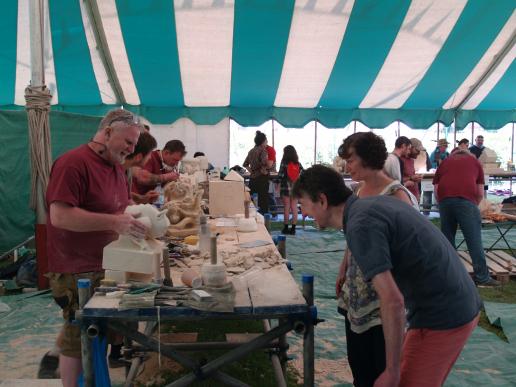 Visitors admire the work of the stone carvers at the Wells Stone Carving Festival during the May Day bank holiday.

Wells Stone Carving Festival organised by Paul Roddan of Somerset Stonemasons for the May Day bank holiday weekend got this year's stone events off to a flying start.

Dawn-to-dusk sunshine sent temperatures soaring for the Wells May Day celebrations as the masons taking part worked on their creations in a marquee outside the Bishop's Barn, a medieval tithe barn owned by the council of the UK's smallest cathedral city. 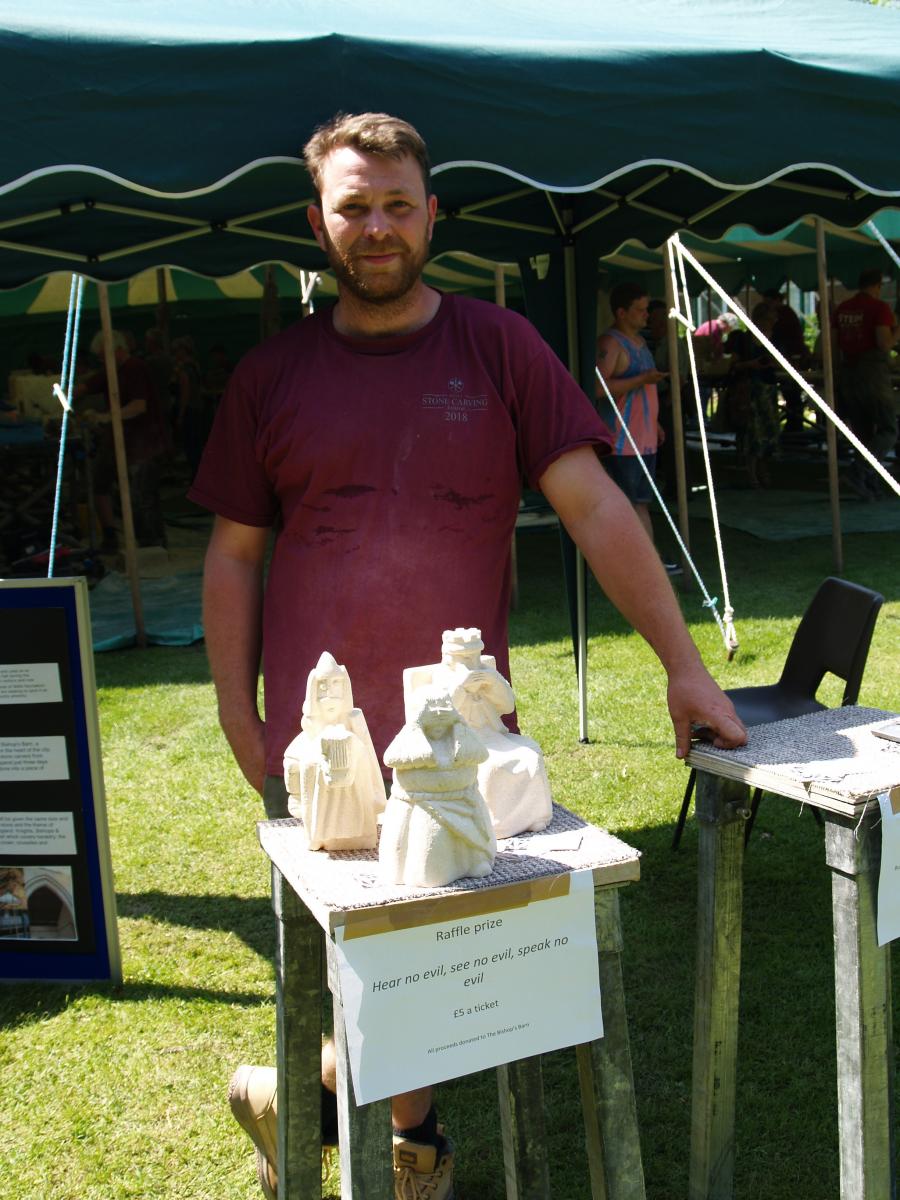 Paul, who carved a set of 'See no Evil, Hear no Evil, Speak no Evil' figures as a competition prize for visitors to the event, had done well for backing for his Festival, which he was prompted to hold when the council asked for suggestions for events to be staged there this year. It was all a bit last minute because the council only invited suggestions late last year. When the stone carving festival was selected as one of the events, Paul and his partner Rosie Park started recruiting carvers and publicising the event by putting up a website, posting information about it on social media to encourage support, and putting posters and flyers around the city. 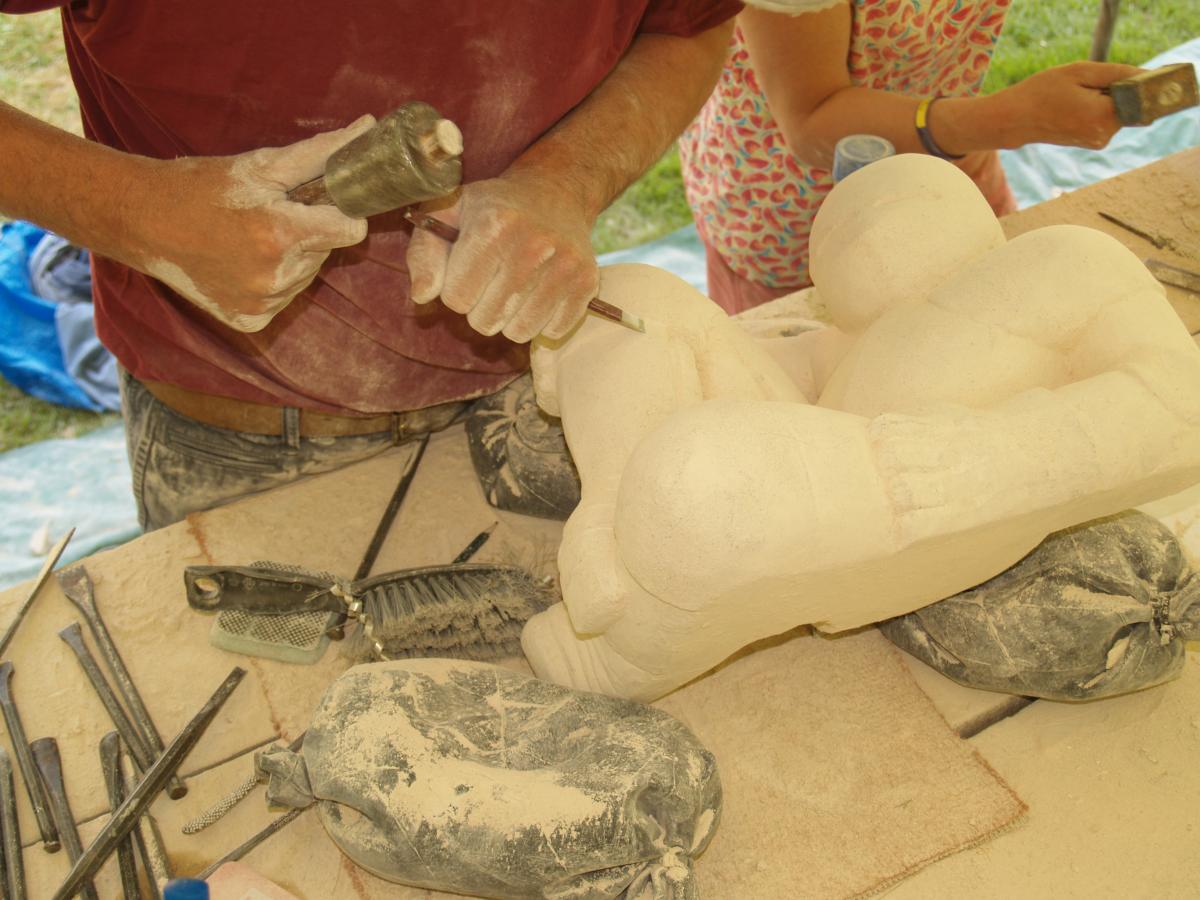 The Masons Livery Company, of which Paul is a Yeoman, made a donation towards the cost of the event and paid for a prize for the best work. In fact there were three prizes - the public's choice, the choice of the carvers taking part, and the choice of the Trustees of the Bishop's Barn. The winners all received tools from G Gibson & Co Ltd, whose owner, Craig Timmins, had a stall at the event to sell his stoneworking hand tools. All those taking part received a generous money-off voucher for G Gibson & Co tools. 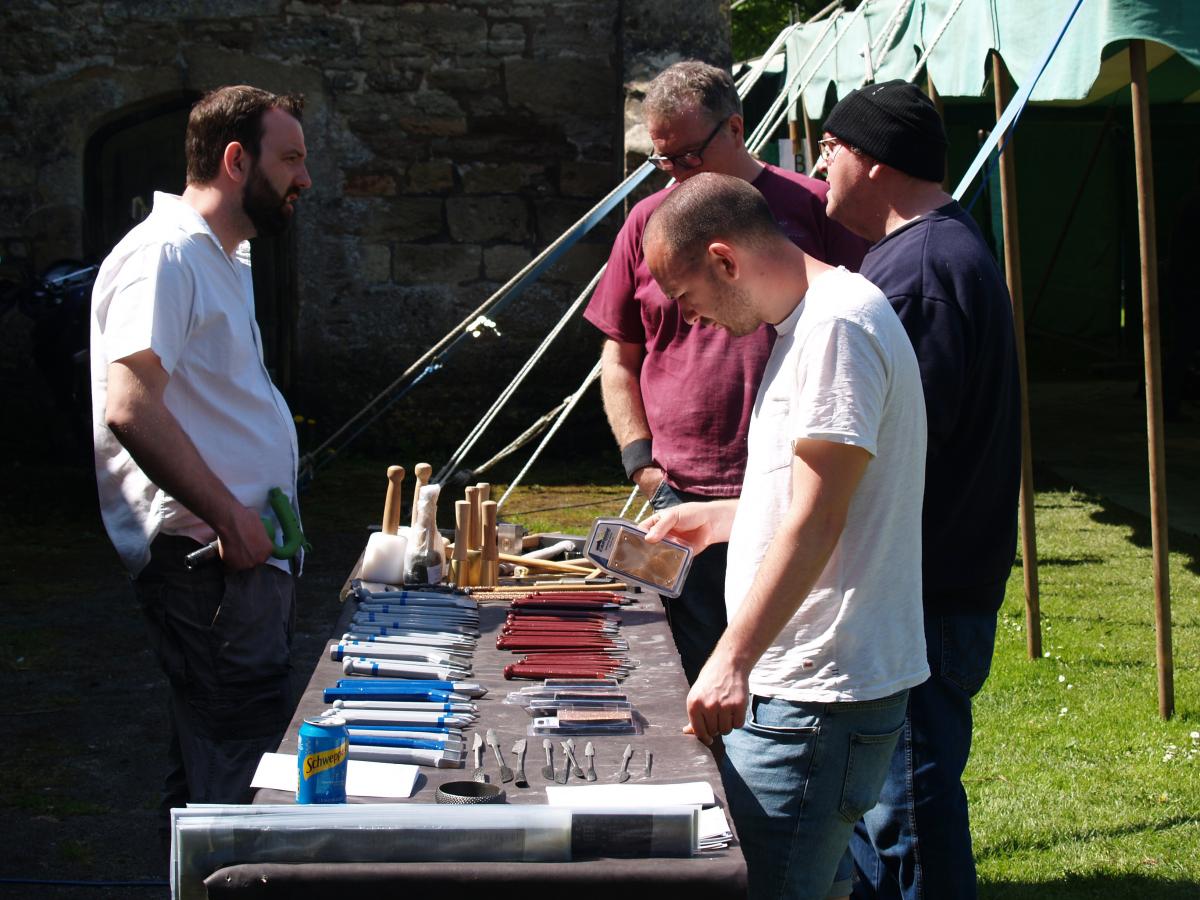 The stone used was Hartham Park Bath Stone, blocks of which were donated by Lovell Stone Group and sawn six sides for the masons to use by Wells Cathedral Stonemasons (a private company for many years although retaining the name that indicates its roots). Even the marquee from Glastonbury Marquees came at a specially discounted rate in support of the event and auctioneer Allen Mechen from local auctioneers McCubbing & Redfern gave his time to run the auction of the works produced over the weekend at the end of the event, raising more than £6,000. Those who bought the pieces certainly all got a bargain. 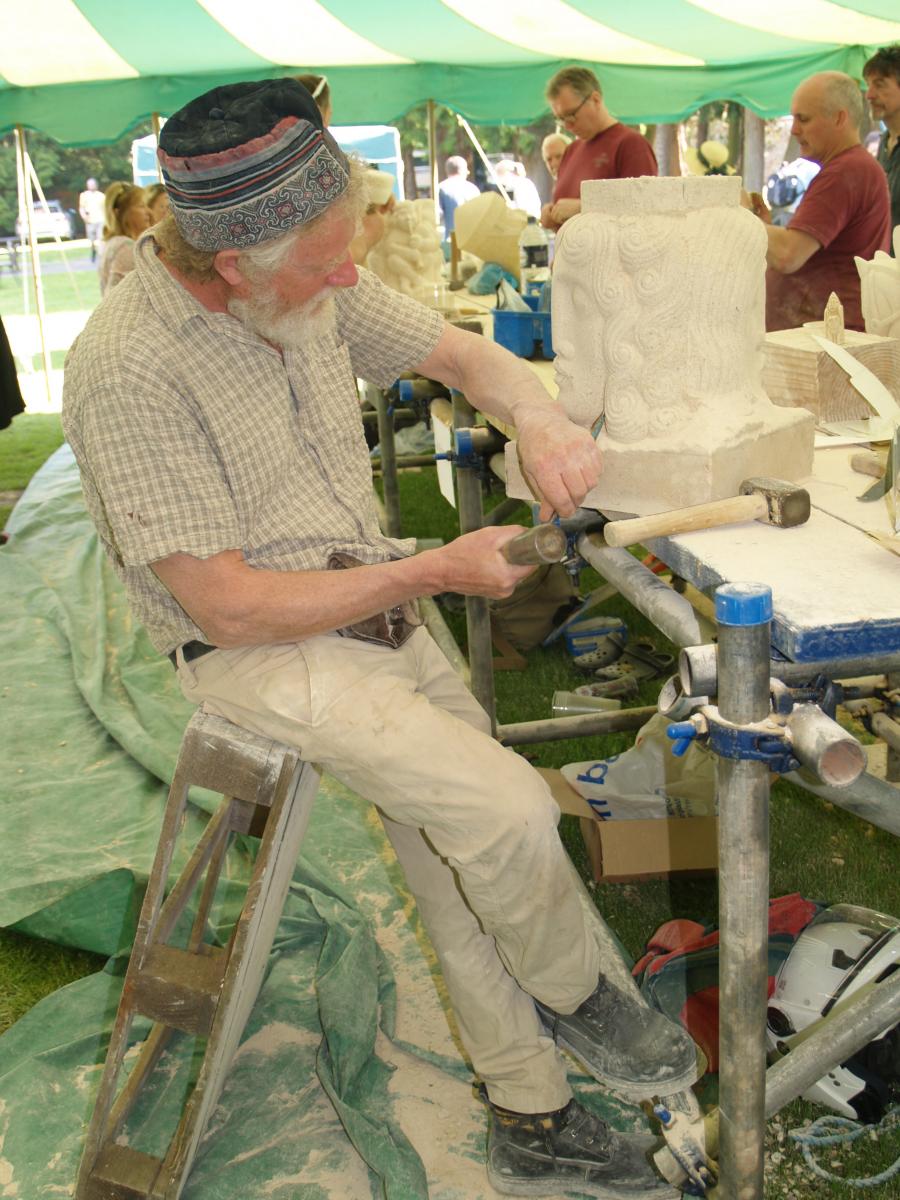 Paul Roddan ran an excellent event, cheerful throughout as he made sure the creature comforts of the carvers were catered for. He was so pleased with the Festival and the camaraderie among the masons and carvers that he now wants to make it an annual event. 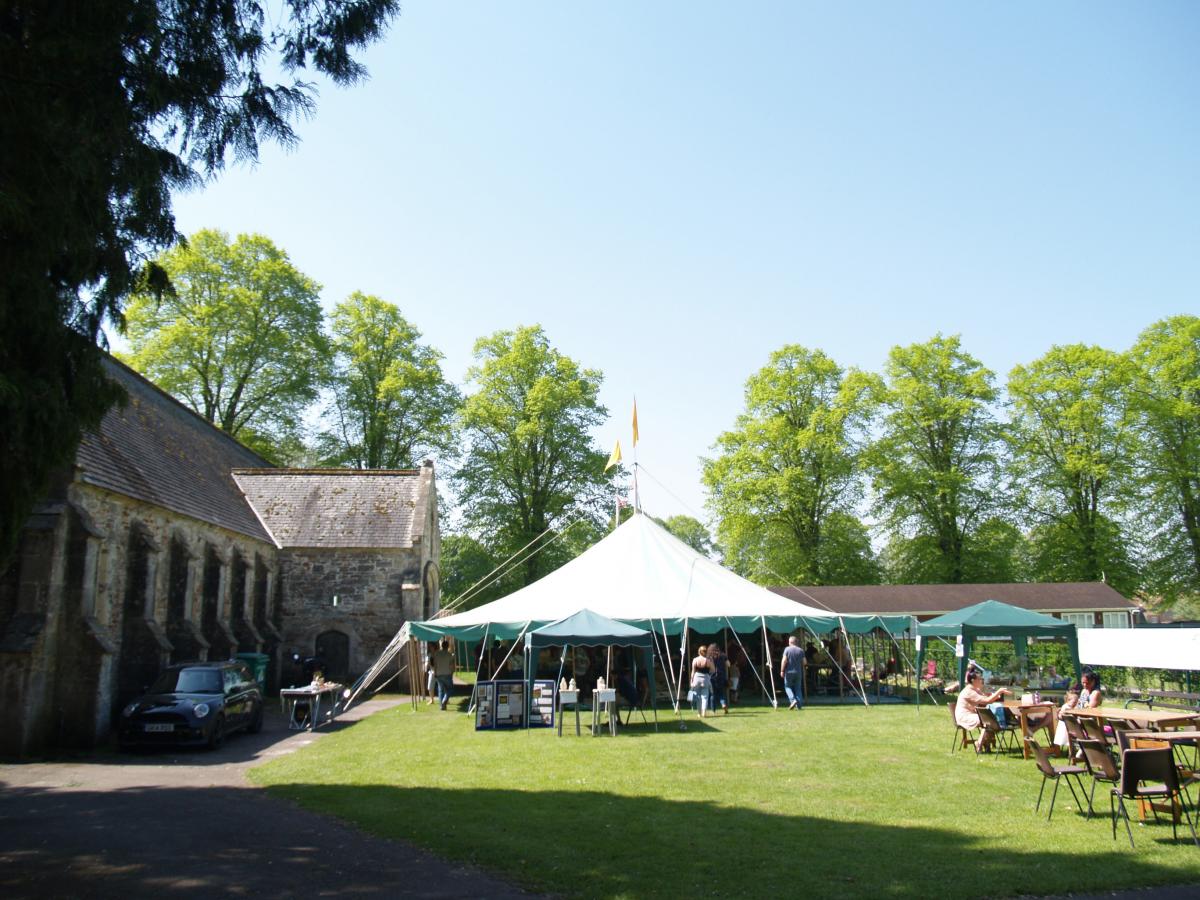 Up next is the European Stone Festival in Saverne, France, 25-27 May, followed by the Winchester Cathedral Stone Festival 15-17 June, York Stone Carving Festival 17-18 August, and Gloucester Stone Carving Festival 25-27 August. And the Dry Stone Wallers are having a walling competition in Kirkby Lonsdale, Cumbria, on 20 May to celebrate the 50th anniversary of the Dry Stone Walling Association.