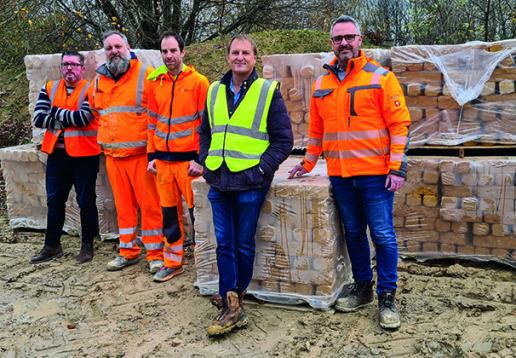 Nicholas Johnston with (on the left of the picture) Brendan Low, an Estimator; Jeremy Dyer, the former Stanley’s Manager; and Oathill Quarry Manager Mike Hughes. On the right is Paul Keyte, JQG Director of Operations. They are at the newly acquired Stanleys Quarry.

Johnston Quarry Group has taken over Stanleys Quarry in the Cotswolds and completed a £1million investment in new offices and weighbridge at Ropsley Quarry in Lincolnshire to continue its growth in the South of England.

Based at Great Tew on the edge of the Cotswolds, Johnston Quarry Group has increased its processing capacity by taking over Ian Bond’s Stanleys Quarry, which is also in the Cotswolds, at Chipping Campden, Gloucestershire.

Stone has not been extracted from Stanleys Quarry for some years but the company continued to cut and work stone it bought from other quarries at its processing facility – and a lot of the stone it bought came from Johnston Quarry Group’s Oathill, Guiting and Bath Stone quarries.

Stanleys' established and respected reputation made it one of the Johnston Group’s best customers, so when Ian Bond approached Nicholas Johnston, who owns Johnston Quarry Group (JQG), to see if the Group wanted to buy Stanleys, he received an enthusiastic response.

Stanleys will join the other Cotswold assets under the direction of Paul Keyte, who joined JQG from Stanleys in 2008. It will mean JQG’s stone quarried in the Cotswolds can be processed in the Cotswolds, so it does not have be transported so far. It will come under the Johnson Quarry Group banner, but will be keeping its website because of its ideal address: cotswoldstone.com.

At the same time Johnston Quarry Group has re-opened Ropsley Quarry in South Lincolnshire, where it has spent £1million on a new weighbridge, wheel wash, offices, quarry access and haul route.

Nicholas Johnston, who formed the Johnston Quarry Group in 2007, initially to sell the ironstone extracted from his Great Tew Estate and expanding with the acquisition of Cotswold, Lincolnshire and Bath Stone quarries, believes there is a strong future for British stone.

In 2019, when JQG had just re-opened Guiting Quarry in the Cotswolds, Nicholas told Natural Stone Specialist: “Johnston Quarry Group and Bath Stone Group continue to invest in the growth of the UK domestic natural stone market. We believe that planners, specifiers and architects can do more and should do more to promote sustainable and local British stone over alternative imported or high energy products. We should have more natural stone going into housing and less energy inefficient brick, which is not even that much cheaper and the houses don’t sell as well.

“It’s important that we keep telling and selling the stone industry story. A stone house, designed and built sensibly, should be the norm in towns and villages where stone is the traditional building material.”

At that time the main uncertainty came from Brexit, which Nicholas felt (with some caveats) would eventually benefit British manufacturers in general. He could not have envisaged the shock that was in store for the world in 2020 from the Covid-19 pandemic, but in spite of that remains optimistic. “The road forward is exciting,” he says. “I think everyone in the stone industry has a good opportunity in the next 10 years. If we can have a balanced economy without any of these emergency shocks I think the stone industry, the quarry industry, all looks pretty rosy.”

Speaking as England was undergoing its second lockdown last month (November), Nicholas said: “Financially, if I’m honest, we haven’t really noticed that much difference. We’ve had quite a strong year. We’ve got a good geographical regional spread and we’re noticing that some of Prime Minister Boris Johnson’s rebalancing looks as if it’s happening.”

Although in March and April many building sites shut down in the face of the coronavirus, some, especially outside London, continued working. Being a unique experience, nobody was entirely sure what to do for the best, although eventually it was clear contruction work needed to continue.

Last month, sites stayed open, although JQG was hoping demand might slow a little to enable it to build up its stock holding of block. It has substantial reserves but not much on the ground waiting to be processed.

The Johnson Quarry Group stayed open throughout the first lockdown. Although some people (about 10% of the overall workforce) at the Bath Stone business in Limpley Stoke and the processing plant at Banbury were furloughed for a few weeks, BSG continued to supply those customers that carried on working and others when they resumed working.

It has retained the full complement of 12 people at Stanleys Quarry. Paul Keyte says some of the BV masonry saws and a Bidese wire saw in the factory were there when he was running the works previously, so could do with being replaced, which will be done in the normal course of continual investment in  technology by the Group.

Staff have been recruited for Ropsley, with its 75 acres of freehold reserves of Lincolnshire limestone next to the A52 between Grantham and Boston. And in June, JQG also recruited Julian Veal to the senior management to head operations in Oxford.

Julian was previously with independent aggregates business Huntsmans and then Breedon (when it bought Huntsmans). Nicholas says he is already making an impact and there are two quarry opportunities in North Oxfordshire that could be open to JQG.

Nicholas says south Lincolnshire and the Cotswolds have been particularly robust markets, hence JQG’s moves in those areas.

Bath Stone, on the other hand, has become increasingly competitive with not many high-end residential ashlar projects being undertaken to create demand. Ironstone sales have also been subdued. House purchases have tended to focus on the cheaper end of the market where help to buy and the stamp duty holiday have made more of a difference but stone is less likely to be used.

Overall, says Nicholas, sales this year have been maintained and will be about £12-13million with EBITDA (earnings before interest, tax, depreciation and amortisation) of £4million. “We are beginning to grow into a decent Group,” he says, and attributes the success to focussing on the core business of extracting and supplying stone products without diversifying into other areas such as logistics.

JQG also minimises waste and turns almost all the minerals extracted into a saleable product, from high value masonry to building stone and lower value but higher volume aggregates and aggricultural lime.

It plans to continue that model at Ropsley, with no plans to open a processing plant for the building stone and masonry there. Steve Johnson, Director of Operations of the Lincolnshire limestone quarries, has good relationships with Goldholme and Churchfield, and will add blocks from Ropsley to the stone JQG will supply for them to process.

Next on the agenda is the opening of a new adit for Hartham Park Bath Stone underground quarry in Wiltshire. As we went to press, Section 106 site specific mitigation agreements were expected to be finalised with the planning authority any day.

The new adit will give JQG access to the reserves previously owned by Hanson, including the premium Box Ground beds. The planning permission also includes a processing plant to be built on the surface, so the stone can come out of the mine and straight into the factory so it does not have to be transported for processing, minimising its encapsulated carbon content.

While it does not usually take much to divert people’s attention from environmental issues, it does not seem to have happened with the coronavirus. Commitments to carbon reduction have been coming thick and fast, and are not the only potential benefit for natural stone in the Planning for the Future White Paper published by the government in August.

The White Paper includes numerous photographs of some major stone projects as examples of good development and built heritage. It has a heavy emphasis on ‘local’ involvement in planning and ensuring developments are appropriate to their locality, specifically including the materials used. Stone Federation has responded in a strongly favourable way to the document and says it is a great opportunity for stone that should not be missed. (The consultation period is now over, but if you want to see the White Paper you can download it from: bit.ly/PFTFwhitepaper.)

Nicholas Johnston does not dissent. “We feel pretty confident,” he says. “If there’s one thing the political parties all seem to agree on its the need for more housing.

“We like the government recognising that boosting construction is one of the best ways out of the current economic crisis. And we also are excited the government is finally understanding the message that building beautifully requires domestic, regional natural stone being used rather than reconstituted stone or brick.

“The UK has a large amount of wonderful natural stone reserves and it’s wholly appropriate that they look at using those reserves more productively for the built en-vironment.”

Below. Ropsley Quarry, which is re-opening after a £1million investment. 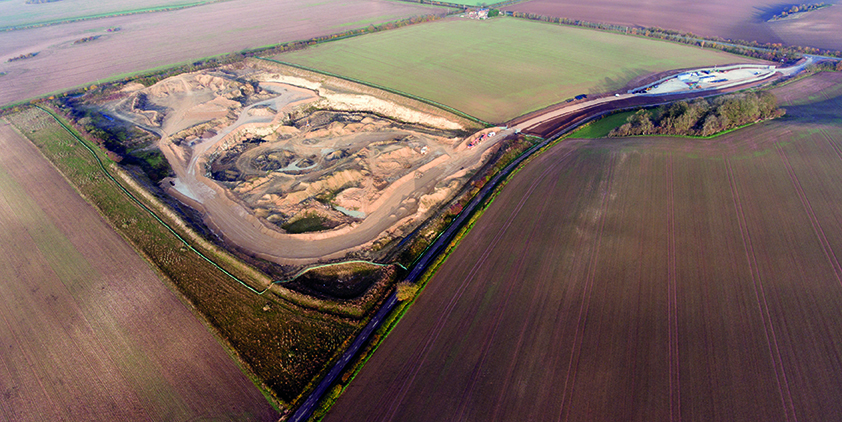