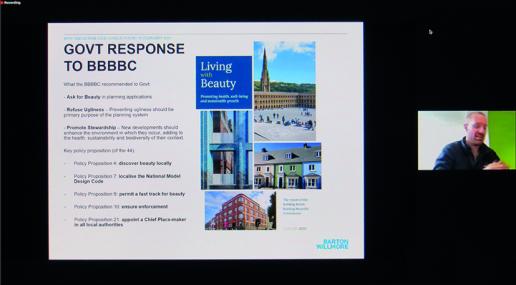 Sam Thistlethwaite talking to Stone Federation members on Zoom in February about changes to the planning system.

The fast-track changes to planning being made by the government have now reached public consultation on the National Planning Policy Framework (NPPF) and National Model Design Code (NMDC).

The consultation began on 30 January and ends on 27 March. To see the proposed changes and comment on them go to bit.ly/NPPFstone.

Stone Federation members got an update on developments from the Federation’s planning consultant, Sam Thistlethwaite, on Zoom in February.

Sam Thistlethwaite, of planning and design consultancy Barton Willmore, wrote a response in October on behalf of Stone Federation to the government proposals for planning reform set out in its White Paper ‘Planning for the Future’.

He has now been working with the Federation to submit a response to the NPPF and NMDC consultation.

He suggested the Stone Federation’s response to the NPPF consultation might be to support the changes in principle but ensure the link between dimension stone and good design encompasses new build and is not confined to heritage buildings and areas; that dimension stone can serve distant markets as well as local markets; and that it should be included as a nationally significant mineral on the basis of design quality.

Nobody is going to oppose a drive for beauty and the stone industry is likely to support a strengthening of the planning enforcement system, but Sam said links need to be made between design codes and the supply of indigenous materials, with stone producers seen as key stakeholders in that process.

To that end, he proposed Stone Federation Quarry Forum members should begin engaging with their local planning authorities now in order to have an input at an early stage of the process.

Stone Federation President Marcus Paine, who also owns Hutton Stone Company on the borders with Scotland, said the planning changes were probably stone’s big chance for greater recognition as a construction material and to fight back against being continually tripped up by specification changes.

Sam Thistlethwaite asked for Federation members to let him have examples of where specifications had been downgraded by builders and developers after planning permission had been obtained, as this would be beneficial to the stone industry’s case.

The cost of materials is not going to be disregarded in decision-making and Stone Federation members have often argued that they should be involved in design at an early stage so they can help designers make the most economical use of stone, but such considerations  should be taken into account at the planning stage, not be ‘value engineered’ at a later stage.

There is a lot of talk about ‘beauty’ in the government’s approach to planning. The body established to look into planning is called the Build Better Build Beautiful Commission (BBBBC). Its report last year was called Living With Beauty and, helpfully for the stone industry, contained a lot of pictures of stone buildings and landscaping.

Beauty is, of course, subjective and the government wants its interpretation to be at a local level, albeit guided by the National Model Design Code. The proposal is to appoint somebody to the role of ‘Chief Place Maker’ at each planning authority to oversee the interpretation of ‘beauty’ and enforce it.

Local authorities are often not good at enforcing planning requirements and will accept retrospective applications to change them after they have been contravened. The NPPF changes propose stronger enforcement.