Can you help trace paving stolen from new garden of remembrance? 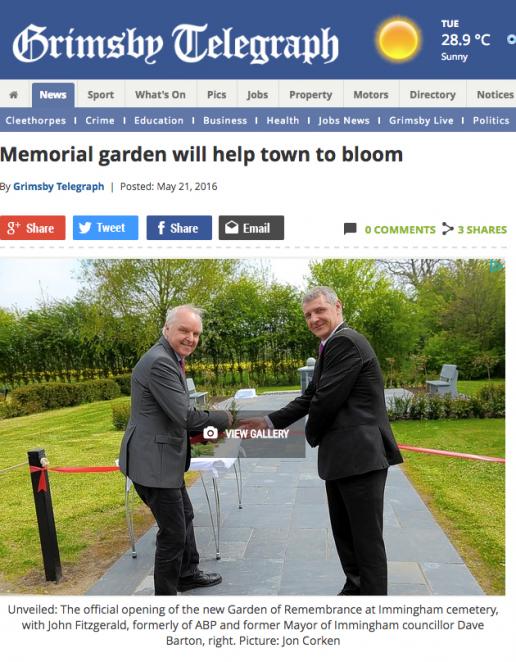 The report on the Grimsby Telegraph website in May when the Garden of remembrance was opened (go to the website).

Thieves have stolen the 'Black Slate' paving slabs from a new garden of remembrance opened in May in a cemetery at Immingham, North East Lincolnshire.

The riven dark shale slabs, about 30m2 of them from ethical importer Natural Paving Products, were taken between Saturday afternoon (16 July) and Sunday morning. They had been taken up because they had become loose and Immingham Town Council, which owns the cemetery, had decided to have them relaid. They had been stacked near a hedgerow waiting to be relaid.

The Council has estimated replacement paving could cost in the region of £2,500.

The Mayor of Immingham, Cllr Stewart Swinburn, is quoted by the local newspaper, the Grimsby Telegraph, as calling those responsible "mindless morons". He has said CCTV might have to be installed in the cemetery in Mill Lane as a result.

"It is absolutely despicable that someone thinks it is fine to steal from a cemetery," he said. "I don't know what to say. I am gobsmacked and absolutely distraught about it.

"So much work has been put into the Garden of Remembrance and now some mindless morons have come and spoilt it for the majority."

The £12,500 Garden of Remembrance project was officially unveiled by the council in May. It had been made possible by funding from Associated British Ports (ABP), Costain, Immingham In Bloom, One Voice and Immingham Town Council.

The garden is a place for mourners to remember their loved ones. It was described as a focal point for the town and features benches, raised urns and a central feature where memorial plaques are to be fitted.

Cllr Swinburn said: "We will replace the slabs. We will not be beaten by these people."

Speaking directly to those responsible, he added: "Whoever you are, you won't beat us – the community will win."

If anyone in the trade has any information about the theft they should call Humberside Police on 101 or Immingham Town Council on 01469 572763.