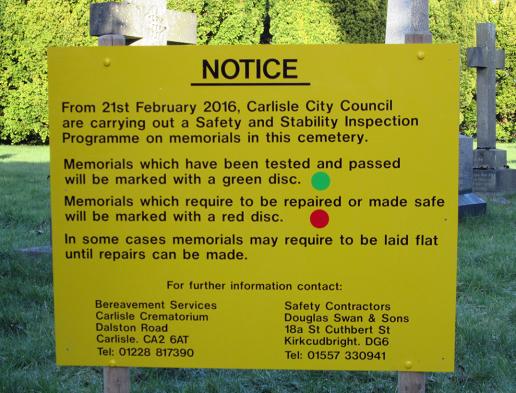 Following the death of a boy in a Glasgow cemetery in 2015 (read about that here), memorial mason Douglas Swan & Sons was contracted to carry out a safety report in another cemetery for Glasgow Council. Dougie Swan, the Senior Partner of the company and a former President of the National Association of Memorial Masons, reports on the work his company carried out, assisted by Natural Stone Specialist columnist David Francis.

The Ministry of Justice published its guide to Managing the Safety of Burial Ground Memorials in January 2009 following accusations of over-zealous risk assessments in Cemeteries, Churchyards and Burial grounds across the country. In the guidance, it states “The requirement that any action to manage risks in burial grounds needs to be sensible, proportionate and undertaken in a sensitive way.” (You can download a PDF of the guidance at bit.ly/cemetery-safety.)

Since the guidance was issued there have been very few accidents or incidents reported. However, in May 2015 an eight-year-old boy was killed in a tragic accident when a monument fell on him while playing with two other friends in Caigton Cemetery, Glasgow. A fatal accident inquiry was held in 2016 to establish if the current guidance had been followed and if the guidance could prevent further incidents. The outcome is awaited.

As a result of the incident in Glasgow, Carlisle City Council Bereavement Services commissioned an inspection and test to be carried out on the memorials in its Stanwix Cemetery in February 2016. The Council put the proposed inspection work out to tender. It wanted a contractor with technical and practical knowledge as well as experience of testing memorials and who was familiar with the Ministry of Justice Guidelines.

The job was made much easier when the Council supplied us with a comprehensive database compiled over a considerable period of time by Michael Cartlidge of Carlisle City bereavement services team. There was also a comprehensive plan of the cemetery. We had to provide evidence of our qualifications to carry out the task and proof of public liability and indemnity insurance before being asked to provide a risk assessment and method statement to carry out a site survey.

The job specification was to test all memorials of 1.5m and over in the Cemetery, in accordance with the Ministry of Justice guidelines, and record the results. However, we suggested and the Council agreed that ALL the memorials should be tested in selected older sections of the cemetery and those of 1m and above in other areas.

The inspection also offered an opportunity to test the procedures developed for the Ministry of Justice Guidelines and check if the guidelines were still fit for purpose. David Francis (a columnist in Natural Stone Specialist magazine and consultant to British Standards), who had made a major contribution to the guidelines, was invited to take part in the exercise to evaluate the test procedures and offer any extra guidance he felt was required. 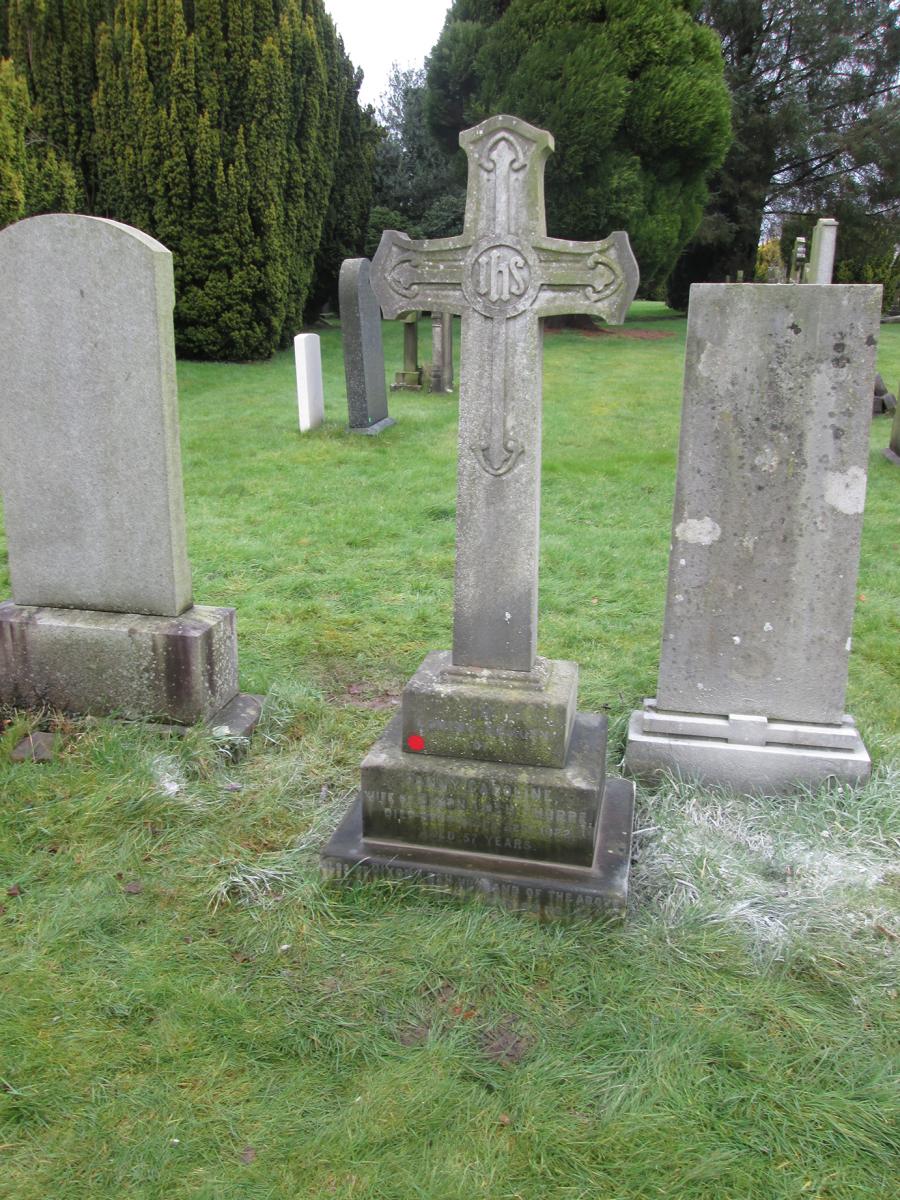 Notices were posted in the Cemetery a few weeks in advance of the tests starting, informing the public that memorial testing would be taking place from a given date, along with basic information about the testing and who to contact if they had any questions regarding the tests. Each memorial tested would be 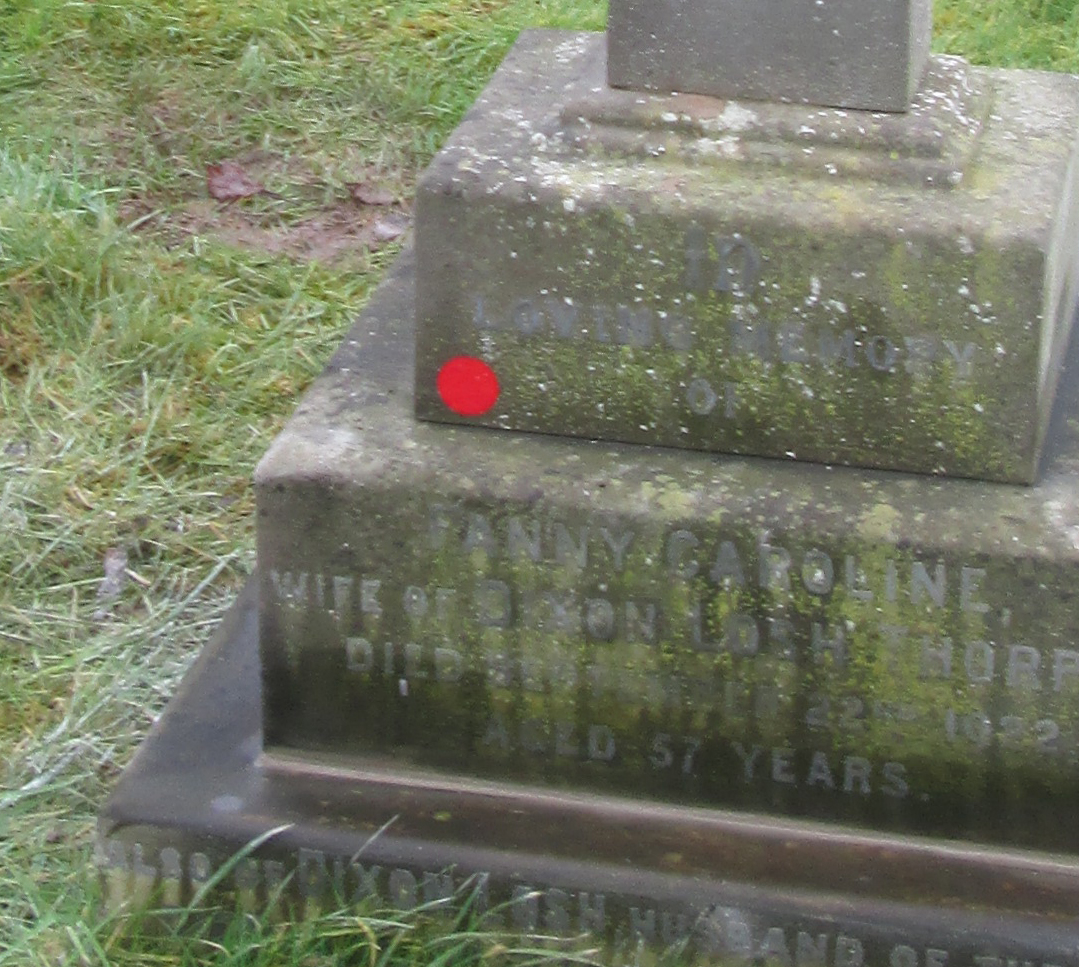 marked with a 30mm disc, green if it was safe and red if it was unsafe. Any memorials found to be of a high risk would be laid flat until repairs could be made.

The recording of the tests included each memorial being photographed, measured and marked according to the result of the test with the coloured disc which was attached to the memorial; these discs are degradable and discreet so as not to draw too much attention to those which failed.

Stanwix Cemetery was opened in 1887 and laid out in neat sections. The footpaths and roadways to this day are well maintained and there is a chapel in the centre of the cemetery which is sometimes used for funeral services. The toilets have been closed and although there is a cemetery keeper’s lodge, it is not occupied by a council employee. By mutual agreement the cemetery gates are locked and unlocked each day by the tenant. The cemetery is flat, with no slopes or inclines, which has assisted with maintaining the stability of the memorials. There are a number of large shrubs and bushes which, over time however, have engulfed some of the memorials. The memorials in the cemetery range in size from a 3.5m high obelisk and other substantial monuments to more modern smaller lawn memorials. Some of the older memorials and even some of the more modern memorials have sloped towards the graves, which is normal, and a few have begun to lean away from the grave area. Any memorial with a slope of over five degrees in any direction was also recorded. 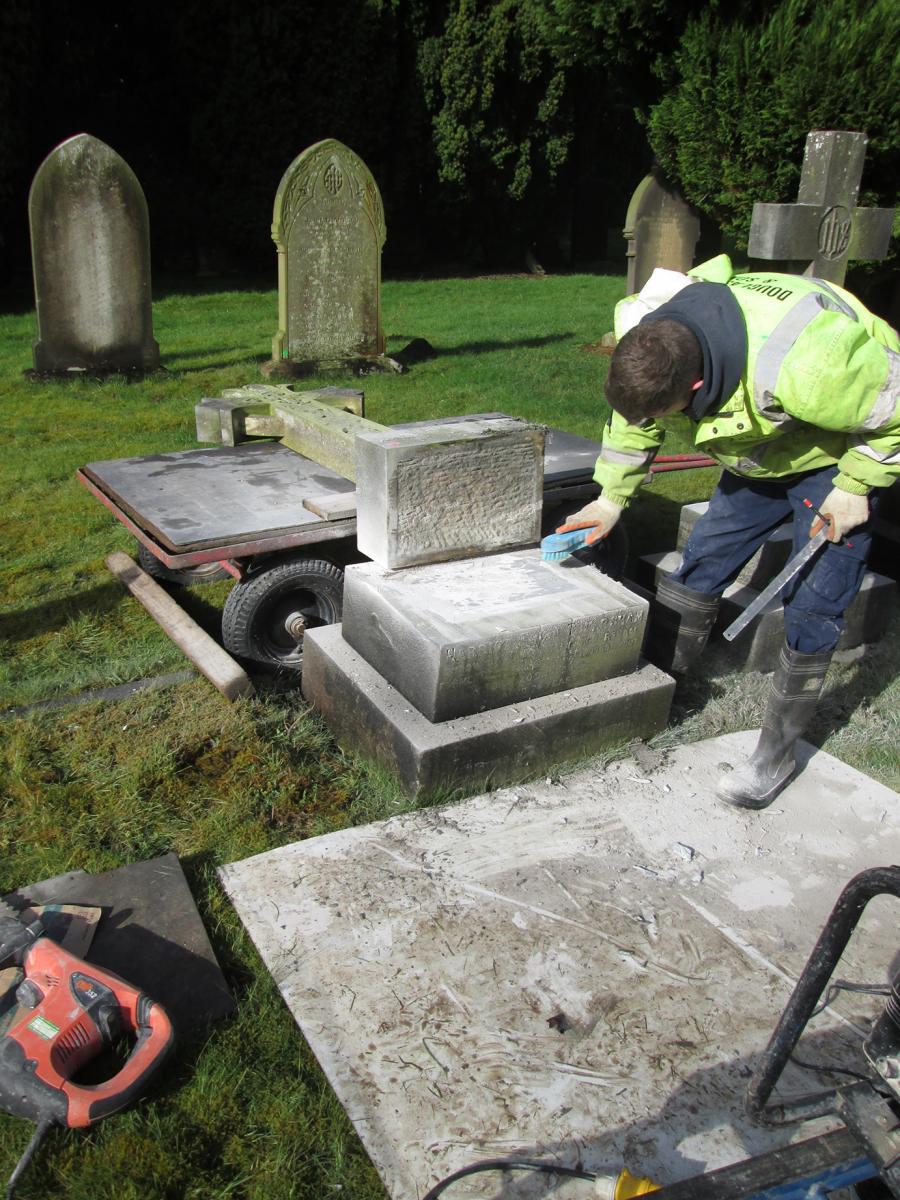 The inspection and test was applied to 559 memorials in the cemetery, with 75 determined to be unsafe and two an immediate high risk that were laid flat. 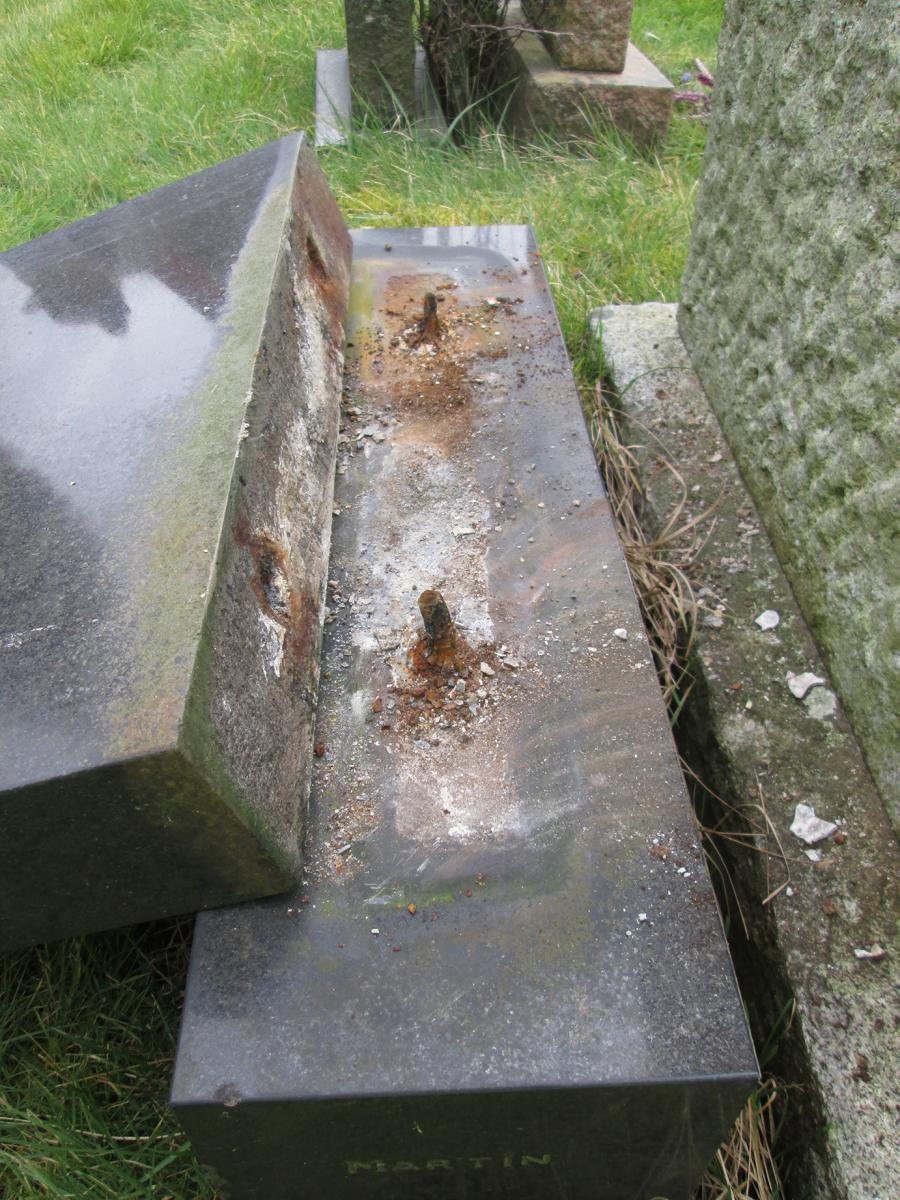 We were then tasked with making the memorials safe and reinstating the two that had been laid flat. The database was brought up to date and colour coded, a report on the inspection was compiled and the inspection concluded on 25 March.

During the inspection it was evident that for Health & Safety purposes, memorial inspections require a minimum of two personnel to be present at any time.

The availability of the database made the recording of the findings a much easier task, although it would have been possible to compile it as the inspection was taking place. David Francis was pleased to conclude that the Ministry of Justice guidance is fit for purpose and that, if it is followed diligently, it allows for comprehensive testing to take place without causing any unnecessary distress to bereaved families and others who value the great historical and environmental heritage of our cemeteries.

Carlisle City Council deserve praise for the immense work which has gone into transferring its old burial records on to a modern database, a task they have now also completed for other cemeteries in the city. This record will be invaluable and make future testing and recording a much simpler task. The Council has now commissioned an inspection and testing for its Upperby and St John’s cemeteries, which are ongoing, and are considering the same for the main Carlisle cemetery.

The Ministry of Justice Guidelines state quite clearly that: “Operators should do all that is necessary and practical to ensure that visitors and those working in burial grounds are not exposed to risks to their health and safety”. It goes on to say that: “The approach to managing memorial safety set out in the guidance involves the periodic assessment of memorials as part of a planned exercise or when anything has changed, for example a programme of major work or repair to the burial ground environment. It is for operators to decide on the frequency of this assessment. Where action is necessary following this assessment, measures to control any risks should be proportionate to the level of risk.”

Even more significant is the statement from the guidance which reads: “The enforcing authorities under the HSWA74 do not consider the risks from memorials to warrant inclusion in their proactive inspection regimes because of the low risk of injury. However, in the unlikely event of a serious accident, their inspectors may undertake an investigation. They will want assurance that operators had followed this guidance, had taken the sort of sensible, risk-based precautions set out, and that they had done all that is reasonably practicable in the circumstances. Inspectors recognise that even when all reasonably practicable precautions have been taken, incidents may still occur.”

Carlisle City Council has followed the Ministry of Justice guidance to the letter. It is clear it is not enough just to have people trained to carry out memorial inspections if that is where the matter ends. Inspections have to take place, the recording of the inspections has to be comprehensive and where action is required it must be taken.

Burial Authorities need to take heed of the accident that occurred in Glasgow and ensure the careful implementation of the Ministry of Justice guidance. Carlisle City Council has demonstrated that it can be done and the risk removed almost completely, without the need to level every memorial and monument.