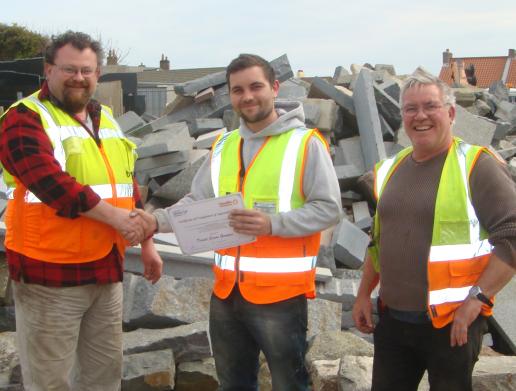 Lance Vaudin (left), Managing Director, hands Daniel Goodwin his Certificate of Completion of Apprenticeship. It is a proud moment for Daniel's dad, Simon Goodwin, who is also a Director of Guernsey Memorial Masons.

With red tape threatening to deprive a young monumental mason on Guernsey of a certificate commemorating the completion of his apprenticeship, his bosses have come up with their own solution for him.

It came about with Daniel Goodwin being apprenticed to Guernsey Memorial Masons, a company established by Simon Goodwin, Daniel's dad, and Lance Vaudin, of Vaudin Stonemasons Ltd on Guernsey, in 2000.

In 1976, Simon Goodwin had set out on his own States Registered Apprenticeship in Monumental Masonry.

The States of Guernsey is the government of Guernsey. The States didn’t have a college course for Monumental Masonry, so Simon Goodwin’s training was all in-house with his employer, Bordage Monumental Works.

Forty-one years later and The States still doesn't have a college course for monumental masons – understandably, as there would be little call for it.

So when Daniel came into the business he learnt his skills in-house in the same way as his dad had. It was thorough, with Guernsey Memorial Masons carrying out all the regular monumental works as well as more specialist aspects such as vault opening. The company also offers bespoke memorial fabrication, including rustic local designs.

When Daniel joined the business, Lance Vaudin, who is the Managing Director of Vaudin Stone, approached the States Apprenticeship Scheme Manager to see if Daniel could become a States Registered Apprentice. Lance was told Daniel would have to attend College – even if there were no relevant courses!

Lance: “Daniel has now served his apprenticeship with us and has become a skilled monumental mason." But when Lance approached The States to see if there was some way of signing off Daniel's indentures and recognising him as a qualified mason, he was told there was not.

Simon Goodwin says: “I had been awarded my Apprenticeship Indentures and it was a shame Daniel couldn’t have his.”

Lance is a firm believer that today there is too much emphasis placed on getting all sorts of qualifications that have limited importance in the real world. “As much as it can be useful and gives apprentices esteem, at the end of the day it’s what someone can do that matters.”

But Simon and Lance are proud of Daniel’s achievement and believed he should have some recognition of it. So they have produced their own Certificate of Completion of Apprenticeship that they have awarded to Daniel.

It lists the skills in which he is competent and is signed by Simon and Lance, so Daniel will have his seal of approval from two highly skilled practitioners with nearly 75 years' experience between them.

And that probably says more about his competences than a certificate from a college that does not even have a stonemasonry department ever could.