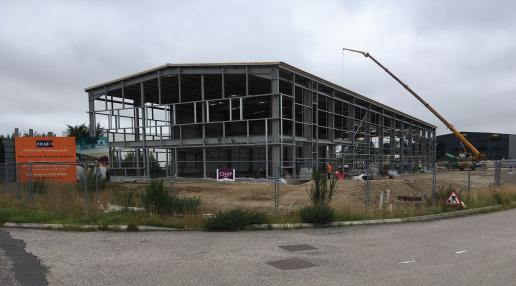 Memorial wholesaler A&J Robertson (Granite) Ltd of Aberdeen will be moving into new 1,800m2 premises next year that are currently under construction (pictured right).

The business, which supplies memorials across the UK, currently operates from premises in Aberdeen, which have been sold for development.

The company’s new premises are on an industrial site on the outskirts of Aberdeen. Being purpose built, they are designed for the easy flow of work through the factory, using 10tonne, 5tonne and 2tonne cranes that will run the 81m length of the building.

With the new premises will come new equipment, including several machines from Spielvogel – a Boa wire saw, two Birdie secondary saws, and a drilling machine that is an adaptation of the articulated Pelican. There will be Fickert & Winterling face polishers and new Goldman sandblasting cabinets from The Blast Shop.

The factory will include three births for hand polishing and three for masons, all with dust extraction. The final decision on which dust extraction system to use has not yet been made, although Graeme Robertson, the Managing Director, says it will probably be an ECS Eich system because they also favour an Eich water treatment plant and can get the two together.

As well as wholesaling memorials throughout the UK, A&J Robertson also has 30 memorial retail outlets, including four in London, and three fireplaces and stoves retail outlets in Scotland. Its largest outlet, in Aberdeen, also sells worktops. It is relocating but staying in the city centre.

In May, Robertsons was part of a consortium that opened a new crematorium at nearby Banchory. It has already handled more than 150 cremations.