Service commemorates 90th anniversay of the opening of the Menin Gate 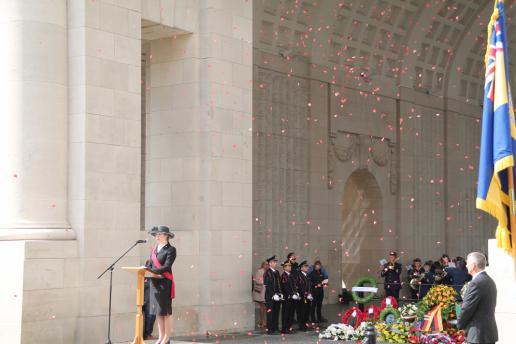 The ceremony on 24 July commemorating the 90th anniversary of the opening of the Menin Gate.

The Commonwealth War Graves Commission (CWGC) has marked the 90th anniversary of the Menin Gate’s unveiling and dedication with a ceremony at the memorial on 24 July.

The Menin Gate in Belgium was the first 'Memorial to the Missing' built after the First World War by the then Imperial (now Commonwealth) War Graves Commission.

The memorial bears the names of more than 54,000 officers and men who died in the Ypres battle during the First World War and whose graves are not known.

It also honours all those who served there, bearing an inscription devised by writer Rudyard Kipling, who was the first Literary Advisor to the Commission: To the armies of the British Empire who stood here from 1914 to 1918 and to those of their dead who have no known grave.

Speaking about the memorial, the CWGC’s Director General, Mrs Victoria Wallace said: "The Menin Gate has been the focus of pilgrimage for thousands for 90 years. The first great memorial to the missing, it is an extraordinarily special place of commemoration, and its significance has been enhanced by the devotions of the people of Ypres, who hold their daily Last Post event under its arches every evening. It is hugely gratifying to see so many young people visiting the Gate, ensuring that the names of the missing live forever."

The memorial was designed by Sir Reginald Blomfield with sculpture by Sir William Reid-Dick, and was unveiled by King Albert I of Belgium and Field Marshal Lord Plumer on 24 July 1927 in the presence of thousands of veterans and family members. Crowds lined the ramparts and the streets, and loudspeakers relayed the events to the market square. The unveiling was also broadcast by the BBC.

At the end of the ceremony buglers of the Somerset Light Infantry sounded the Last Post and pipers of the Scots Guards played a lament.

Soon afterwards, the act of sounding the Last Post became a daily ritual, led by the local fire brigade. It has been sounded under the arch every night at 8pm almost every day since, except during the Second World War when Belgium was again occupied. Today organised by the Last Post Association, the ceremony is often attended by thousands who have come to pay their respects.

The site of the Menin Gate was chosen because of the hundreds of thousands of men who passed through it on their way to the battlefields. It commemorates casualties from the forces of Australia, Canada, India, South Africa and the United Kingdom.

In his speech at the unveiling, Lord Plumer said: "It was resolved that here at Ypres, where so many of the 'Missing' are known to have fallen, there should be erected a memorial worthy of them which should give expression to the nation's gratitude for their sacrifice and its sympathy with those who mourned them. A memorial has been erected which, in its simple grandeur, fulfils this object, and now it can be said of each one in whose honour we are assembled here today: ‘He is not missing; he is here’."

To mark both the CWGC’s Centenary and the 90th anniversary of the Menin Gate, a photographic exhibition opened on the Ramparts next to the Menin Gate on 24 July.  The exhibition features images from the CWGC’s archive and gives a fascinating insight into the care of this much loved monument and the many CWGC war cemeteries in Flanders. The exhibition will run until the end of September.