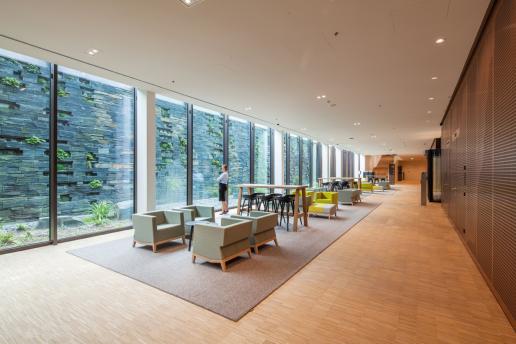 The Welsh Slate feature waterfall at the new €105million offices of Eurojust.

Natural slate walling and decorative aggregates from Welsh Slate are bringing a soothing calm to the new headquarters of an international crime agency.

The walling and decorative aggregates are part of Welsh Slate’s architectural portfolio of products, which also includes flooring and paving.

The Welsh Slate walling and decorative aggregates were specified by Heijmans, supplied through Lei Import in The Netherlands and installed by Roys Maatwerk.

The new building is in the Netherlands, where the crime agency’s personnel have relocated from two buildings into their combined new offices in The Hague’s World Forum / International Zone area.

Developed by the Central Government’s Real Estate Agency, the Ministry of Justice & Security, and the municipality, the stringent security measures required and the complexity of the location demanded a carefully integrated design solution.

Mecanoo architects designed a headquarters building as an elegant composition of two volumes – a high-rise tower and a low-rise plinth on the park side with a white composite façade. Windows are subtly tilted horizontally or vertically to reflect the sky and the surrounding landscape.

Eliano Felicio, marketing communications manager for Mecanoo architects, said: “We’re positive about the stone as it delivers the intended atmosphere and most of all responds to the security requirements that such a complex building demands.” By incorporating the security into the landscape design the building has managed to retain an open character.