Traditional stone roofing: Facing the challenge in the 21st century 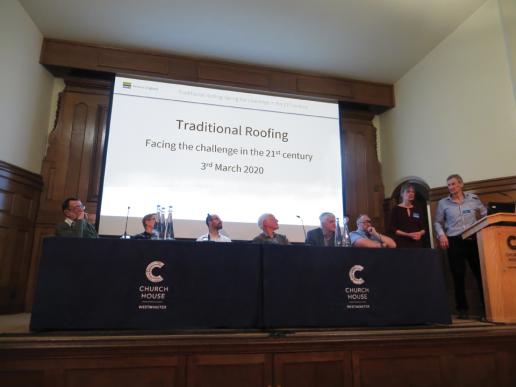 Roofs play a significant role in defining the built heritage. That much was clear from Historic England’s major conference on traditional roofing in London on 3 March entitled Traditional Roofing: Facing the Challenge in the 21st Century.

Historic England is running a campaign this year to highlight local identity. It has planned a series of events and activities to explore personal connections with local places and inspire people to share why the sense of local identity means so much to them.

Although some of the activities might have to be postponed or take a different form as a result of the coronavirus pandemic, Historic England still hopes to get the nation talking about the historic places that help define it and the diversity of its regions.

More than 100 high level conservation officers, architects, surveyors and others involved in the heritage sector – even one or two from stone industry contractors – attended the one-day conference in Church House, next to Westminster Abbey in London on 3 March, before such events had been clamped down on in response to Covid-19.

The event was organised by Alison Henry, Head of Building Conservation & Geospatial Survey at Historic England, and Senior Architectural Conservator Clara Willett, who were responsible for the Stone Conservation, Restoration & Repair CPDs presented in conjunction with the Natural Stone Industry Training Group (NSITG) that proved so popular last year. There was to have been another on 24 March in York but it did fall foul of Covid-19. 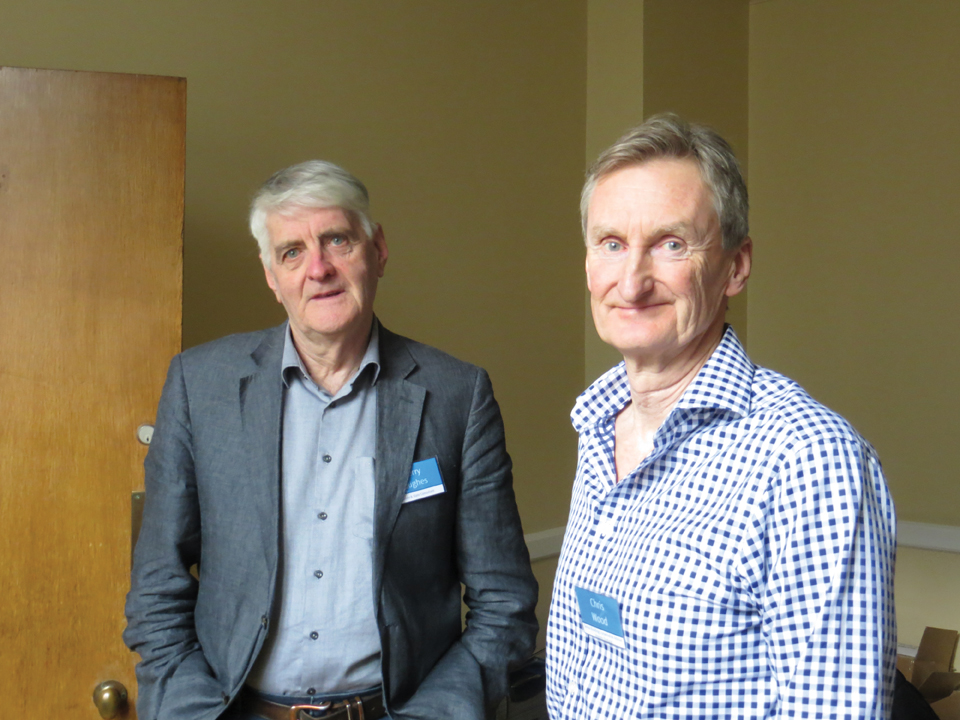 Among those speaking at the Traditional Roofing conference were Chris Wood and Terry Hughes. For Chris Wood, the conference was his last day with Historic England as its Senior Building Conservation Advisor before he retired. And Terry Hughes, of Stone & Slate Consultants, is also semi-retired. Both men have been major contributors to the increase in the wealth of knowledge about natural stone roofing during the past 20 years or so.

Their contributions can be found in Historic England technical publications and, in Terry’s case, on the Stone Roofing Association website (www.stoneroof.org.uk/cnts.html).

They were also involved in the Strategic Stone Study, which shows the sources and uses of stone on Geological Information System (GIS) maps created by the British Geological Survey. The information is available to interrogate free at bit.ly/buildingstone.

During the Traditional Roofing conference, Clara Willett provided an update about the Strategic Stone Study.

The study itself reached its conclusion in March, 13 years after it began and 16 years after it was instigated by the Symonds Report into the stone industry, which complained about the lack of accessible information about the sources and uses of British stone. An aim of the Symonds report was to ensure valuable mineral reserves were not effectively sterilised by being built upon.

Clara said during the conference that as the study is now at an end, calling it a study is no longer appropriate and the Strategic Stone Study is to be relaunched and given a higher profile as the Building Stone Database for England.

As part of the Strategic Stone Study the information gathered has also been used to create regional atlases that explain the geology and use of the stones in each particular region. They can be downloaded at bit.ly/stone-atlas as well as from the BGS maps. And they frequently have been, although Historic England does not know who has downloaded them nor why.

To try to find out they have decided to ask. If you go to bit.ly/stone-atlas you will be invited to participate in a survey about your use of the atlases. It is being carried out by Historic England in order to try to better understand how the atlases are being used in order to ensure they satisfy the requirements of those using them. “We know it’s not perfect and we’re looking for feedback,” said Clara.

She said the Building Stone Database for England could be used to help identify the stones in a building and find a source of matching stone for repairs. She said using the wrong stone “can have a devastating effect on the original stone” but English Heritage is aware that finding a matching stone is a challenge.

The Building Stone Database for England is divided into 47 regions. It contains information about 4,186 building stones from 12,643 sources, and 19,016 representative buildings where it has been used. “That’s why it’s taken so long,” said Clara. “We’re really pleased to have got this far.”

The Building Stone Database is, as its name suggests, about stones that have been used for building in general and is not specifically about roofs, although many of the stones used for roofing, including the best known (slate) are often building stones that can be split thinly. They usually come from the top of the quarry, where the stone has been exposed to most weathering and a mixture of moisture and freezing has rendered it easy to split (or rive) into roofing slates.

Of course, traditional roofs are not all stone. Clay and thatch also play a part and, on churches in particular, lead and other metals.

Whatever the material used, traditional roofs are under threat, said Duncan Wilson in his introduction to the conference. Those threats come from various sources, including: the weather; theft and vandalism; a shortage of appropriate skills and materials for repairs; a lack of awareness of vernacular detail.

He said such threats could be addressed in an intelligent way and what is now Historic England (and was previously English Heritage) has been at the forefront of developing those intelligent ways since it started raising awareness with its Roofs of England campaign in the 1990s and less formally before that.

There have been successes, such as the re-opening of the mine at Collyweston and the sourcing of Old Red Sandstone in Herefordshire. “But,” said Duncan, “the problem is by no means solved.” There were, he said, areas of the country where local stone was just not available.

Terry Hughes addressed the issue of reproducing not just the materials used but also the way they had been used. “What you don’t see when you look at a roof are the techniques that have been used to make the roof,” he said. “Just looking at the outside won’t tell you anything useful about the roof. What you need to do is to get underneath and look at it.”

He said that often did not happen because by the time anyone recognises a roof needs attention it is often because it has reached a point where it needs replacing. The typical response is to send in labourers to strip it off, resulting in all the historical evidence it contained of the original work being lost.

The way the materials have been used are important, Terry said. Craftsmen of old had learnt how the materials they used worked and what was the best way of using them in a roof so they kept the rain out. “They understood how water moves in a roof,” said Terry.

A roof has three important criteria: it has to keep the rain out; it must not blow away; it must last a long time. Roofers of old understood that was what was required of them and they achieved it. They did not use underlay and it was common to use lime mortar to lock the tiles in place. Roof slates (they are generically known as slates, even when they are limestone or sandstone) were almost inevitably top fixed by being hooked over battens. Air was expected to circulate to prevent the timbers in the roof from rotting.

Because stones around the country were not available in standard sizes or configurations, and because roofers tended to work in a particular area without much interaction with roofers of other areas, styles can be specific to quite small geographical areas. In one part of north Wales, Terry had found four buildings no more than 20 miles apart each with a distinctly different style of roofing. That is why roofs need analysing before they are repaired or replaced.

Terry finds video a useful way of recording the details of an original roof as it is dismantled these days.

He also had a warning against trying to ‘correct’ the original slater’s work or remove what might look like movement over time when replacing a roof. A hollow bowing of the roof, for example, might look like the timbers have bent but the roof might have been built like that to channel the water away from the edges, where it is more likely to find a way in.

Chris Wood reported on new guides and codes of practice on traditional roofing being produced by Historic England. They are due to be published next year and are the  result of more than 20 years of research.

Chris warned against the over use of British Standards on historic buildings, saying standards tend to be written by people making new products that they want to sell. He said BS 5534 has 100 pages of useful annexes including calculations for matters such as air pressure, but the body of the report involves materials such as underalys that might not be appropriate for re-slating old roofs.

Drs Bill Bordass and Brian Ridout presented reports on how the adoption of modern practices such as underlay and other sealing techniques can lead to moisture being trapped in an attic and resulting in materials, especially wood, rotting.

Chris Wood made another contribution about how trapped moisture could also lead to rotting of lead and how repairs had resulted in rot by changing the way the building coped with moisture.

Drs Bordass and Ridout pointed out that rain is not always the source of moisture. In many buildings it comes simply from people living in them – cooking, washing, even just breathing – creating moist air that, if it can rise into a cold, sealed attic and can’t get out, will condense and saturate the space.

Chris Wood said he appreciated it was difficult not to comply with British Standards because implicit in the adoption of them is compliance with Building Regulations. However, he said they might not be appropriate when it comes to re-roofing old buildings.

It was a whole day conference with a lot of useful material. There is not room here to include it all but one area covered that clearly needs addressing is the theft of metal – mostly, but not exclusively, lead – from church roofs, which is on the increase again.

It has become such a problem that Historic England now accepts Terne-coated stainless steel might have to be accepted as an alternative replacement when lead has been stolen, both to make repairs affordable and to make the theft of it not worth the risk. Stainless steel is not ideal because it is not pliable in the same way as lead is, but it can have a similar look.

Other anti-theft solutions are also recommended, such as installing CCTV cameras and avoiding leaving buildings unattended for too long. 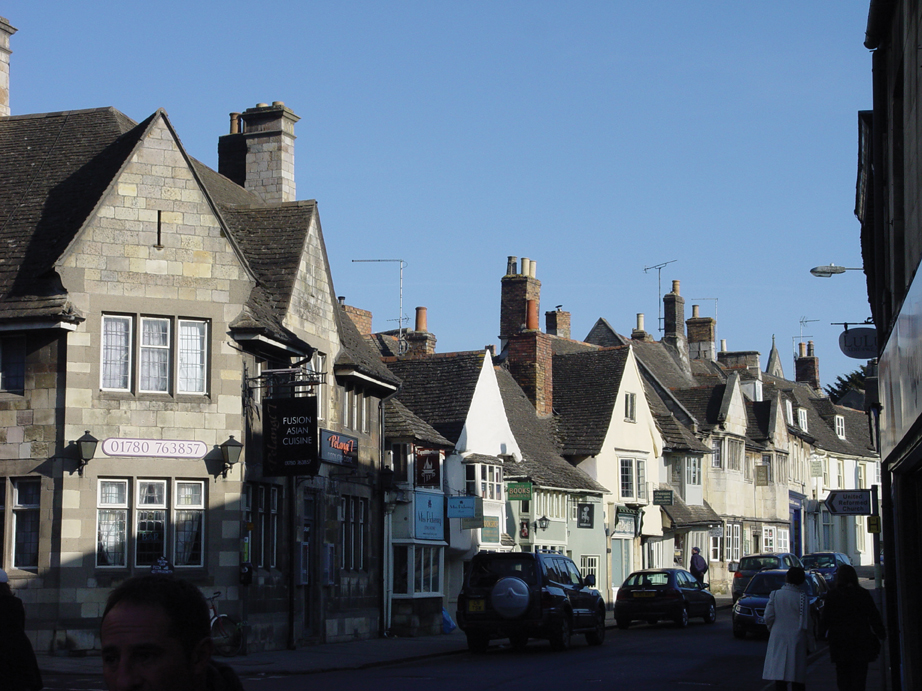