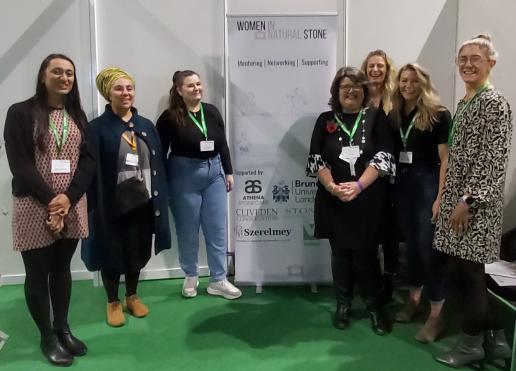 On the WINS stand at The Landscape Show are (left to right) Gauri Yennawar from Szerelmey, a visitor to the stand, Abigail Lewis of Szerelmey, Claire Wallbridge, who is chairing WINS, Tamsin Pickeral from Szerelmey, Hattie Davenport from Westminster Stone Co and Becca Cranfield from Athena Stone Care.

The new Women in Natural Stone (WINS) group was officially launched at The Landscape Show on 3 & 4 November. Claire Wallbridge, of the Natural Stone Industry Training Group (NSITG) and Stone Federation’s StoneTrain training arm, who chairs WINS, gave a presentation to talk about the group at a seminar held in association with the exhibition at the NEC, Birmingham.

She said afterwards: “It was brilliant. It was just an overwhelming response with support from so many people, both women and men. Men were interested because they see the recruitment of women as key to filling some of the skills gaps in the industry.

“As we have a sector recruitment issue, WINS will encourage new women recruits to our sector so they see the stone industry as a realistic career option. Networking was also a feature that was particularly liked.”

The launch was followed up by an early interest Zoom meeting attended by more than 20 people and membership of the group has now topped 50.

The WINS initiative was instigated by what Claire describes as the tremendous support the NSITG received for its National Apprenticeship Week events in February.

The NSITG took part in the Women In Construction promotion and saw some inspiring examples of women who are challenging a dated perception of construction, including the stone sector, as a male preserve. As a result, Claire Wallbridge proposed the idea of WINS, which is being backed by Stone Federation Great Britain, whose stand WINS was opposite at The Landscape Show.

It is an indication of the support the group has received that a request for sponsorship for ‘pop-ups’ to promote the group brought donations from major stone companies such as Szerelmey, Vetter, Stone Restoration Services, Athena Stone Care and Cliveden Conservation, as well as Brunel University, one of whose professors has joined the WINS group.

“I was delighted that many of our sector companies offered to look at women-focused training days to enhance our drive to offer positive role models and examples to young women making career options. Male directors and owners endorsed WINS with offers of encouraging their workforce to join and also offers of opportunities for hosting networking events,” said Claire.

She hopes that some WINS members will become ‘ambassadors’, taking the STEM (science, technology, engineering & maths) message out to schools and events. She says she has ‘ambassador kits’ from the Construction Industry Training Board (CITB), which instigated and finances the NSITG, for WINS members prepared to spread the stone and women in stone message.

Claire said the only downside to the encouraging official launch of WINS at The Landscape Show was that after all the Covid isolating a lot of people had colds and she ended up feeling “a little bit croaky”.

Anyone interested in joining WINS should email Claire Wallbridge on [email protected].