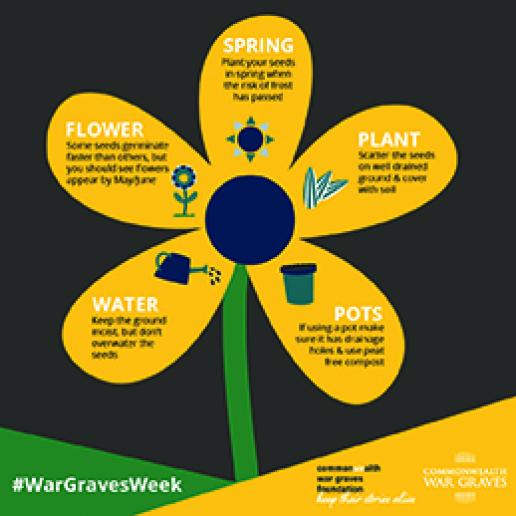 The Commonwealth War Graves Commission launches War Graves Week and asks you to plant wild flower seeds in memory of those who lost their lives.

The Commonwealth War Graves Commission (CWGC), which looks after the memorials to those who sacrificed their lives in the First and Second World Wars, is launching a new event –  War Graves Week.

It will be from 21 to 28 May this year and is intended to highlight the work of the CWGC and the people of the organisation who keep alive remembrance of the allied war dead. It will be marked by events at a number of the CWGC cemeteries and memorials in Great Britain.

During the week, CWGC will also present various online talks for the public to get involved in. There will be (suitably socially distanced as dictated by the  coronavirus) tours of and ceremonies at sites of remembrance across Britain.

It promises to be an immersive and inclusive programme to reveal CWGC’s work and the history of the organisation in all its variety, demonstrating its continuing relevance and importance as an organisation today.

This year, for example, it will be renovating its largest memorial at Thiepval, France, which commemorates those whose bodies were never found after the Battle of the Somme in the First World War. And it will be involved in the official opening in June of a new memorial in Normandy commemorating the troops under British command who died as a foothold was established in Europe in the battle against Hitler’s fascists. There is information about both projects, which include plenty of stonework, on this magazine’s website, stonespecialist.com.

The first part of War Graves Week is launched now with an invitation to order and plant wild flowers in remembrance. Packets of seeds can be ordered from www.cwgc.org/order-your-seeds and planted in an-ticipation of them blooming during War Graves Week in May. You might even win £200 worth of garden centre vouchers.