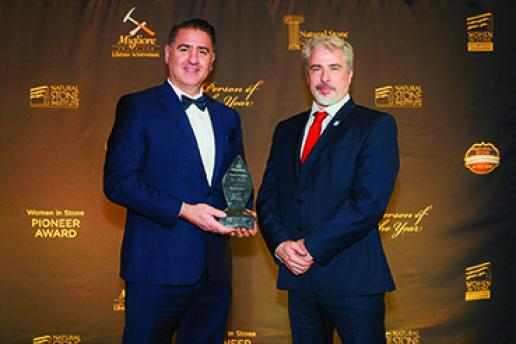 It certainly is an exceptional project – and so it should be with a budget of $3.5billion. It is Drexel Square in West Philadelphia.

The Natural Stone Institute is a trade association with more than 2,000 members. Its awards, like those of Stone Federation Great Britain’s Natural Stone Awards, are open to everyone, including the landscape and architectural design community.

“What a superb achievement,” he said, “and a major stepping stone (no pun intended) for our North American office. Working on this project has certainly taught us a great deal and we are very proud of what we have achieved.”

Drexel Square opened to the public in June last year, with the 1.3-acre park transforming an underused parking lot outside a railway station.

Its pathways follow the Earth’s meridian lines, with sparkling white granite contrasting with the grass and 23 fully-grown Dawn Redwood trees flanking the natural stone planters along the perimeter.

Ruan says: “The designers implemented a good balance between hard and soft surfaces, making the plaza an inviting place to enjoy. We are excited to see how this urban jewel develops over the next coming years and are extremely happy that we played a small part in its development.”

The Pinnacle Awards were presented in Las Vegas on 28 January. Ruan was there to accept the highly coveted award on behalf of CED.

Giles Heap, CED Stone Group’s Managing Director, praised the people-centric and organic designs of West8 and ShoP Architects on the project and the professionalism and knowledge of CED’s North America office.

“To be such a central part of the future history of that city was an honour, but to win such a prestigious award for our very first project in the USA is a testament to the amazing collaboration of all involved, and I thank the Natural Stone Institute for that recognition.”