Jordan to represent Britain in stonemasonry at post-Brexit EuroSkills 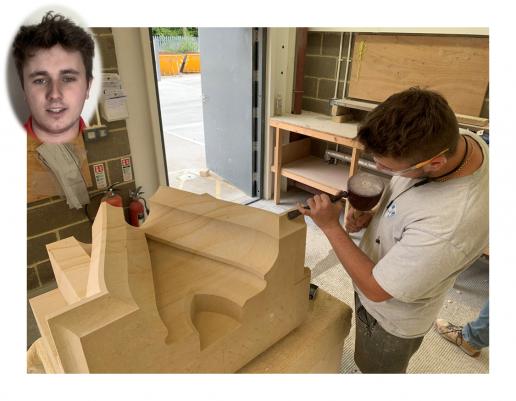 Apprentice stonemason Jordan Cliffe from Kent, who works at Canterbury Cathedral and trains at the Building Crafts College in London, will represent Team UK in stonemasonry in the first post-Brexit EuroSkills.

The members of Team UK will be heading to Austria in January (6-10) to do battle with more than 500 competitors from 28 Countries in 45 different skills disciplines, including Architectural Stonemasonry.

The competition in Graz, which was postponed due to the Covid crisis, is seen as an important indicator of how the UK’s skills systems measure up against key competitors across Europe.

Jordan, who is being trained and mentored by Marc Pate, WorldSkills UK Training Manager, has already been through an exhaustive year-long process of regional competition, national finals and team selection to get to this point. Now he faces months of intensive training, raising his standards to elite international level under the guidance of Marc.

Dr Neil Bentley-Gockmann OBE says: “Forget the Euros next season, this is going to be epic – and far more fundamental to the future of our country – demonstrating the next generation is developing the skills we need to help build back better our economy and remain internationally competitive.

“There has been so much conjecture as to how the United Kingdom will fare in terms of skills performance. The competition with 27 of our near neighbours across the Continent will be a brilliant benchmark and show what Team UK is made of.

“Congratulations to Jordan and I wish him and Marc the best of luck with their training for EuroSkills.”

Jordan said:  “I was thrilled when they said I had made it into Team UK. Training in lockdown hasn’t been easy but we have adapted our preparations and I’m so excited to be representing the country at EuroSkills. Canterbury Cathedral and Building Crafts College have been really supportive,. I can’t wait to get out to Austria and compete.”

Well done Jordan and Marc, see you in Graz!!