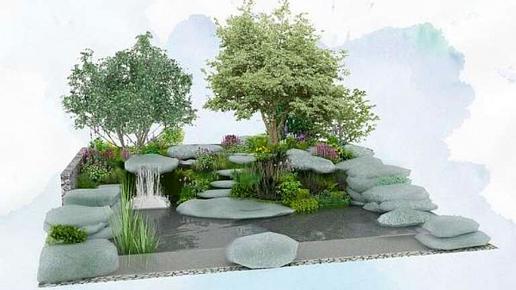 Sarah Eberle's design for The Bible Society’s Psalm 23 Garden, for which CED has supplied the stone.

For the first time ever, Chelsea Flower Show is being held this month (21-26 September) rather than in the spring. The formula is the same, even if the timing might present some new challenges for the gardeners regarding the plants on display.

Garden materials supply company CED Stone Group, which specialises in natural stone from its six depots around the UK, has been a regular contributor to Chelsea for many years, providing a wide variety of stone for the gardens.

This year is no exception. And one of the gardens it has supplied stone for is The Bible Society’s Psalm 23 Garden. Psalm 23 is The Lord’s My Shepherd. Although there are no sheep in the garden, multi award-winning designer Sarah Eberle has used cues from the psalm in her design – green pastures, still waters, and even the valley of the shadow of death, although she presents it as leading to a place of restoration and sanctuary.

Inspiration for the design came from the landscape of Dartmoor, Sarah's childhood home.

The ambitious design required some large boulders, so Sarah travelled north to meet CED’s boulder hunter, Tony Mason, based in the Scottish Highlands.

Tony heads CED’s North of Scotland operation and sources boulders and rockery for the company’s depots nationwide and for special projects as they arise. Tony has been with the company for more than 22 years and knows a thing or two about sourcing boulders.

Sarah's first boulder hunting expedition was in March 2020, when Tony took her to a couple of farms where Gabbro boulders are stockpiled. Gabbro boulders are formed by glaciation, although they have not travelled far and are not broken up or worn as smooth and round, as are some glacial boulders.

Sarah selected 14 of the boulders for the Psalm 23 garden. They were moved to a safe site on the farm, where they remained for a little longer than first expected due to Chelsea being cancelled last year.

With RHS Chelsea Flower Show returning this year, albeit later in the year than usual, in June Sarah again made the trip north, this time accompanied by Mark Gregory from Landform Consultants, the contractor working on the show garden. They once again met with Tony and took another trip to the boulder fields, with Mark also choosing products for the garden walling and river bed at CED’s North of Scotland depot.