The 'Cornerstone' uniting a community in London

Tonight (10 July) in a railway arch near London Bridge railway station, mason artist Austin Emery is holding a fund-raising event to try to raise the outstanding £28,000 for a community stone art project in Bermondsey, London.

The entrance to tonight's event is through the gate diagonally opposite Wendex auto rental and repair shop at 43 Barnham Street, SE1 2UU. It is in one of the south side railway arches in Crucifix Lane behind the Whites Grounds skate park coming along from London Bridge railway station.

You can find out about the project here, and if you can't get along to tonight's event and would like to make a contribution you can also do so at www.spacehive.com/cornerstone. Fund-raising continues until 12 August. The names of sponsors will appear on a stainless steel plaque next to that of the Mayor of London to become part of the legacy of the artwork when it is installed. The intention is to have it in place on the corner of Bermondsey Street and Whites Grounds in the Whites Grounds estate, owned by Southwark council, in time for the Bermondsey Street Festival in September next year.

The sculpture is made up of contributions from more than 100 adults and children using Bath Stone and Portland stone reclaimed from the demolition of buildings in London. The contributions from the public are in Bath Stone because it is easier for them to carve. Austin has kept some of the signs of the previous use of the Portland stone to show its history, even down to drill marks left by quarrymen and builders.

The completed piece will weigh about 20 tonnes... or, as Austin says, as much as three wooly mammoths.

The Cornerstone public collaboration art piece is intended to solidify connections across the local community, London and beyond by bringing people together using stone carving as a tool to enhance social cohesion in the estate where Austin Emery once lived.

He is a trained stonemason who turned sculptor thanks to a Winston Churchill Memorial Trust Fellowship that financed a trip to Studio Sem in Pietrasanta, Italy. It gave him the opportunity to realise his dream of going from a skilled stonemason carver to an artist sculptor. He was born in Canada and these days practices his art in both London and Toronto.

Cornerstone follows the success of The Shared (2014), an award-winning sculpture created through a similar process by Austin working closely with this community over the past 10 years using the 'social fabric' of people, materials and space to create public art, telling stories stitched together with stone that is often reclaimed, reinvigorating history and creating fresh heritage.

"We are completely thrilled to have received the Mayor’s largest possible pledge of support for our project," says Austin.

"This project has brought together so many different people, now including the Mayor of London! Let’s see who will chip in the balance and grab this golden opportunity to put their name next to the Mayor’s to become part of this truly unique sculpture, which is quite literally an embodiment of the expression of the community carved in stone."

Pieces of stone, hand-carved by children and adult participants from Whites Grounds Estate, Bermondsey Street and the wider community during open public workshops on the estate, will be permanently assembled into a totemic monument alongside stone fragments of historic London, including Southwark Cathedral, Westminster Abbey, Houses of Parliament and even bones recovered from the River Thames.

Together this will form a living art heritage, a landmark connecting people across time, social and geographical boundaries, with the work of yesterday’s stonemasons existing alongside the contemporary work of today’s community.

Austin, who became a sculptor describes himself as a 'streetcarver', says: "Our project helps overcome the divisive challenges of gentrification and the ever increasing social gap within inner city multi-cultural areas. By celebrating our diversity and creating opportunity for life-long established Londoners to work alongside immigrant newcomers, we form bonds based on equality, mutual respect and positive partnerships."

"This sculpture will exist through time beyond our lives into the future. The opportunity to feel connected to the creation and realisation of this heritage gives participants and pledge supporters a rare and profound chance to truly make their mark on London, with their belonging 'set in stone'."

Below is a computer-generated picture of what the 'Cornerstone' is intended to look like on the corner of Bermondsey Street and Whites Grounds in the Whites Grounds estate. 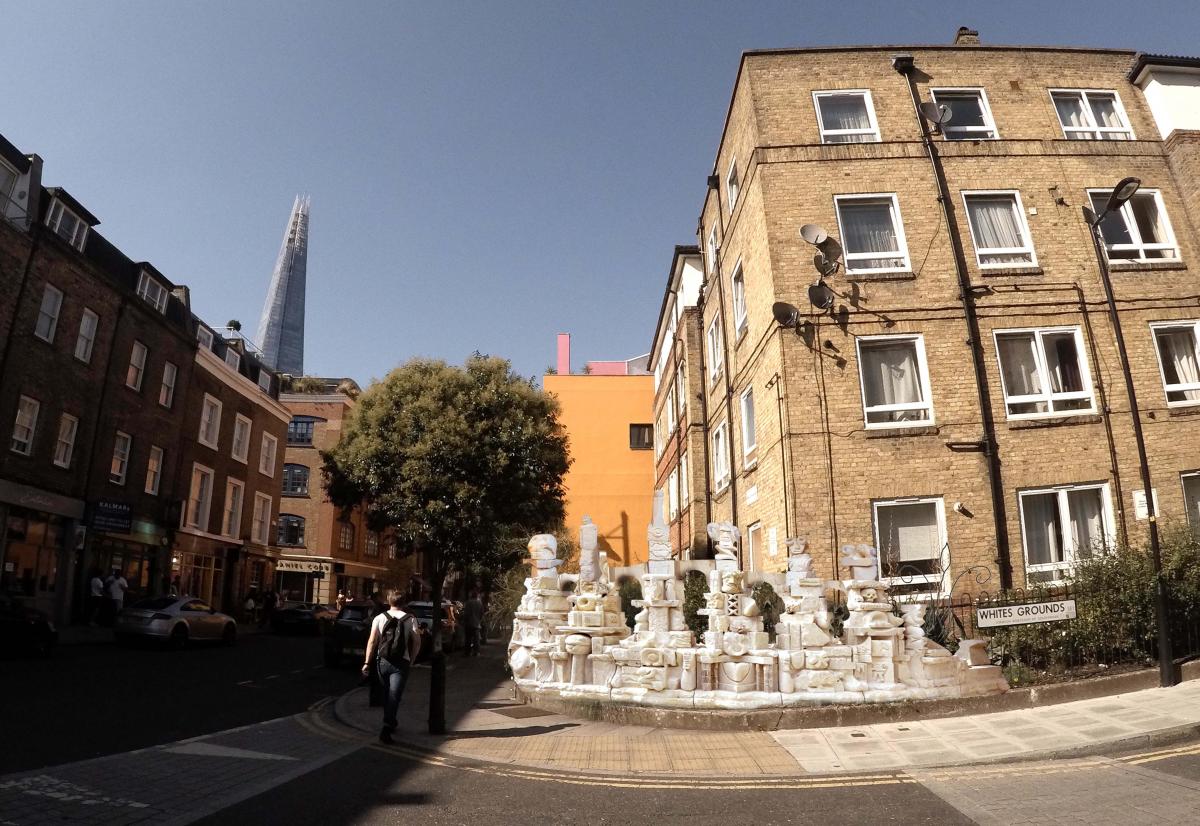