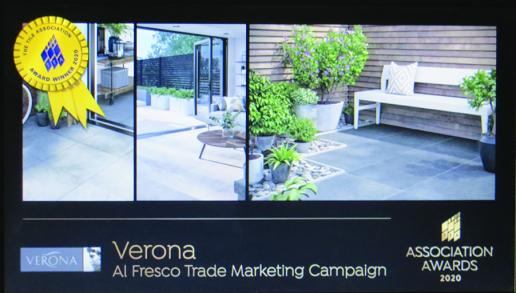 This was the scene at the Tile Awards last month. The Stone Federation Natural Stone Awards, which were to have been presented on 4 December, are also going online and will be presented in March.

The Stone Federation Natural Stone Awards that were due to be presented next month in London will, in the face of Covid-19 restrictions, be presented online in the Spring instead.

There will, however, be a shortlist of potential winners published on 4 December (when the Awards were to have been presented) which Natural Stone Specialist will bring you in the next issue.

Stone Federation was hoping to make these Awards particularly special as they would have been the 20th to have been presented in 2020.

A suggestion of how the Stone Awards might look online was given by the Tile Association Tile Awards last month (16 October).

Originally planned to be presented in Birmingham in March, the online event at least meant they were presented this year, if later than expected.

The event was introduced by Paul Luff, the TTA chairman, and compered once again by Kyran Bracken, the World Cup-winning Rugby Union player.

Although undoubtedly different from the normal event, awards were presented in all categories. You can watch the hour-long event or individual awards at bit.ly/TileAwards2020.