Like so many events this year, The Worshipful Company of Masons’ Annual Exhibition at Gallery Different in Fitzrovia, London, has been moved online in the face of Covid-19 restrictions.

It was due to open in conjunction with the Gallery’s Winter Collective from 16 November, but was scuppered by the second lockdown. On the other hand, it was due to end on 21 November but is now going into January.

During the lockdown it was logistically more difficult than usual moving works to the gallery from the artists’ studios, especially with the Congestion Charge in London having been temporarily increased to £15 and extended to operate from 7am until 10pm seven days a week for the duration of the pandemic restrictions.

The Masons’ Annual Exhibition gives emerging artists in stone an opportunity to show their work alongside that of more established artists. The artists decide what price tag should be put on their work and the Gallery adds its usual commission, although it gives it, along with 10% of the commission it takes on the works in the Winter Collective, to the Masons Livery Company Craft Fund charity.

The Craft Fund provides financial assistance for Yeoman Masons who are seeking training, provides funding for apprentices, students and trainees, and awards an annual bursary to attend the City & Guilds of London Art School (or other suitable training centre). 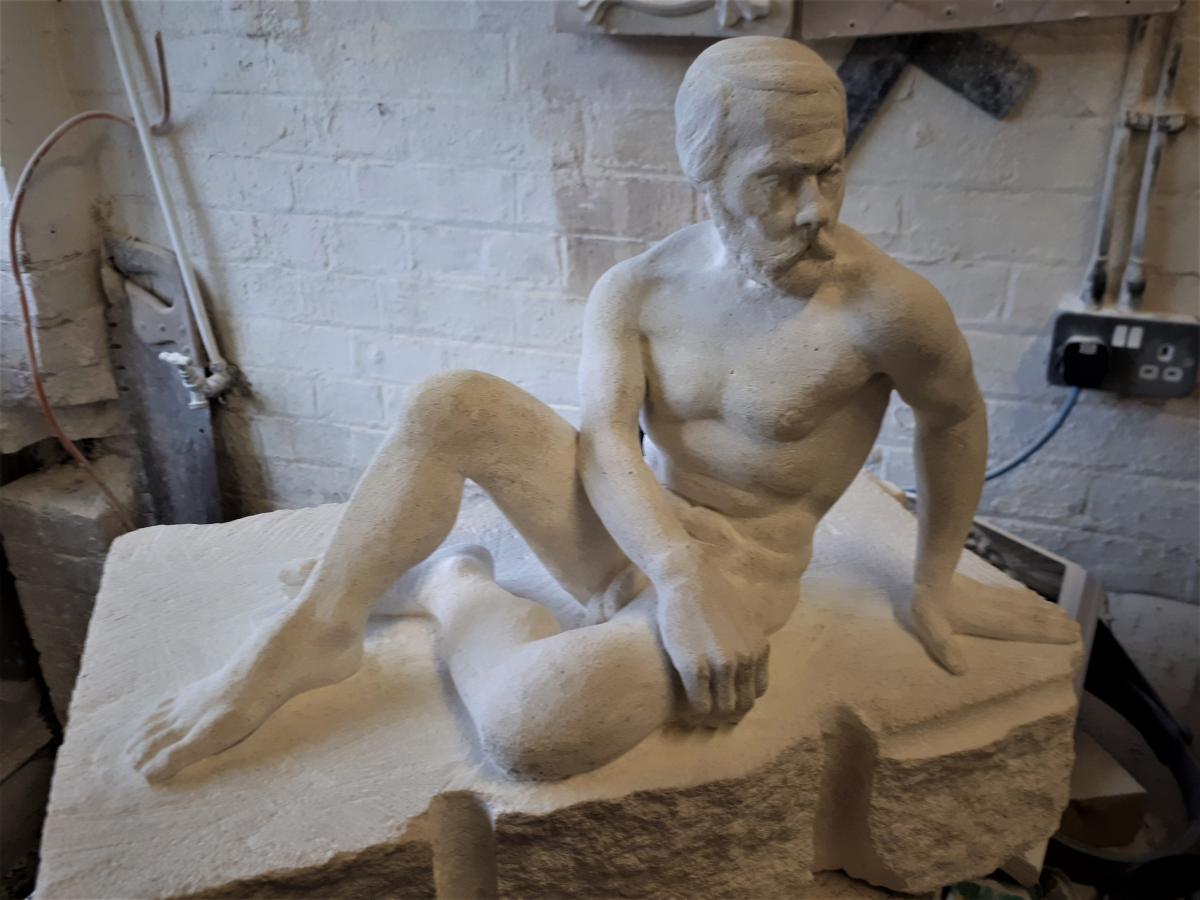 Male Nude 30x40x26cm in Portland limestone by James Kirby, an alumnus of the City & Guilds of London Art School and a long established independent stonemason and carver working in London and the South of England. Price £3,400.

Additionally, it makes an annual grant to the Building Crafts College in London, where stonemasonry is among the skills taught. The money is used to help give students workplace experience and make a study tour in Italy.

The Fund also manages and meets the cost of the Duke of Gloucester Awards, which recognise excellence in stonemasonry.

While the Trustees of the Fund are Liverymen of The Masons Company, the charity is independent of the Company.

Anyone seeking a piece of artwork in stone could find works ranging in price from £100 to £1,500 in the Masons’ Annual Exhibition.

Stonework in the Winter Collective by more established artists, such as Johannes von Stumm, a past President of the Royal Society of Sculptors, Dawn Roland, a Fellow of the Society, and Mel Fraser, a Member of the Society, cost some thousands more. 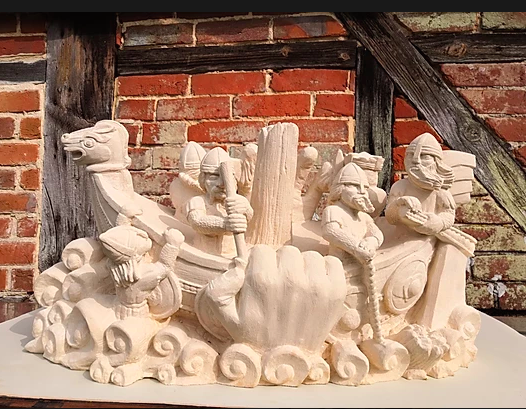 The Masons Company Annual Exhibition this year includes the work of 22 artists. Some have produced several works, some just one piece. A selection of the work is shown here. If you are moved to buy any of them you can do so from Different’s e-commerce website at www.gallerydifferent.co.uk and on the Gallery's 'Artsy' website (click here to visit), where you can see all the exhibits in the Masons’ Annual Exhibition and download the 40-page catalogue that tells you more about the artists. The artworks of the Winter Collective can also be bought there.

The only difficulty is that because the pieces are not actually at Different and the artists’ studios are in various parts of the country, collection or delivery will have to be arranged with the artists.

Lauren Slater, the Gallery Assistant at Different, wrote a blog called ‘Works in Stone’ about the three established artists who work predominantly in stone showing in the Autumn Collective at the Gallery. She gave us her permission to reproduce it here:

Stone has been, for the most part of history, a fundamental material in the creation of art, architecture and society. Examining ancient civilisations such as the Roman Empire, we can see how the incorporation of stone both in architectural sites, and in art, became an exemplification of wealth and status. The fact that such heritage sites still co-exist alongside today’s society in the Italian capital, highlights the strength and endurance of stone as a material. The natural connection that occurs between humans and the earth, through the incorporation of stone, is indicative of its success and part of the reason for its prevalence in artistic practice today. Looking specifically at the works of Dawn Rowland, Mel Fraser, and Johannes von Stumm, I will explore the poignancy of stone as a primary medium for these three artists. 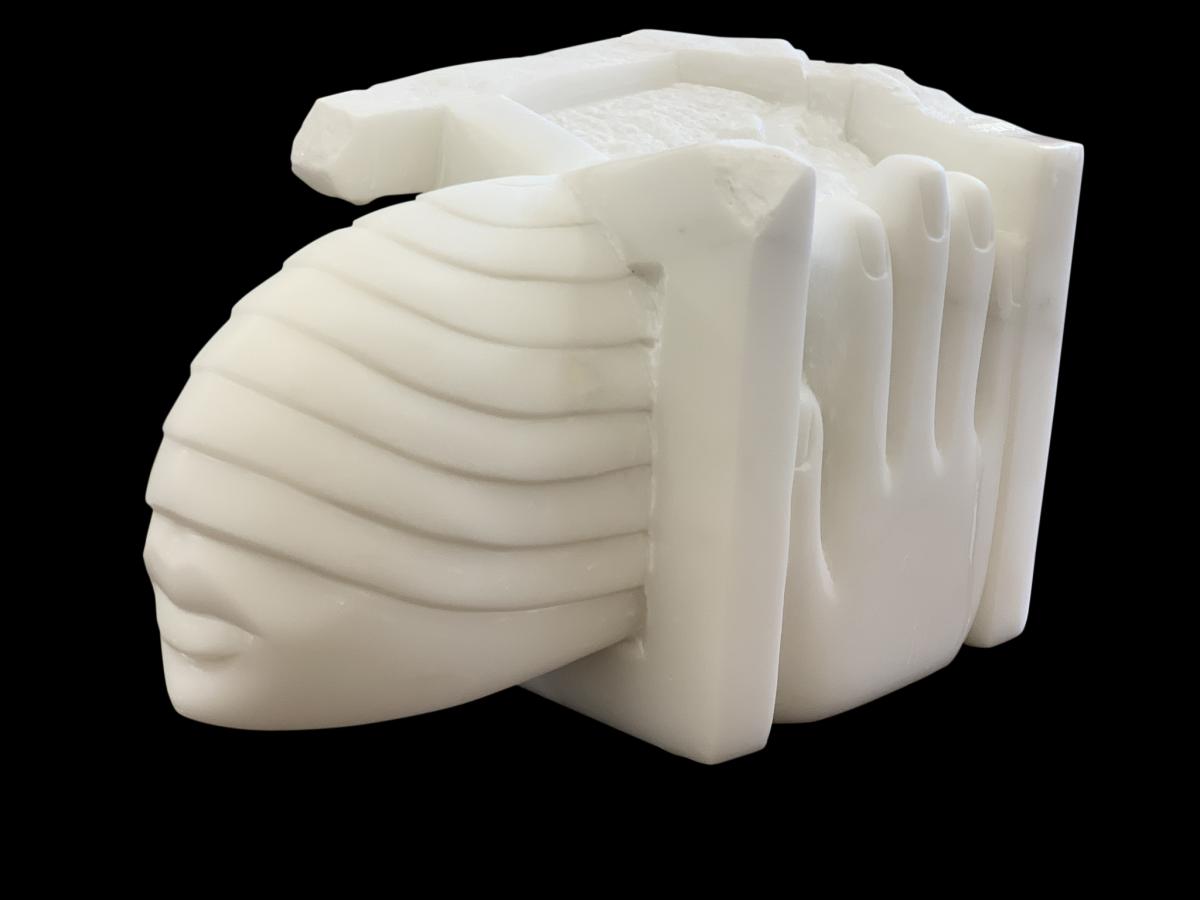 Dawn Rowland (FRSS) is a sculptor whose emotionally charged works offer an insight into the profundity of stone as a material. Rowland’s sculptures are demonstrable of her unquestioning carving skills, with the perfect proportioning giving her work refined edges and with this a sense of authority. Rowland’s use of granite in her two Boxed In sculptures gives a richness and depth to the works. As suggested by the title, the subject is boxed in between four walls with little space for movement. The density of the granite that encompasses the head gives a greater sense of oppressiveness, where one is physically able to imagine the weight being forced down upon their own head. The incorporation of a blindfold, which covers over half of the face, again adds to the severity of the box. The lack of sight could suggest fears of loneliness and desolation, playing into the subconscious fears of the viewer. The carved lines in the blindfold represent the creases and crevices exposed when blindfolds are taut across their wearers’ face, again signifying a sense of forcefulness and overbearing. Such realistic sculptural features depicted by Rowland, allow for a greater connection to be made between viewer and sculpture.  Measuring 61 x 61 x 40 cm, Boxed In is commanding in its stature, preventing the onlooker from being able to ignore its presence. Such power commanded by the sculpture in both interior and exterior settings, is in direct juxtaposition of the message being revealed. Rowland talks to our conscience reminding us that, particularly in a time such as the present, we must engage with those around us. The same four walls are becoming an alarmingly overbearing factor in the lives of others.

Although smaller in scale (46 x 46 x 32 cm), Dawn Rowland’s Boxed In made with white granite evokes the same emotions from its beholder. The choice of the granite gives a complete sense of inescapability and alienation, driving the viewer to assess their own wellbeing and internal emotions. Rowland continues to explore the human psyche with her work Breaking Out (pictured above). Unlike its Boxed In counterparts, Breaking Out (20.5 x 32 x 15 cm) is liberating, free from the constraints of its initial restrictions. The elongation of the head displays a sense of force and overcoming of challenge, with the lowered blindfold further strengthening the pull away from confines. Rowland often depicts hands in her work and the hands here carved on the side of the subject’s face are illustrative of strength, power and a re-emergence into the world. 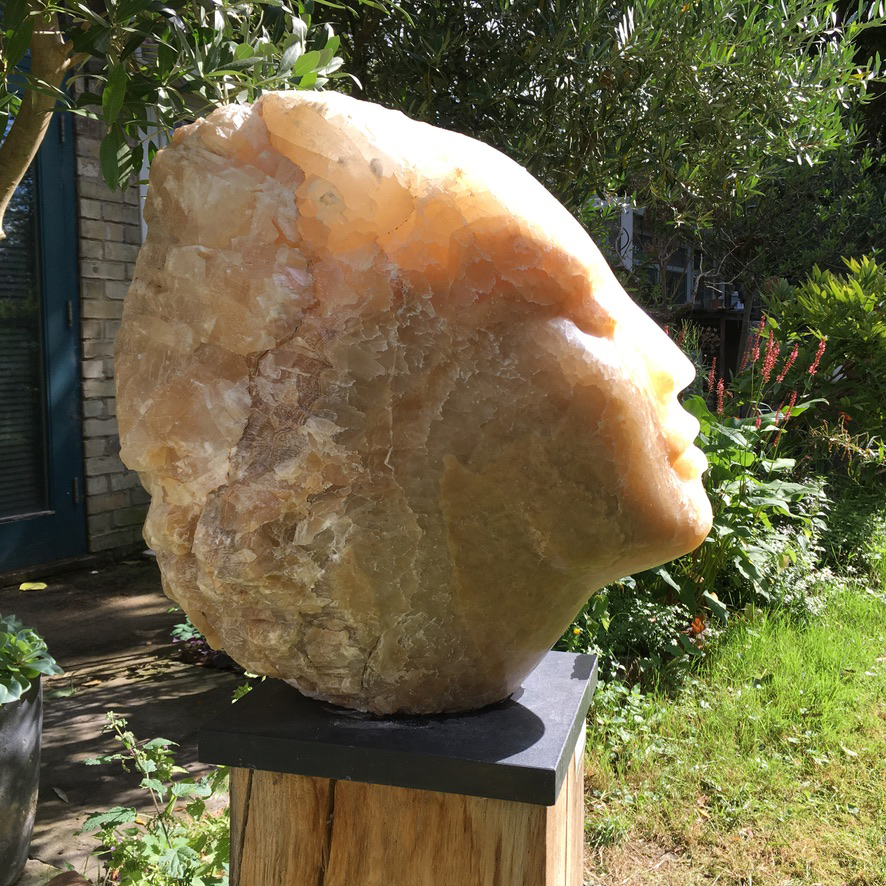 Mel Fraser’s portfolio, comprised both of abstract and figurative works, although the figurative works have deeper symbolic meaning. Fraser’s absolute proficiency in carving in alabaster is proven by the challenges she overcomes. Angel Wing XX, is a prime example of this where the top curves of the sculpture have been carved to such an extent, one can see through it. This technique is laden with risk and the high possibility that the alabaster may crack, leaving the work shattered. Fraser’s Eternity III represents the symbol of infinity, in which layers of the circle meet in the middle, overlapping as they go. The historical significance of the infinity symbol from which the idea of eternity is derived, depicts a serpent biting its own tail. In this way it signifies infinite immortality, continuity, self-fertilization and eternal return. Since then, eternity has become an idea fostered by humans in their seeking of familial and romantic relationships. The choice of white alabaster, where white represents purity, again references the pure and eternal bonds we long to pursue with other humans. The smooth curved surfaces suggest consistency and reliability, relating to what we seek from the eternal and our relationships.

Mel Fraser’s Gaia (pictured), originating from Greek mythology (being a personification of Earth and a Greek deity, the ancestral mother of all life) introduces the role of stone within sculpture as a physical link between the natural world and humanity. By using the natural alabaster, Fraser immediately connects the viewer back to their ancestral past in which stone is both a source of power and creation. Fraser’s choice to sharpen and then smooth the features of Gaia, while leaving the back rough and jagged is suggestive of an emergence from the earth beneath her. The coarse stone surrounding her face likens the original state of the stone before being carved and sanded. Her face, with pouted lips and closed eyes, is serene in its depiction, with the tilted head emitting an air of authority and matriarchal status. As the viewer, we feel enticed by Gaia, eager to explore her profound beauty, much as we continue endeavouring so to do in our world. Both the universality of stone and Fraser’s depiction of Gaia remain consistent worldwide, provoking appreciative sentiments from all it encounters. 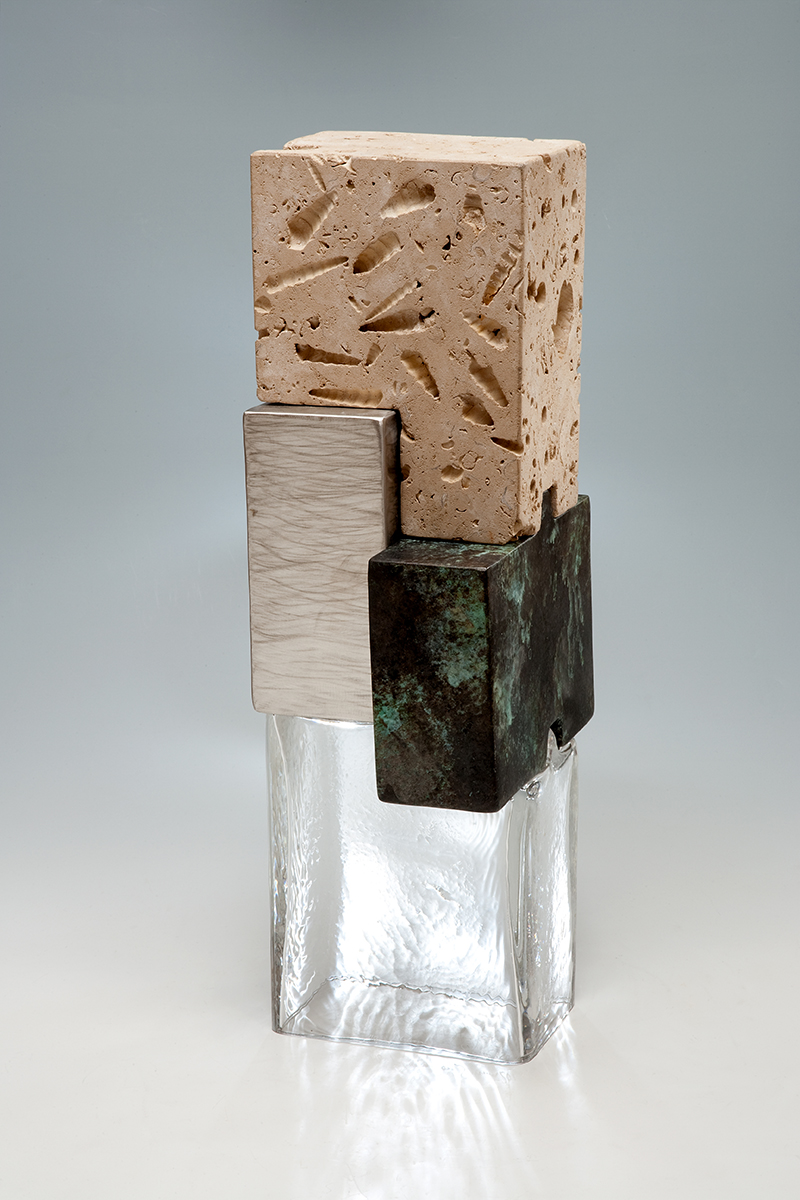 Past President of the Royal Society of Sculptors and founder of the Sculpture Network (Europe), Johannes von Stumm is an acclaimed international sculptor whose work challenges and seems to defy laws of physics with the complex arrangement of his materials joining in harmony. Demonstrable of this is von Stumm’s Four Rectangles, which pieces together Bronze, glass, stainless steel and stone. At the base of the small totem lays hand-blown glass with, placed upon it in a puzzle-like manner, steel and bronze. Above them, fusing together the already challenging amalgamation of materials, is the Portland limestone. This work feels symptomatic of Johannes von Stumm’s life where both glass and steel have deep roots within his ancestral history. The uniting of glass and steel are a direct depiction of the familial ties born from the relationship between his mother and father, with the steel from the blacksmith and steel factory lineage of his father’s side, and his mother’s ancestors owning a glass factory in Bohemia. While introducing this very personal, and deep-rooted connection, von Stumm adds two more conflicting elements; bronze and stone. It is these two materials that are characteristic of the challenges von Stumm faced in his early career, being initially dissuaded from following an artistic path by one of his tutors to go on to follow these exact intuitions - and not only making a living from it, but achieving critical acclaim and global success.

At that moment of enlightenment that led Johannes von Stumm’s desire to work with these juxtaposing materials to create a whole, he was told such combinations were impossible. However, through considerable determination, von Stumm has now created many sculptures that integrate the variety of materials, as Four Rectangles has done, proving such challenges can be overcome. The bronze references the strength and endurance one must practice for success, while the stone epitomises endurance and solidity. The natural phenomenon of stone, being a close tie to the natural world for humans, shows this innate appreciation for the natural world, and our ultimate reliance upon it. Such a simple yet complex combination of materials fosters an awakening within its onlooker, encouraging them to challenge and reassert themselves, even when faced with discouragement.

The works of these three artists demonstrates the central and spiritual role that stone plays in sculpture, teaching viewers to appreciate the natural beauty that lays before them. The continuous use of stone throughout history to the present day demonstrates its beguiling power over humans. And the versatility of stone means there is always more to explore.