Mankind has been creating mosaics for at least 4,000 years – and continues to do so, as you will be able to see in the Mosaic Showcase at the Hard Surfaces exhibition co-locating at ExCeL in London with the Natural Stone Show from 30 April to 2 May.

Get your free ticket to Hard Surfaces here...

The Showcase is presented under the auspices of the British Association for Modern Mosaics (BAMM), which celebrates its 20th anniversary this year as it continues to encourage an interest in all aspects of modern mosaics.

On display will be the work of artists Tracey Cartledge, Julie Fallon, Norma Vondee, Laura Symes, Cinde Lee, Gary Drostle and Ivan Djidjev, and the artists themselves will be at the show to discuss the inspiration, design and processes involved in combining materials and concepts into finished pieces. 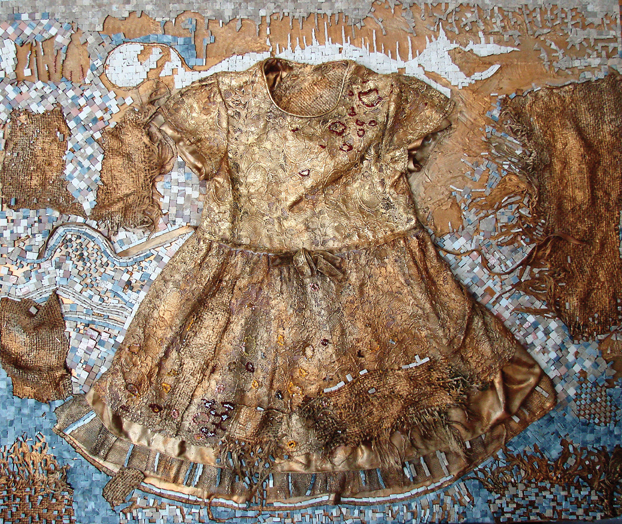 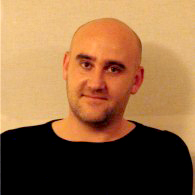 A gifted and versatile contemporary artist born in Sliven, Bulgaria, Ivan is as comfortable with some of the most ancient forms of mosaic art as the most modern, having created traditional Byzantine-style mosaics as well as contemporary pieces. His ecclesiastical work can be seen in private chapels all over the world, even in the Vatican since he gifted one of his mosaics to Pope Benedict XVI.

Now working from his studio in London, Ivan is bringing several of his mosaics to Hard Surfaces, including Angels and Devils, Quintessence and Enlightenment. 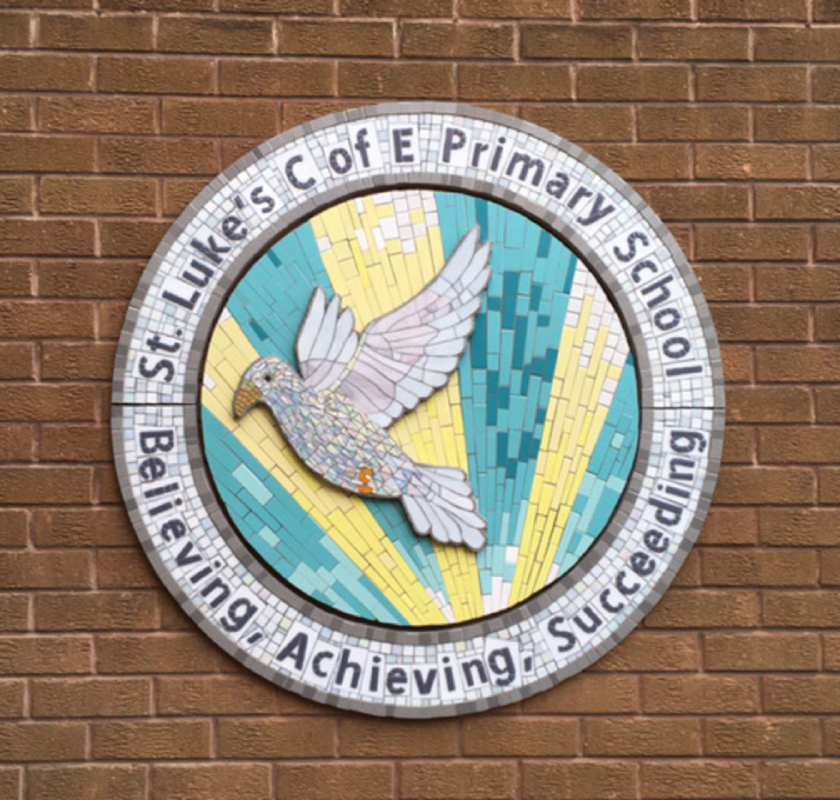 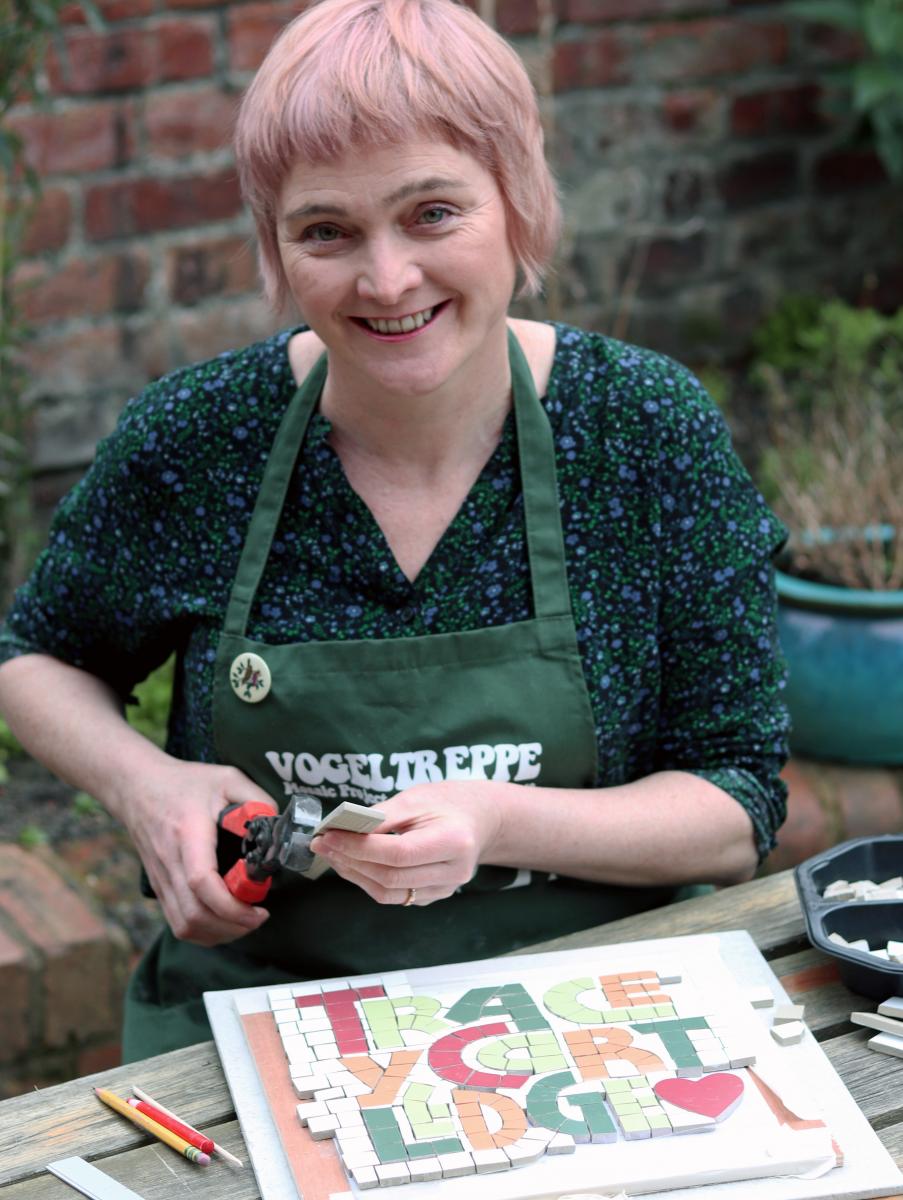 Renown community-based artist Tracey Cartledge strives to improve and enrich the daily lives of people through public art. For every public art commission, she considers the historical and social context that the work will inhabit and how it involves the people whose lives it will impact. Among her works in the Mosaic Showcase are Greek Octopus, The Girl who Fought for Education and The Blues. 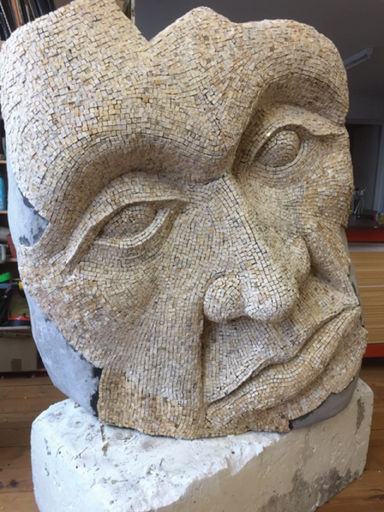 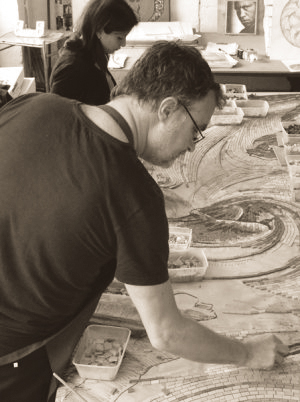 Born in Woolwich in south-east London, Gary Drostle designs, produces and installs large scale mosaics for floors and walls using marble, glass and ceramics. His award-winning work can be seen in town centres, public buildings, hospitals, parks, corporate lobbies and private residencies across the world. His first major mosaic was ‘Sunburst – the light at the end of the tunnel’, commissioned by the London Borough of Islington. It marked a turning point in his career.

Now with more than 30 years’ experience, and a former President of the British Association for Modern Mosaics, Gary is a regular guest lecturer at the Chicago Mosaic School and has given keynote speeches, workshops and juried exhibitions in London, San Francisco, Phoenix, San Diego, Austin, Chicago and Detroit for both the British and American societies for mosaic artists. Gary will be bringing The Solider to the Mosaic Showcase and a video showing his work in situ. 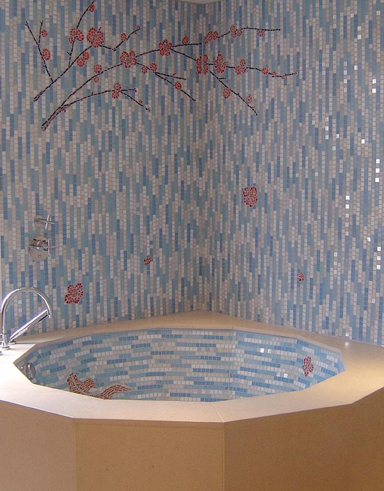 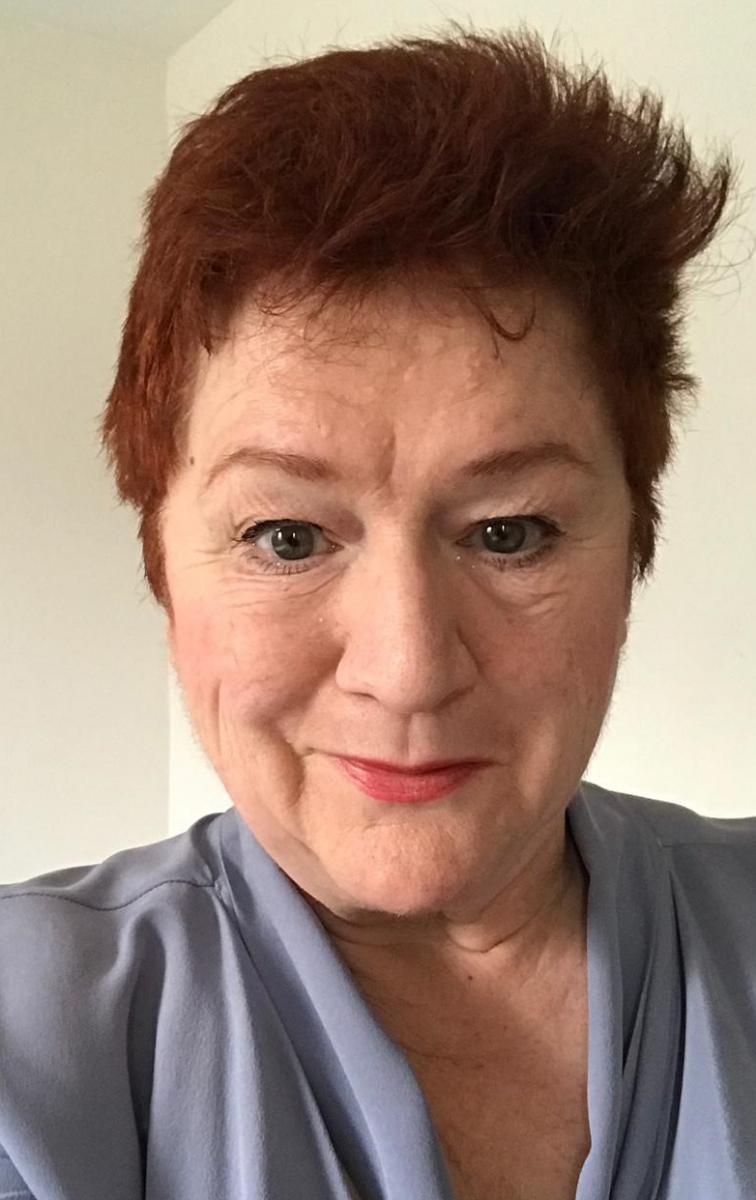 Norma's experience as an art teacher and artist in residence at various schools has no doubt been the basis for the opulent signature style in her work. The recurring themes of the human figure, skyscapes, architecture, technology, water and ancient iconography are the channels through which she aims earnestly to portray aspects of modern life.

A past president of BAMM, with an MA in Art & Architecture, Norma has lectured at cultural events at The British Museum, The Whitechapel Art Gallery and The Tower of London and been involved in creative training work with Disney in London and Paris. She runs her own course – The London Mosaic Weekend – that has extended her influence to many cultural organizations, artists and the general public. Her large works, Diva and The Pillars, will be exhibited in the Mosaic Showcase at Hard Surfaces. 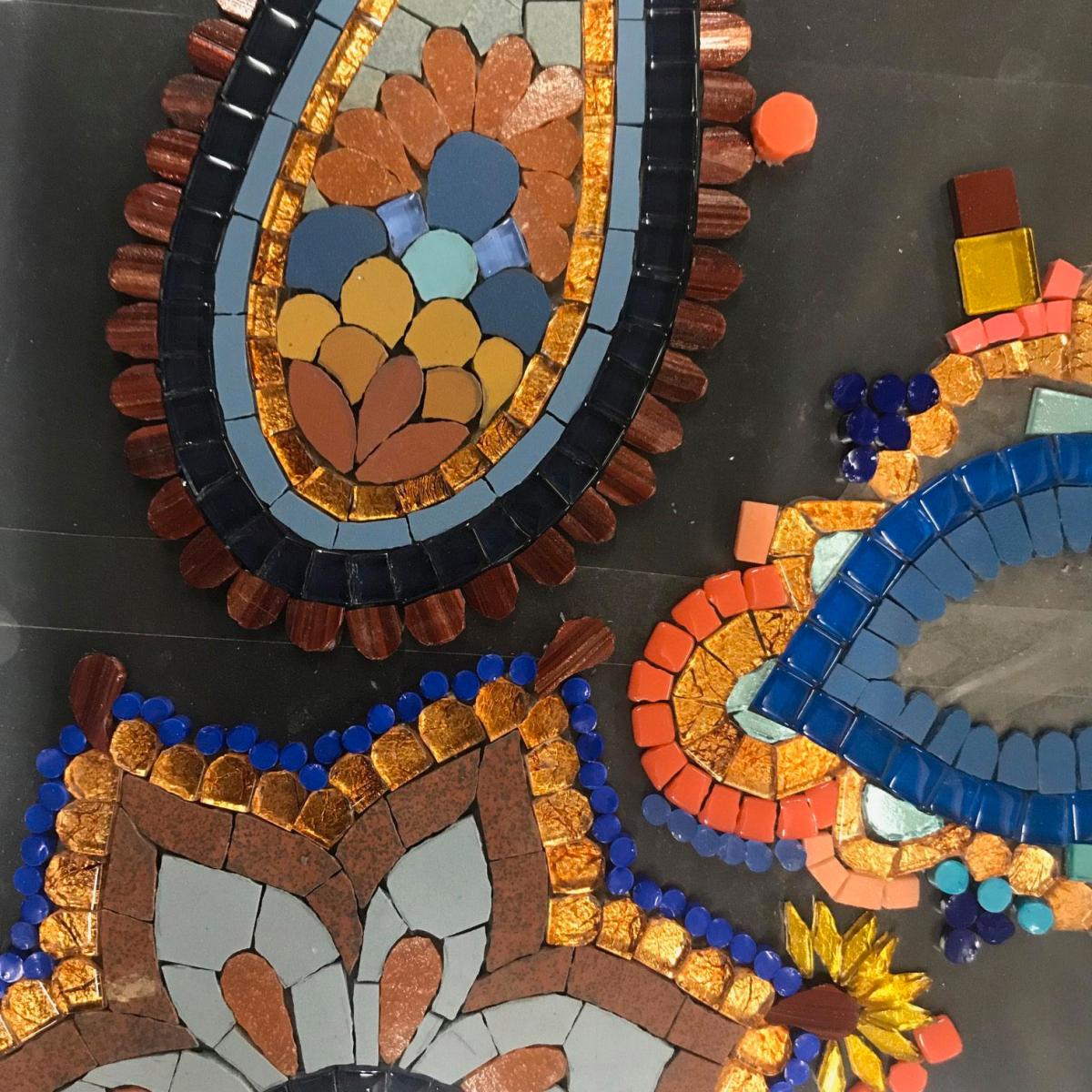 Julie moved from Devon to Belfast in 1986 to study textiles at the University of Ulster, Belfast, and began working on mosaics in 1990 in her backyard. By 1991 she had started Opus Mosaics and took on commissions for interiors and exteriors. While working on site one day she was asked to attempt a restoration, as there was no specialist in Belfast, and was confident enough to repair and restore existing pieces. She has gone on to specialise in restoration and consolidation of historic tiled and mosaic surfaces.

In 25 years' of work she has been involved with nationally and internationally significant listed buildings in Ireland and Scotland and offers a consultancy service surveying and advising on the best options for repair. The Old Map and an Indian commission that Julie is working on will be displayed at Hard Surfaces. 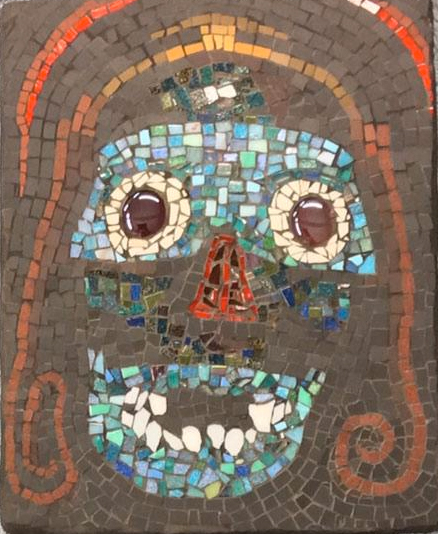 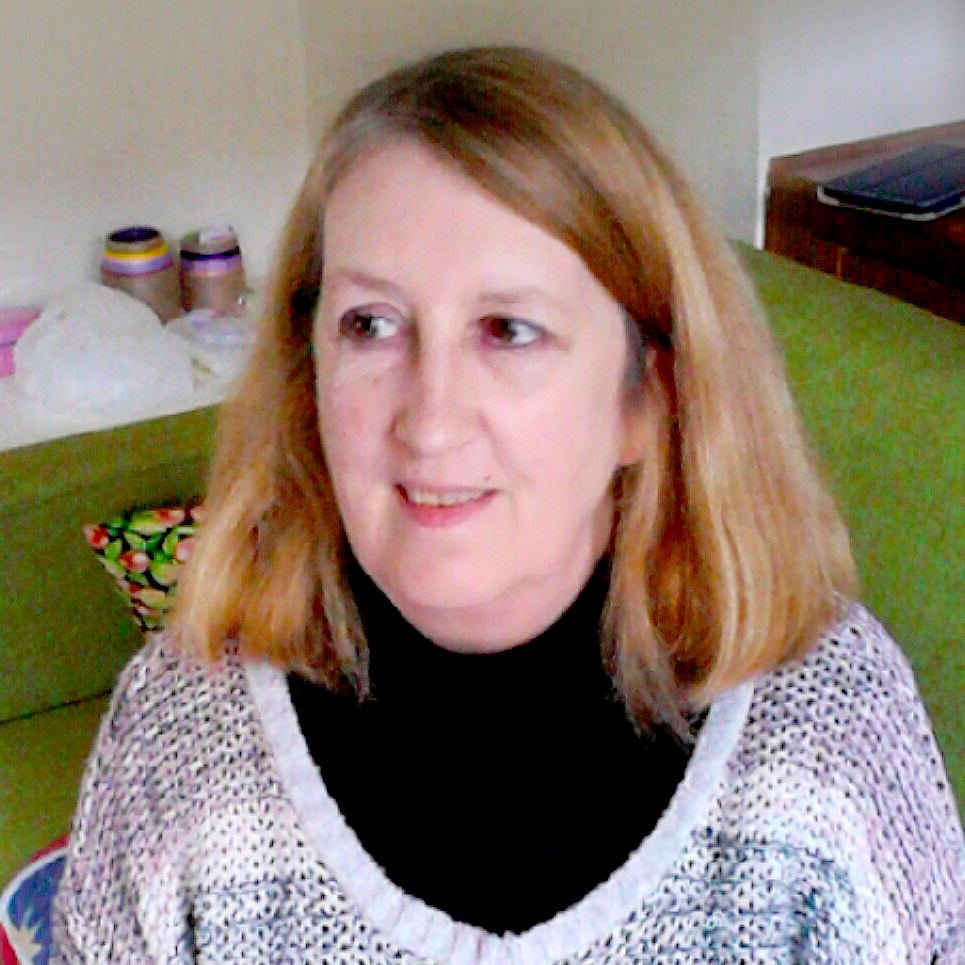 Originally from the Hebridean island of Lewis in the extreme north-west of Scotland, Laura studied history and art at university and travelled at every opportunity, becoming interested in crafts during a time living in South Africa. She was introduced to mosaics while teaching special needs children after returning to the UK. The tactile nature and artistic possibilities of the medium were inspiration to her, as you will see in her Mexican Tryptich in the Mosaic Showcase at Hard Surfaces.

She trained with several well-known and established mosaic professionals and through volunteering at Southbank Mosaics and Art4Space was involved in public realm projects including the Queenhithe Timeline Heritage Mosaic and portraits of notable local women on the outside walls of Morley College in Lambeth. Enjoying a cosmopolitan education with training in fine art in New York, music in London and Milan, and apprenticeships in Ravenna, Spilimbergo, Belgium and the Netherlands, Cinde has a cosmopolitan range of artistic skills and interpretation styles rooted in freedom of expression. Cinde’s art has led increasingly to mosaics. She likes the discipline of the colour restrictions imposed by the materials juxtaposed with the variety of textures available in the tesserae.

While working on commissions that range from pet portraits and monuments to international projects, she teaches mosaic as a part of art therapy for the National Health Service. She presents The Table and The Peacock in the Mosaic Showcase.