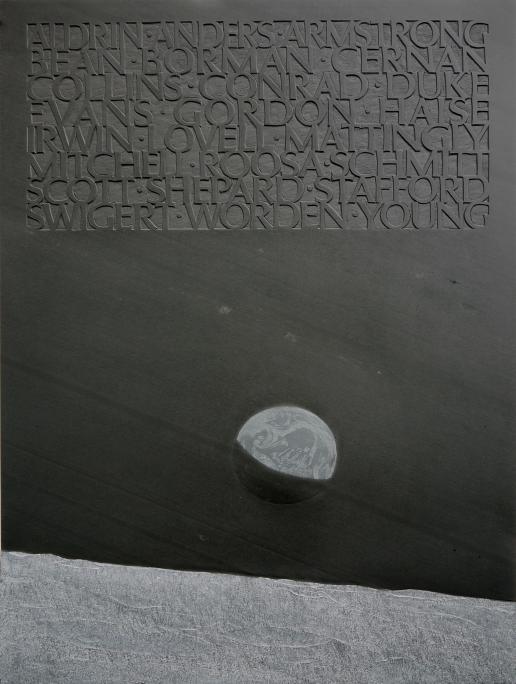 This is called Earthrise. It is the work of Gordon Hayes, one of 23 artists from a new generation of lettercutters whose work is exhibited in the 'New Beginnings' exhibition at the Lettering Arts Trust gallery at Snape Maltings, Suffolk.

A new exhibition of the work of a younger generation of artist lettercutters has opened at the Lettering Arts Trust at Snape Maltings, in Snape, Suffolk. It runs until 8 November, 11am to 5pm daily, including Sundays.

Due to the Covid-19 restrictions the Lettering Arts Trust took the decision to cancel the planned summer exhibition, instead extending the spring show to the end of August when the gallery re-opened after Lockdown. That has presented the opportunity to head into the autumn with the fresh and intriguing work of a new generation of lettercutters.

The exhibition is appropriately called 'New Beginnings'. Entry is free.

Lettercutting is on the Heritage Craft Association’s official red list of endangered crafts, but this show reveals the cohort of new talent that is emerging. Some of the artists have had formal training in fine art, masonry and specialist lettercarving; some have not. There are past apprentices and journeymen trained under the auspices of the Lettering Arts Trust alongside former graduates from City & Guilds and Goldsmiths as well as those who have explored the craft independently. There are most definitely fresh shoots.

‘New Beginnings’ shines a spotlight on this younger generation of lettering artists and lettercarvers who demonstrate not only their skills in the craft of lettercutting, but also reflect contemporary influences on lettering design and material manipulation.

Every craft evolves as the next generation brings contemporary influences to bear on it and the latest evolutionary advances in lettering are a delight to see at 'New Beginnings', demonstrating not only the dexterity of the artists, but fresh ideas for using and forming letters, playing with the surface of the stone they are cut into and engaging with and manipulating the material.

Below. Outside the Box by Zoe Wilson. 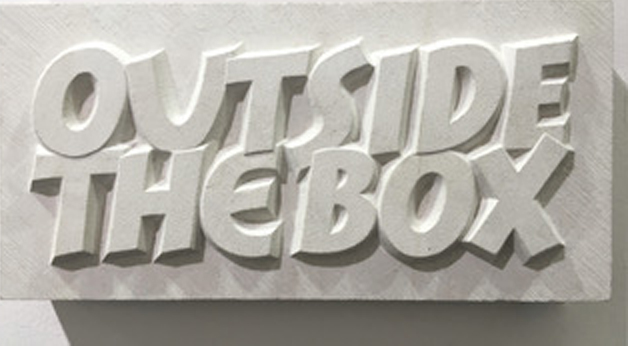 Outstanding. We want to learn more. Thank you
Good to see lettering in stone being encouraged