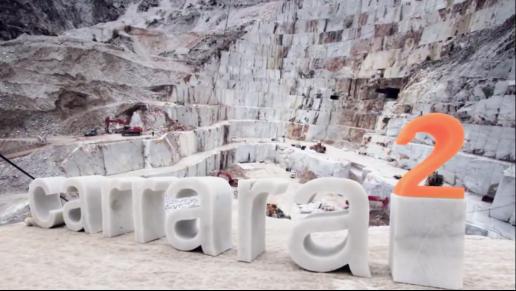 The Marmotec stone exhibition, relaunched as Marmotec_Hub_4.0, in Carrara, Italy, has become part of the Carrara2 'concept event'.

The Italian stone exhibition in Carrara, Italy, which has for many years played second fiddle to the annual exhibition in Verona, has relaunched this year as part of what is being heralded a 'concept event' under the name of Carrara2 from 2 to 9 June. It encompasses the exhibition, now called Marmotec_Hub_4.0, 4-8 June. The show continues to be at the fairground in Marina di Carrara.

Carrara is the marble hub of Italy. The town is a port with the Apuan Alps behind it, from which are extracted the famous Carrara marbles (Calacatta, Statuario). The exhibition there was once one of Italy's two major annual stone shows, but it changed its frequency to every two years many years ago as Verona started to dominate.

The relaunch is intended to give the Carrara event a more modern feel. Carrara2 is intended to convey the message that the event offers exponentially expanding opportunities, while Marmotec_Hub_4.0 ties in with 'Industry 4.0', the fourth industrial revolution of the internet of things, which played such a big part on the machinery company stands at the also rebranded Marmo+Mac in Verona last year.

The Marmotec part of the event will be an exhibition of stone and machinery, concluding with an auction of the blocks of stone exhibited during the show. What is being called 'Downtown' is an associated cultural event bringing stone art and design objects into the historic city with its small streets and open-air-restaurants. Verona has done a similar thing for several years, with stone sculptures and objects appearing in the city in conjunction with the exhibition there.

Carrara is now also offering a two-night, €500 package for visitors to the show, which includes the show entrance fee, visits to quarries and some of the 200-or-so stone processing companies in the area, a technical workshop/presentation of your choice from the programme being run in conjunction with the exhibition, and two nights hotel accommodation.