Child labour is increasing again after 20 years of declining.

According to a new report called Child Labour: Global estimates 2020, trends and the road forward by the International Labour Organisation (ILO) and UNICEF, published on 10 June, child labour has risen to 160million worldwide – an increase of 8.4million children (+5.5%) in the past four years – with millions more at risk due to the impacts of the Covid-19 pandemic.

Ahead of the World Day Against Child Labour on 12 June there was, on 10 June, a high-level online event organised by ILO and UNICEF to discuss the findings in the report. Martyn Coffey, Chief Executive Officer of British hard landscaping company Marshalls, took part in this hard-hitting and powerful conversation. Marshalls buys stone from India and other parts of the world and Martyn was asked by Amar Lal, now a lawyer but, before being rescued, was a child in bonded labour in a sandstone quarry in Rajasthan, how Marshalls could help end child labour.

Martyn, pictured above on the right of Amar Lal during the online event, said Marshalls makes sure there is no child labour among its first and second level suppliers, but said it was not enough for companies to focus on their own supply chains, they had to work towards irradicating child labour in the sectors they work in because it is a sector problem. He said efforts had to be multiplied because decisions taken in the UK had a massive impact on lives elsewhere in the world.

Martyn said beforehand: “There is so much more that business can do to accelerate progress towards the elimination of child labour, and yet still so much ignorance within the private sector about what child labour actually is. It is an absolute misconception that children labour alongside their parents in family businesses, perhaps as you or I did when we were young. Many children in India are born into bonded labour and are enslaved from the day they take their first breath.

“Vulnerable children are actively targeted, snatched, coerced, trafficked across the country, bought and sold and exploited by organised criminal enterprises. Legitimate business can have no part in this and have a responsibility to not only identify the parts of their supply chains where there is a risk of child labour, but to ensure they identify it and that children and their families get the expert support they need.

“In the light of the new global figures on child labour, business leaders must now step up, speak out and act in support of children’s rights. We must all do everything possible within our power to accelerate progress towards the elimination of child labour.”

Below. In the UK, Marshalls' uses its fleet of 350 delivery vehicles to spread the anti-slavery message. 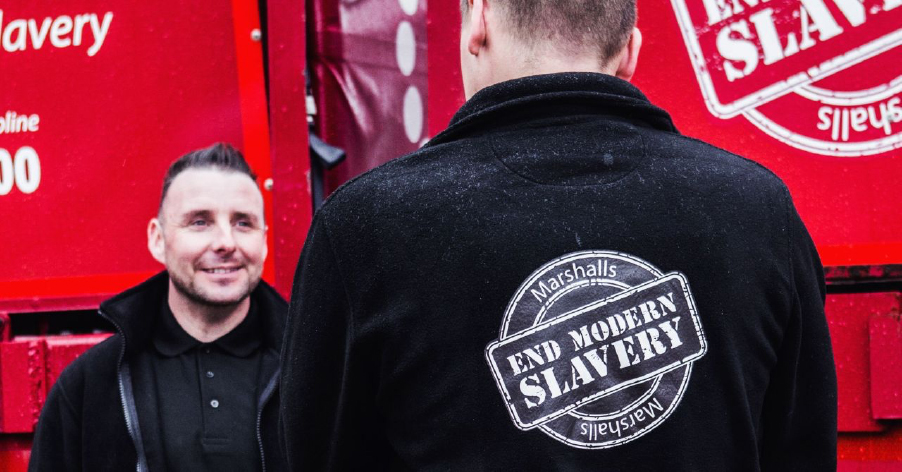