Ian Knapper, a stonemason and stone designer, gives us his opinions of the prospects for the trade.

Stonemasonry has come a long way over the decades, producing stunning engineering feats using advancing technologies while remaining true to its beginnings.

That’s the opinion of Ian Knapper, a stonemason who feels even greater potential is unleashed by modern technology and science.

Testimony to the longevity and appeal of stone are the works of master craftsmen which remain standing around the world today, such as the Taj Mahal in India, the source of the marble for which has lately joined stones such as Portland, Bath and some of the slate from Wales, as well as other stone from around the world, as a ‘Global Heritage Stone Resource’.

And when worked, designed and constructed well, the UK’s indigenous stones can be every bit as stunning as the marble of the Taj Mahal, says Ian.

Ian Knapper Stonemason is a company with a team of stonemasons who have specialised in designing and building beautiful bespoke staircases and fireplaces in stone for more than 25 years.

As Ian Knapper himself says: “Stone is widely regarded as the premier building material due to its character as well as its durability. If you look around the world today, stone creations such as the pyramids in Egypt and Skara Brae in Orkney, which have been standing for about 5,000 years, still leave us in awe. Stone is a tactile and elegant material that still fascinates me, and as a team we have always strived to see how far we can take stone with new and innovative designs.”

With an early career working with The National Trust and English Heritage restoring historic buildings, Ian now enjoys nothing better in his working life than combining the skills of the stonemason with modern technology such as his GMM Egil saw and the Rhino 3D modelling he uses to complement his own creativity of design as he leads a team that produces majestic sweeping staircases, bespoke solid natural stone fireplaces and commissioned works.

“Stone can be a versatile interiors solution that by its nature creates a dramatic natural centrepiece for a space,” enthuses Ian. “The craft of shaping a natural stone to form structures has not changed radically in many years. The same things that were achievable by a hammer and chisel in the 13th and 14th centuries remain achievable today; the same intricate details and architectural design from skilled craftspeople. Modern day advancements, however, are making the production process easier for today’s stonemasons. Rather than taking years – decades even – to complete, technology in the primary cutting and subsequent processing of stone has sliced this to days and weeks, depending of the project, of course.”

One of these modern-day advancements is the introduction of the five-axes CNC saw, revolutionising the cutting and initial shaping of stone. It takes away the huge physical element previously associated with creating a basic shape.

Indeed, says Ian, the most proficient stonemasons can create 80% of a structure or construction using the programming of the robotic capabilities of this machine, although the remaining 20% of refinement he believes must be delivered by skilled craftspeople, because, he is quick to point out, hand-finishing cannot be replaced. “For me, there is no replacing the finish of stone by hand and that is something that will never change in true stonemasonry.”

The expansion of the materials portfolio as stone markets worldwide have opened up allows a widening of customer options.

“Our team is constantly travelling and collaborating with other like-minded businesses to learn as much about the advancements as well as the opportunities within the world of natural stone. Each time we de-brief there is something new to learn or think about.

“In some fields, stone is considered a very traditional material suitable for an historic house littered with coats of arms. It can be, of course, but it can also be used to create the most stunning statement floating stone staircases for the modern home. We are constantly pushing the boundaries in design.

“Technology and choice have meant that we can now construct a solid staircase in Carrara Michelangelo Italian marble, which would have been time and cost prohibitive beforehand.”

Stonemasonry has also seen huge progress in tools alongside the machinery. It has enabled the team at Ian Knapper Stonemason to achieve  precision finishes in double quick time.

Technology has also impacted on the design process. The introduction of computer-aided design (CAD) 30 or so years ago really came to the aid of stonemasons. Rather than having to draw and create full size templates, designers can draw on screen and print out at any scale. Again, Ian believes the technology is best used in conjunction with hand skills. “It is not paperless and I don’t think ever should be due to the hand-finishing. But it is hugely more efficient.

“The same goes for advancements in digital surveying. The ability to extract information about buildings; to understand them and their parts better is making it easier to get the requirements correct and provide real solutions rather than sticking plasters.

“Take the rebuilding of Notre-Dame Cathedral in Paris. The digital surveys will be guiding the stonemasons to recreate the roof spire and vaulted ceilings in their former splendour. This science behind the stone and behind the building is happening all the time, allowing architects and stonemasons to research and comprehend more effectively the material and what is truly required.”

Engineering capabilities are also expanding the possibilities of what can be achieved. Advancements in steel tensioning, for example, have opened new possibilities for stone staircases. Work on a composite of stone and carbon fibre producing strong, ultra-thin elegant structures is also bearing fruit, improving the performance of the material and facilitating its further application.

Then there’s the stone treatments. Chemical companies have added durability to stone, avoiding staining and discolouration and enhancing the finish. Gone are the days of slapping varnish on to repel water and having to have a stippled effect finish to prevent slipping.

The customer is king and wants statement stonemasonry such as cantilevered staircases, says Ian Knapper. “Future advancements and upgrades in robotics and software will only strengthen the potential applications and options.

“The craftsmanship of stonemasonry has evolved to suit our age. Production and design are more technologically advanced and only likely to get even more so. However, the true understanding of stone remains at the core of the craft.

“Yes, we are using more scientifically advanced ways to understand the material and the structures it creates but that, as it continues, can only make for more exciting times ahead as the applications expand and the opportunities for masons increase.”

Below: One of Ian Knapper's stunning staircases. 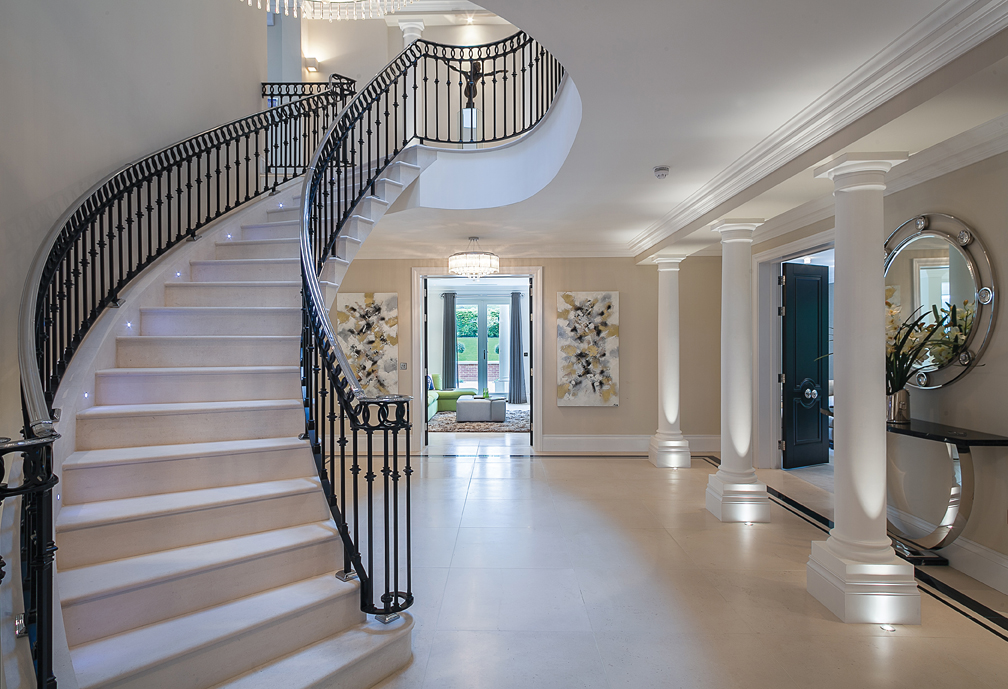