After two years of surveys, consultations, meetings and discussions, the Bath Stone Group has gained planning permission for a new mine entrance at Hartham Park Bath Stone underground quarry in Corsham, Wiltshire.

Lovell Stone Group took over the lease of part of Hartham Park from Hanson Bath & Portland in 2016. It had the only access to the mine from which stone could be hauled. It is a steep incline with stone winched to the surface using trucks on rails. Lovell has supplied the Bath Stone from the mine since taking over the lease.

At the same time Johnston bought Bath Stone Group, with its Stoke Hill Mine in Limpley Stoke, Bath. It has retained the Bath Stone Group name and the Bath & Portland stone hammer logo (read about the purchases here).

Matthew Hawker, Mining Director for Bath Stone Group, told NSS: “We already had an extant permission in place for access into our freehold area of Hartham Park mine but we always felt that a better alternative was available.”

It was the alternative site entrance that the Planning Committee voted 10-1 in favour of last month (May).

The adit (or drift) will start from this new five-acre plot that will also accommodate buildings for sawing the stone, which had caused some controversy among local residents concerned about noise and dust. 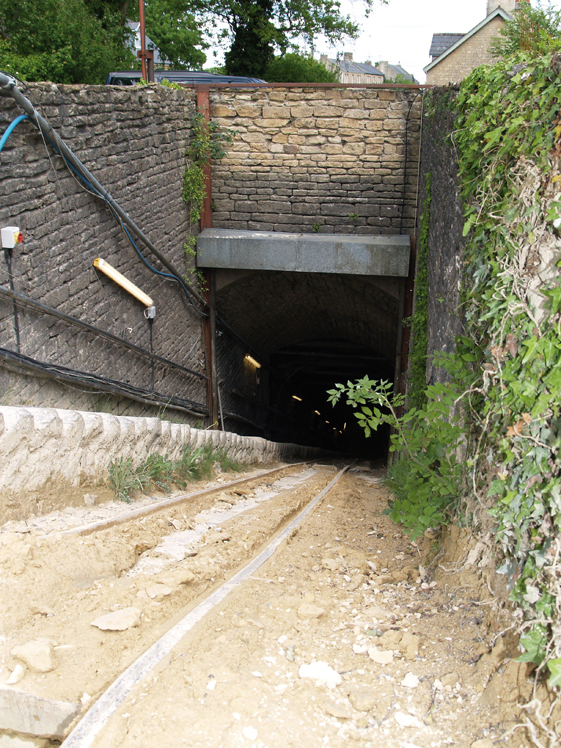 This is the Lovell Stone Group entrance to Hartham Park. Stone is winched up from the mine on a railway cart and people enter the mine down the steps on the left.

Matthew: “The office will showcase the Hartham Park Bath Stone mined as well as the Stoke Ground from Limpley Stoke and the other limestones that the Johnston Quarry Group extract and process.”

Matthew Hawker says Hartham Park has the luxury of space that will allow the site to be carefully planned and developed to produce a pleasant environment in which to work and to visit.

The new 187m tunnel into the mine will intersect (or thirl) into the workings previously mined by Hanson Bath & Portland.

These are currently accessed by two stairwells, which has allowed the Bath Stone Group team to inspect the roadways and faces, including the Box Ground seam that Bath & Portland had been developing.

Matthew: “The decline (or drift) into the Box Ground seam was clearly a huge undertaking. We have mined development roads and drifts at Stoke Hill Mine on five separate occasions, so I fully understand the time, effort and resources that went into this project.” 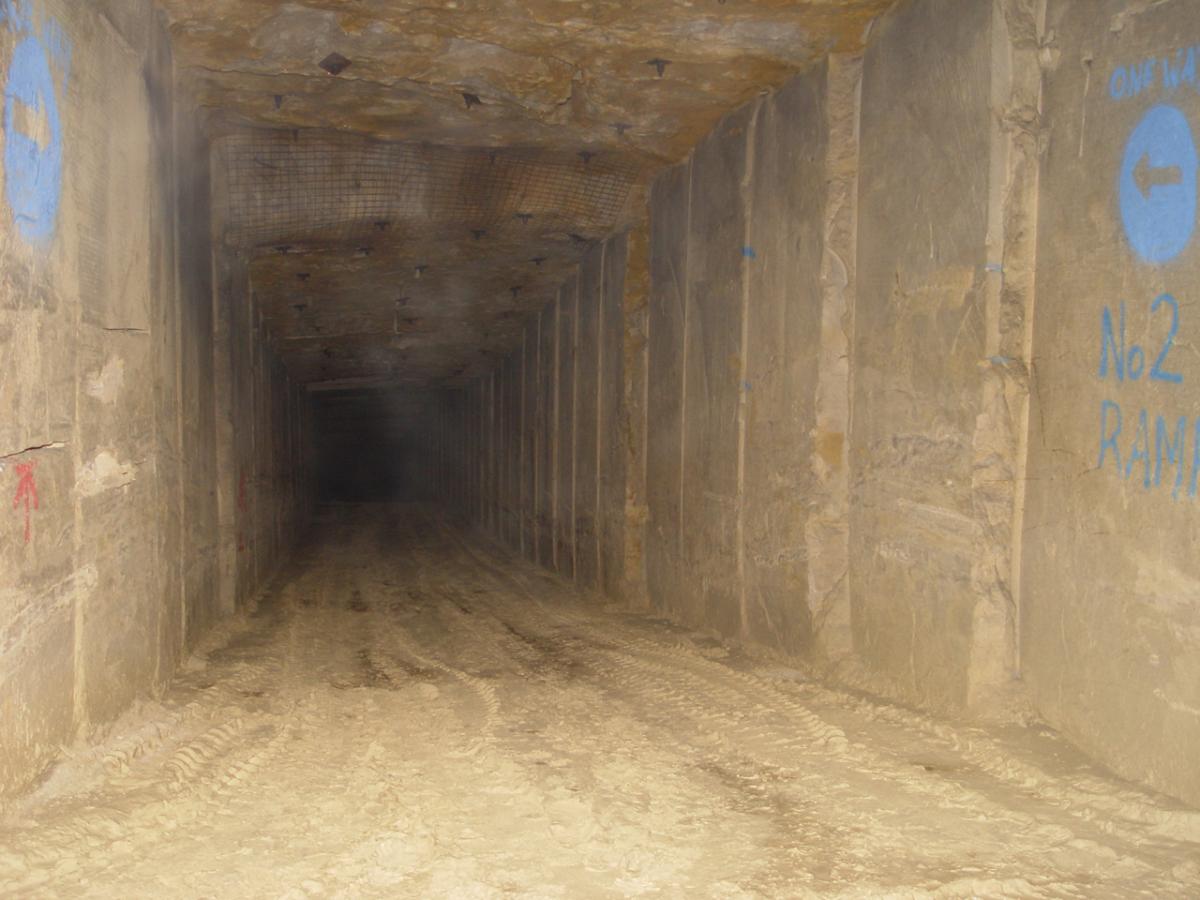 The drift excavated by Bath & Portland into the Box Ground stone beds.

As mining staff are not usually a common constituent of an available local labour pool and the really good ones are hard to find, three extra staff were recruited at Stoke Hill 18 months ago so they could be trained in readiness for opening of Hartham Park.

Matthew: “We have four operatives studying for the level 4 Diploma in Mining Supervision. This will supplement the two that already hold this qualification and allows for strength in depth across the team.”

Nicholas Johnston says that the initial response to the planning permission has been positive. “To be able to offer what clients and architects regard as the best Bath limestones under one umbrella was where we always wanted to be and it seems our customers feel the same.

“Matthew and his team are already in discussion with masonry contractors who wanted to start early conversations about supply from both mines.

“This is the first time in history that Stoke Ground Top Bed and Base Bed are to be offered in a coherent, planned supply and sales environment alongside Hartham and Box Ground Bath Stone.”

Blockstone, meanwhile, is also gearing up for significant expansion of Bath Stone production at its Park Lane mine in Wiltshire, which it purchased from Ham & Doulting Stone Company in 2018.

The plan had always been to buy another Fantini saw and open a new heading. That has now been put into action with the third Fantini having arrived. 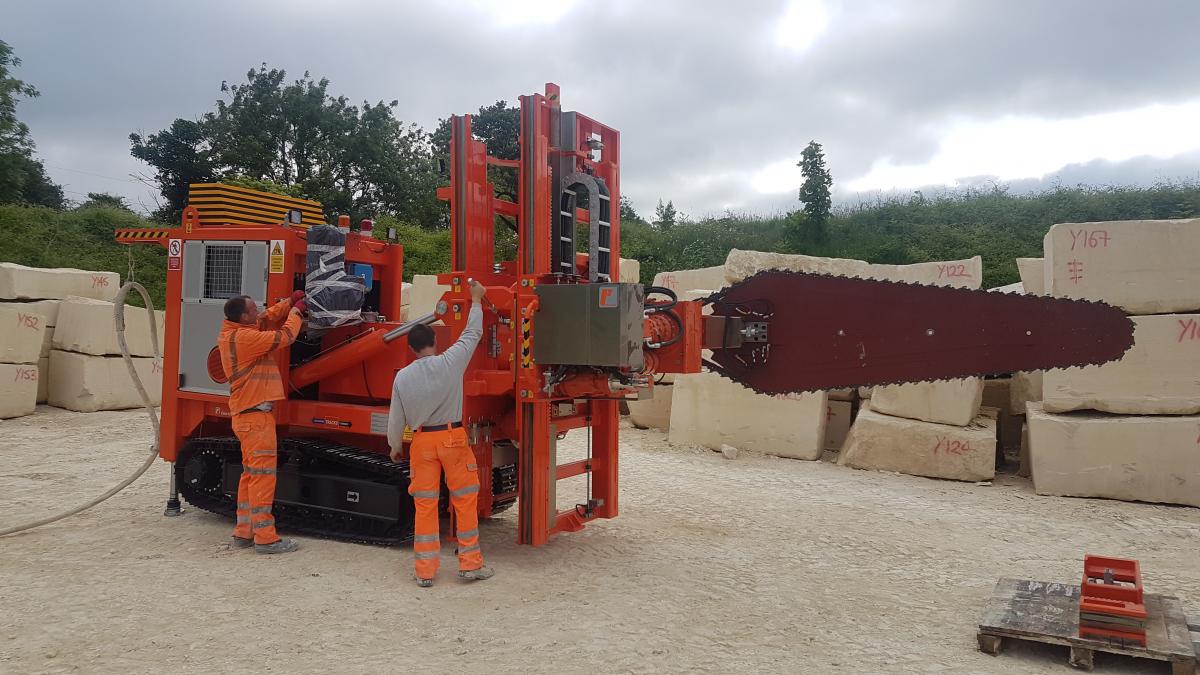 The new Fantini saw that will open a second heading at Park Lane.

Two of the saws are to cut the stone from the headings while the third trims the stone underground.

The new heading will come into production shortly to increase block extraction significantly – as much as trebling output, says Iain Kennedy of Blockstone.

Along with the new saw comes planning approval for the trebling of the size of the block holding / loading area above ground, which Blockstone says will make Park Lane one of the most effective and efficient suppliers of Bath Stone block.

Until Blockstone’s entry to the Bath Stone market, it had been dominated by Hartham Park and Stoke Hill Mine. Park Lane at that time was small scale.

Blockstone is one of the largest dimensional stone quarry operators in the UK, operating nine other sites. And it has the additional clout of being part of the Grants group of companies that includes Grants Precast and Grants of Shoreditch, a major specialist stone contractor.

By its own admission, Blockstone intends to disrupt the old order of things and drive through efficiencies that  will bring down the price of the blocks it sells. And it only supplies blocks. It leaves it to others to saw and process them.

But there are now three major operators in the market. Whether that market can grow sufficiently to accommodate the extra capacity remains to be seen.

Lovell Stone told NSS it had no comment to add about the Bath Stone developments.

Blockstone says it has no intention of conceding any ground.

The Grants Group CEO, Lee O’Connor, says: “At the end of the day having a particular named mine will not be sufficient to gain the upper hand in a toughening market and price will ultimately be the deciding factor. This is why Park Lane is driving through efficiencies to drive down prices for clients.

“When you start from where Park Lane started there is only one way to move and that is upwards. We have seen progressive growth in our client base and, of course, sales. And having so far only scratched the surface of where we intend to go with this then over the next few years there will, without doubt, be significant changes to the landscape of the Bath Stone market.”