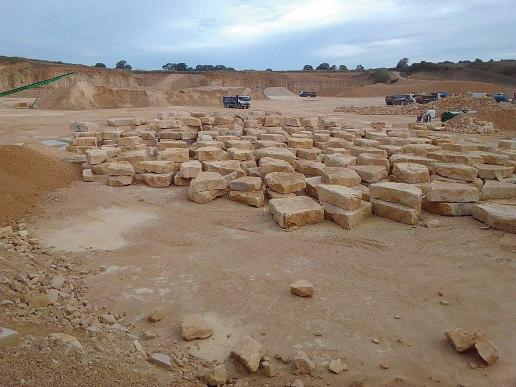 Blocks of Clipsham stone are now available from Stamford Stone from a 41-acre extension to Bidwells Quarry.

Stamford Stone Director Dan Wilson says: “It has taken us several years since we acquired the quarry in 2018 to process the quarrying applications, which had been ongoing for three or four years with the previous owner.”

But the process is now successfully concluded and Stamford Stone has blocks of the stone from the quarry available again.

“We’ve already removed the overburden at the site and are now beginning to excavate some exceptional masonry stone,” says Dan. “We received the go-ahead to create a 41-acre extension to the quarry, which will access reserves of 500,000 tonnes of masonry block stone, which we will extract over the next 12 years.”

He says the beds of Clipsham stone in Bidwells are much tighter than the company was used to in its Medwells quarry, which is not far from Bidwells. It has enabled Stamford Stone to invest in a Fantini chain saw to extract the stone and to stop using explosives, which have been used in the past.

Dan says that has not only increased the production capacity, it also means the blocks being produced are a more regular rectangular shape, which significantly reduces the waste leaving the quarry. That is more environmentally friendly and a bonus for companies sawing it.

Squared blocks of 3-8 tonnes with bed heights of up to 800mm are now available.

Premium masonry blocks of Clipsham Stone continue to be available from Stamford Stone’s Medwell Quarry in sizes of up to 10 tonnes and bed heights up to a metre.

Clipsham limestone from both the Stamford Stone-owned quarries, Medwell and Bidwells, is also available as scants and sawn six sides. Recent test results are available on request for stone from both quarries.

Dan says: “We’ve had enquiries for our block stone from Clipsham Bidwells Quarry since we took owner-ship three years ago. We appreciate everyone’s patience while we negotiated all the necessary permis-sions. We’re delighted to now be at the stage of being able to offer our Clipsham block stone for many years to come.”