From block to finished project: Proud to be Traditional

Dale Maxim and Danny Rushman say they have no ambition to be the largest stone company in the South East. But their business, Traditional Stone, has grown seven-fold since 2014. Here they explain how. Traditional Stone’s yard and offices are on a farm on the border of Sussex and Surrey. It gives the company plenty of space, although you have to cross a cow track to visit. That means manually opening and closing two gates – and there’s a £500 penalty imposed by the farmer if the gates are not closed again (or, from the cow’s point of view, opened again). It’s a little bucolic and quirky – and that is just fine as far as Dale Maxim and Danny Rushman are concerned. They trade under the name of Traditional Stone and ‘traditional’ is precisely how these co-owners see their stone business.

They like to use the stones that have given the churches and homes of Sussex and Surrey their distinctive character for centuries. They even produce the stones from two of their own quarries, although they are just as comfortable using stone from other quarries.

What they don’t get involved with is worktops. They figure they can leave those to others who don’t have the traditional stonemasonry and building skills that Dale and Danny excel in.

Traditional, certainly. And proudly so. Old fashioned? Not so much, although they like to think they have an old fashion attitude towards customers, giving them the time and the respect to deliver their projects on schedule and to the highest quality.

Both Dale and Danny were traditionally-taught masons and both worked for many years with Cathedral Works Organisation (CWO) in Chichester, which went into Administration in 2014.

Danny spent 25 years at CWO and was still there when the company went into Administration. He stayed with the business as it was rescued but left to join Dale shortly afterwards.

By then, Dale had already established his own company as Traditional Stone Ltd on Pallinghurst Farm. It concentrated on the supply of stonemasonry to other companies, one of which had been CWO, in various stones, including two from its own quarries. 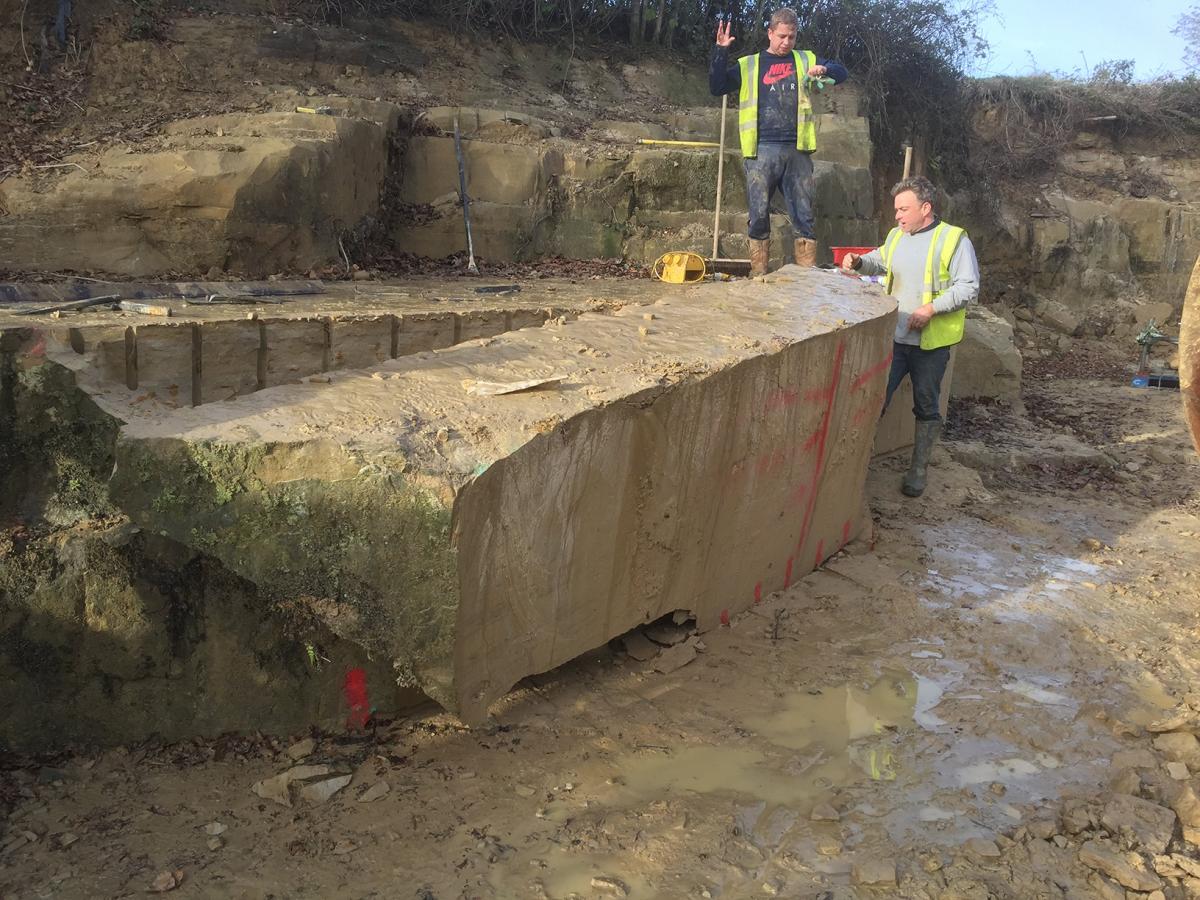 Traditional Stone extracts Sussex sandstone from two quarries. It has developed a grout that it has manufactured for it in China to split the blocks from faces. The grout has proved so effective it is even being sold to big Northern sandstone producers.

By 2014 Danny was Special Works Manager at CWO, dealing with new build and restoration projects that could be up to a value of £1million. But he had always wanted to run his own company and the disruption at CWO gave him the incentive to pursue that ambition.

He approached Dale with the proposition that Traditional Stone could expand its business from supply-only to supply and fix, with Danny running the sites.

Danny: “I had used Dale as a supply only contractor for many years and I could see there was an opening for a restoration and new build contractor in the South East. I’m a stonemason with experience in estimating and pre-contract management. I had good contacts with local architects and clients and Dale and I could see the benefit of bringing those skills to Traditional Stone.”

The disappearance of the name of CWO helped make that viable because CWO had such a highly regarded reputation in the region it was able to cherry-pick projects, making life difficult for competitors. The removal of the name left an opening.

Dale runs the product side and Danny the sites. Dale says: “Me and Danny, we’re very, very hands on, maybe sometimes too much now the company has grown so much. We rely on each other.” Traditional Stone has grown continually since 2014 when Danny joined. Before then it employed five or six people. Now it regularly has 30 people working on its projects. There are 15 in the yard and 10 in the offices, including the sons of both Dale and Danny, respectively Luke and Jamie, who have both successfully completed their apprenticeships during the Covid pandemic. Apart from project managers, the others working for the company are labour-only sub-contractors, providing the varying requirements for the sites. Last summer, the number employed rose to 45 and Dale and Danny believe the pandemic restrictions actually helped them. They admit the initial lockdown was a shock and with everything on hold they did wonder if they would be able to survive. But Danny had been so busy on the estimating side before the lockdown that once it became clear the government wanted construction work to continue, there were projects to be getting on with, such as Dorset’s 11th Century Christchurch Priory, where the work, in Caen stone, included the replacement of parts of the pierced parapet and other stonework, repointing, a conservation clean using Restorative Techniques’ Thermatec superheated water system, and replacing six of the nine grotesques.

The new grotesques were designed by sculptor Rory Young. He carved some of them and some were carved by Traditional Stone’s carvers. One of them was the nurse wearing a mask pictured at the top of this page and below on the repaired and largely replaced parapet of the priory following its renovation. Canon Charles Stewart, head of the parish, told the BBC when it reported the story on its regional news programme that he wanted the new grotesques to be a reflection of “the time we’ve been in”.

Working on ecclesiastical buildings last year was made easier by the pandemic because the buildings were closed. Normally, Traditional Stone has to work around congregations, services and the work of the clergy. Last year, such considerations were generally not required because the churches were shut.

Also, many of the churches suddenly had access to additional grants as a result of the pandemic, and the extra funding meant the projects Traditional Stone was working on expanded.

And because Traditional Stone is in a wealthy part of the country, there were also private newbuilds and extensions to be carried out, often with ever-popular cantilevered stone staircases. 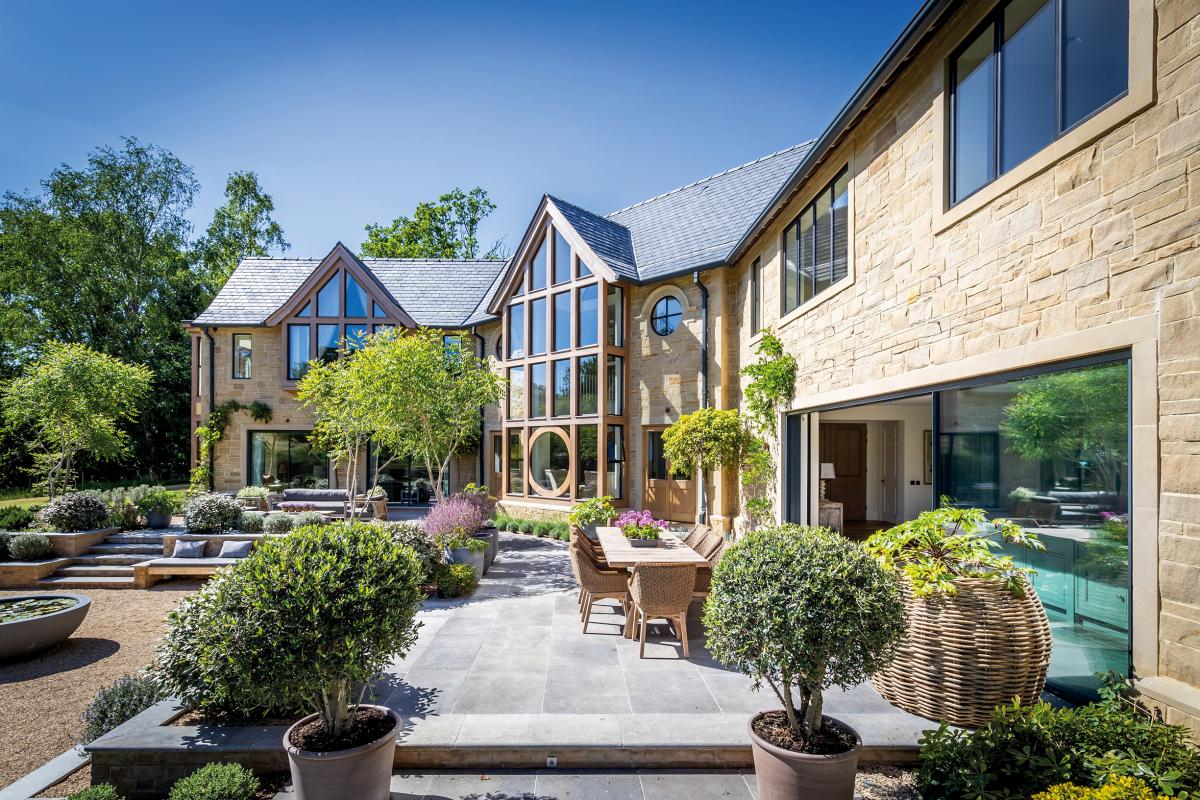 In wealthy Surrey and Sussex private domestic newbuilds and extensions are bread and butter for Traditional Stone. They often incorporate the Fittleworth and Wealden sandstones that Traditional Stone quarries, sometimes in conjunction with other stones, such as Yorkstone. Cantilevered stone staircases remain popular and are often incorporated into the domestic newbuilds and extensions that Traditional Stone has been building since Danny Rushman became co-owner of the company with Dale Maxim in 2014.

Of course, the return to work meant rearranging the working environment so people could socially distance, with no more than three allowed in the canteen at a time, for example, and masks obligatory – although masks are always obligatory when they are working their sandstones, of course.

Some of the office staff could work at home, and to make that easier the company installed a new fibre broadband internet-based telephone system – although Danny says because the site is fairly remote “I had to fight tooth and nail to get it installed”. It was brought in on telegraph poles used to install the computer system some years ago. All the phones are now mobiles connected by an app so the directors and staff can work anywhere.

The quarries the company operates often supply the stones for newbuilds and extensions, although sometimes they are used in conjunction with other stones for vulnerable quoins and cills. 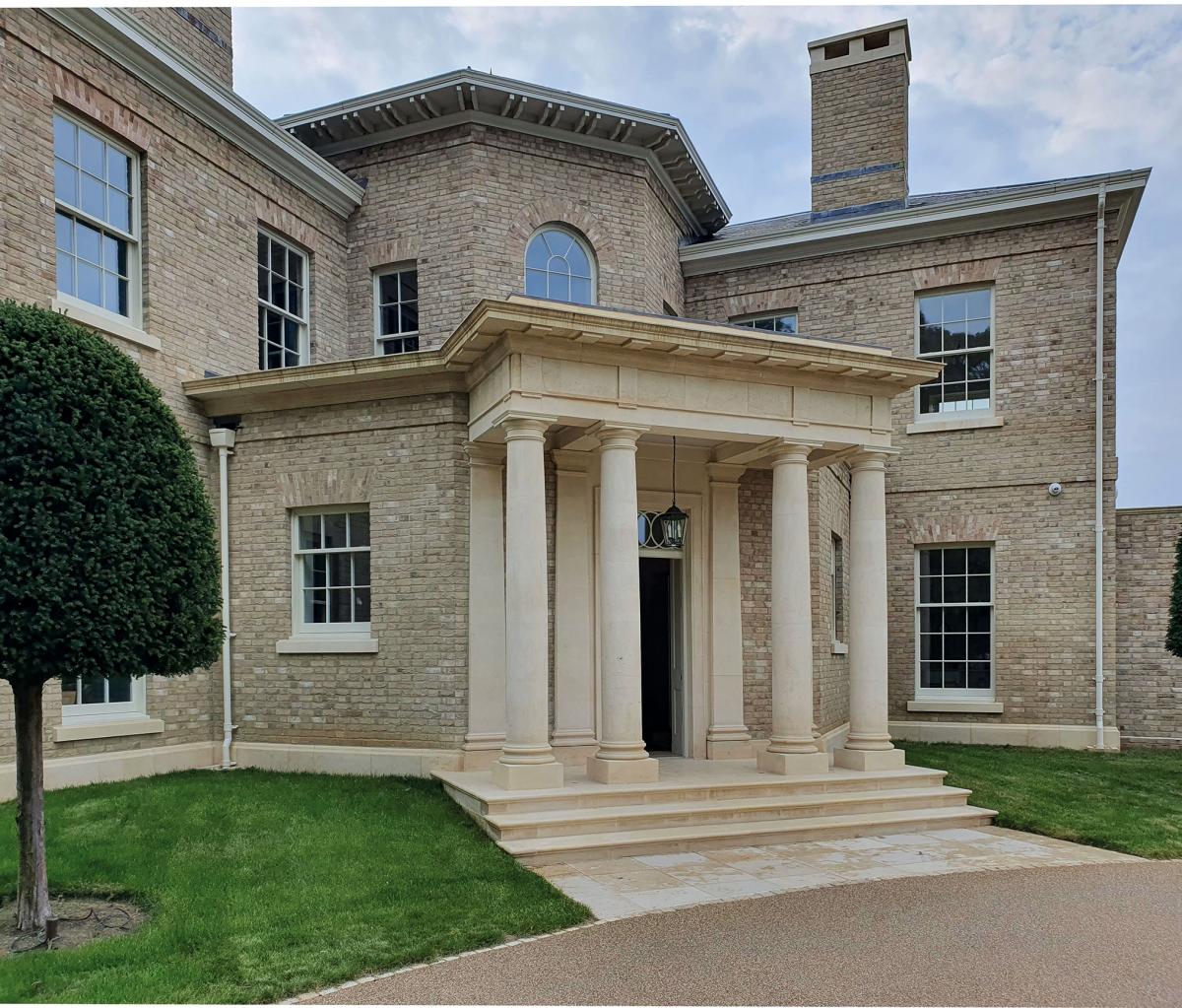 Wanting to ensure the local stone that has been used in Sussex and Surrey for centuries continued to be available was part of the reason Dale established Traditional Stone in the first place. Fittleworth lower green sandstone quarry, close to what are now Traditional Stone’s headquarters, was in danger of closing.

It is a big quarry, covering more than 60 acres. It was once worked by several companies, although Traditional Stone is now the only company extracting the stone, working an area of 2.4 acres with a further 21 acres of consented reserves.

Dale had been sawing the stone for 20 years and was familiar with it. He believed it should continue to be supplied, although he concedes it is not the easiest stone to use. “It has a lot of faults in it. You have to be very selective, which is time-consuming and you can only use about 20% of what’s extracted. As masons we can see what’s good and what isn’t. You wouldn’t use it for 75mm cladding but we don’t have any trouble with it as walling and architectural masonry.”

And he wants it to stay that way, which is why he does not sell block to other companies. If inappropriate stone were used it would start to get a poor reputation and nobody would want it, so Traditional Stone only sells sawn six sides, walling or finished masonry. As a result, the quarry is thriving.

The company’s second quarry, Hook, supplies Wealden sandstone. The quarry is small by comparison at about an acre. It was being operated by a farmer. Traditional Stone was buying the stone but felt the quarry had greater potential. Dale and Danny approached the farmer. Danny: “We could see the potential. We said to the farmer: look what we’ve done with Fittleworth. We can do that with Hook.”

Traditional Stone has even developed its own grout. It is manufactured to the company’s specification in China. Holes are drilled and the grout poured in. It expands over night and in the morning the block is free from the quarry face. It is so successful Traditional Stone is now supplying the grout to sandstone quarries in Yorkshire. The warm, honey-coloured Wealden sandstone can be seen on many properties across Sussex and Kent and is routinely used for the repair of stately homes, churches and listed buildings. Again, it is supplied by Traditional Stone as sawn six sides, walling and finished masonry only. Extraction of the stone takes place a few times a year, with several hundred tonnes taken at a time.

As well as the stones from their own quarries, they always have Bath, Portland and Yorkstone in stock.

And because French limestone is commonly encountered on the south coast of England, used ever since the Norman conquest in 1066 because it was what the conquerors’ French stonemasons were familiar with, there are blocks of Caen stone in Traditional Stone’s yard. The use of it for the replacement stonework at Christchurch Priory was because it matched what was there before.

Traditional Stone ensures it has enough in stock – some 20 tonnes of it – to meet expected demand. The most recent delivery was just before Christmas, so the directors do not yet know whether Brexit will present delivery problems or not. It certainly did give the French driver who delivered the latest blocks an unhappy Christmas. Having delivered them he could not get back across the Channel for eight days and spent Christmas and New Year parked on the M26.

Traditional Stone is always happy to talk to other companies wanting its stones or its services and to receive visitors. But if you visit, don’t forget to shut the gates.

Pictured below are views of the Traditional Stone premises. 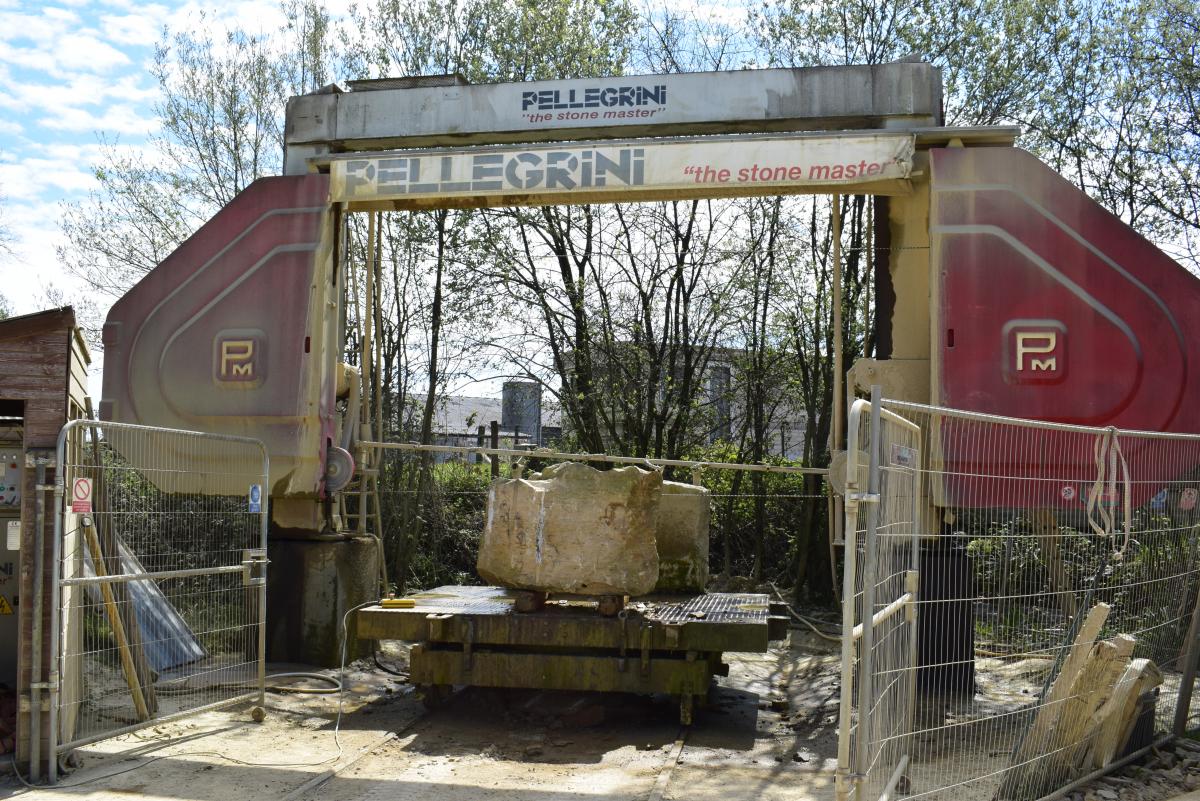 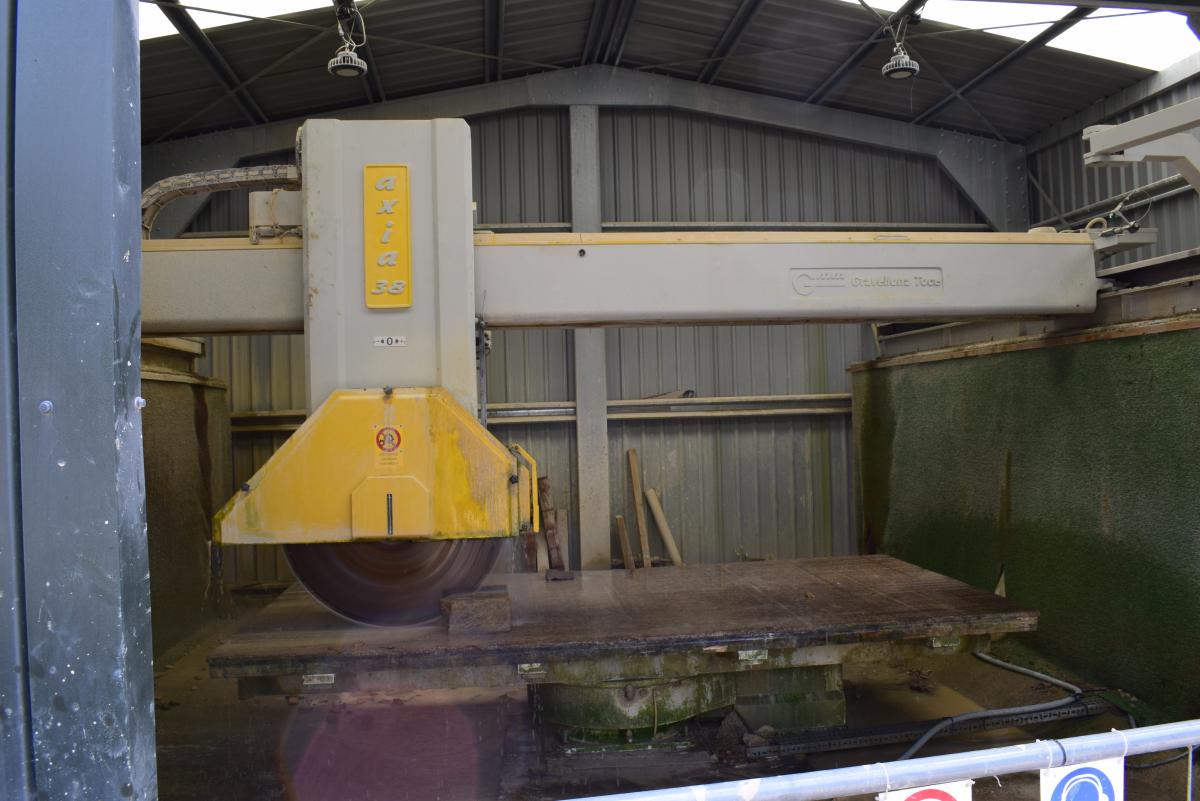 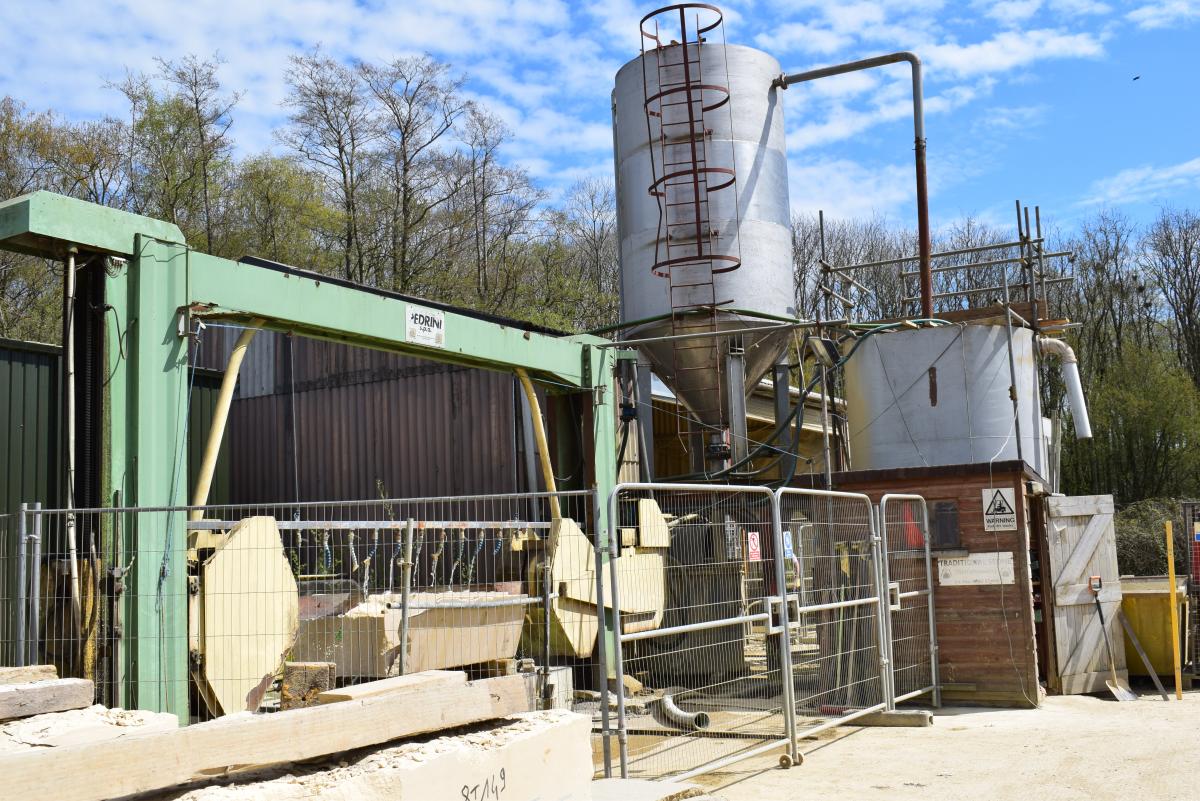 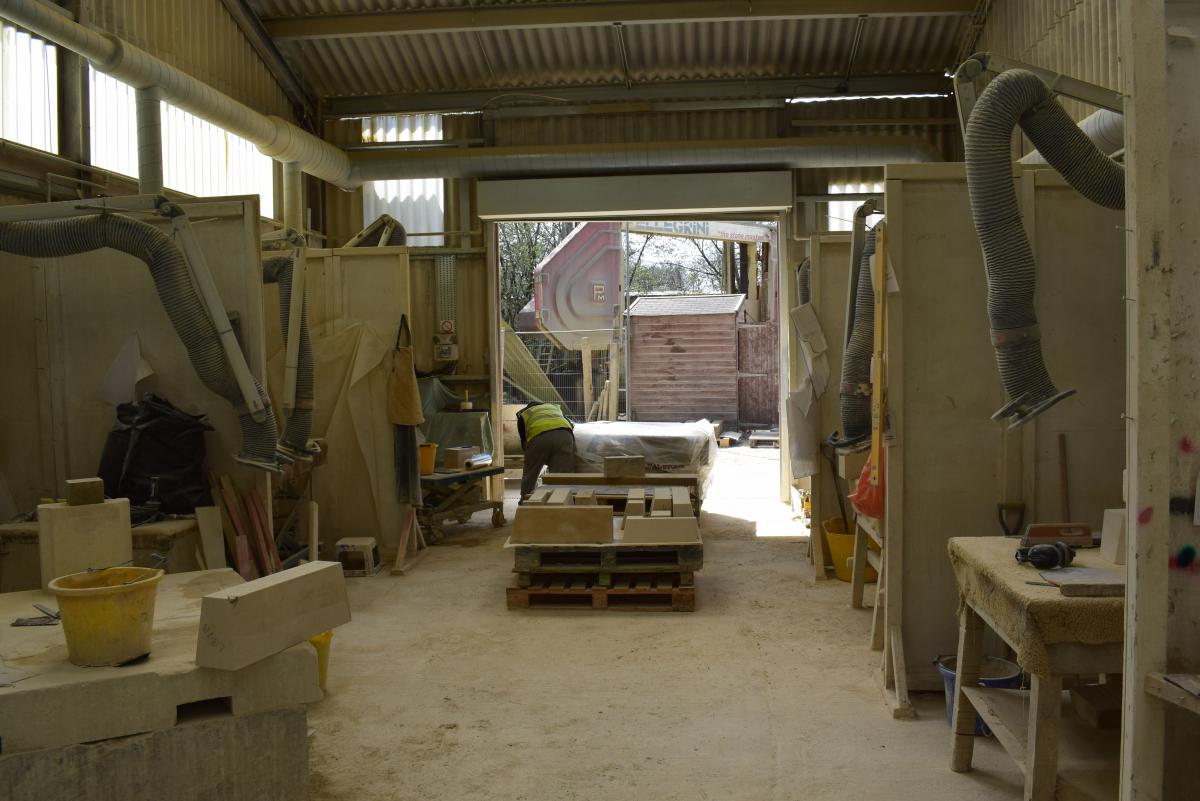 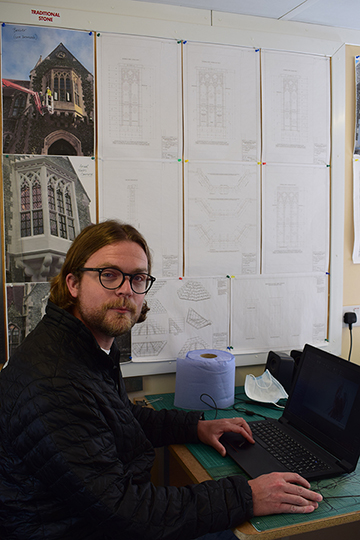 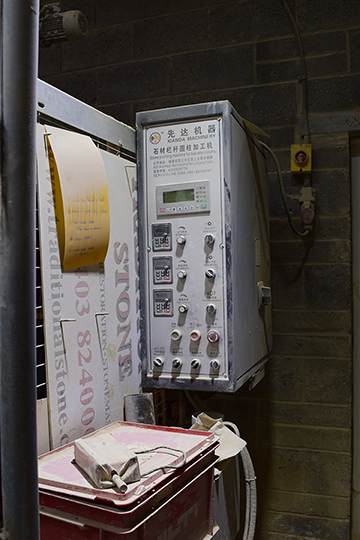 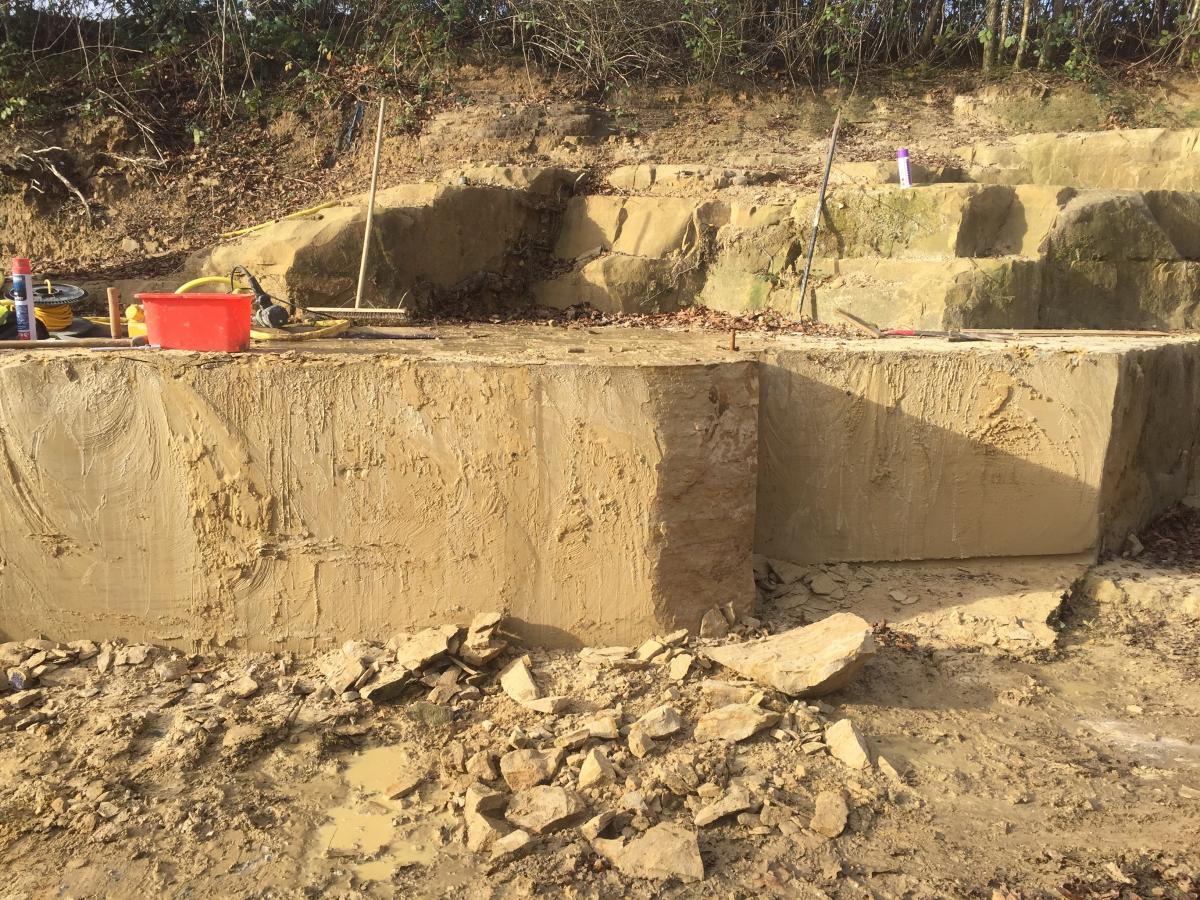