Work has drawn to a close on a year-long project to re-clad with a patented system of Welsh slate a listed Georgian dairy that has been re-purposed for the 21st century.

The Grade II* listed Cobham Dairy, in the grounds of Cobham Hall School for girls, has been lovingly restored by building preservation charity The Landmark Trust into a holiday home available for booking by the public.

The building, which was constructed in 1796 to a design by the renowned architect James Wyatt, has been refurbished using a system that involved laying slates butt-jointed rather than overlapping.

James Wyatt had a vested family interest in developing the use of slate in general as his brother, Benjamin, was the agent for Lord Penrhyn in North Wales and, from 1786, managed the Penrhyn slate quarries.

The Wyatts began to experiment with slate cladding on walls as well as roofs, giving the Welsh slate a sanded oil paint finish to imitate a sandstone or limestone.

The original slates were riven with inward-facing bevel-dressed edges. Over the years, Cobham Dairy fell into disrepair and the paint had weathered away. Many of the slates had fallen off because the iron fixings used to fasten them had rusted.

Only those on the sheltered west elevation remained in place along with a few shaped fragments in the reveals around the arcade arches in the cloisters. They provided evidence of the high level of craftsmanship involved in the technique.

The remaining salvageable slates were carefully stored by the school, overseen by a Society for the Protection of Ancient Buildings (SPAB) working party that re-roofed the building in double-lapped 500mm x 250mm Penrhyn Heather Blue slates in the 1980s.

It is a testament to Welsh Slate that what survived was able to be re-used for the repair of the cladding, supplemented by 100m2 of new 15mm-thick slate panels of up to 1,000mm by 500mm sawn by Welsh Slate.

Cwt-Y-Bugail slates from Ffestiniog, both operated by Welsh Slate, which became part of the Breedon Group in 2018 when Brededon bought the previous Welsh Slate owner, the Lagan Group.

The slates were installed over the brickwork by specialist contractor Colman Contractors.

The slates were shaped on site to replicate blocks of stone by a team of 10 people and fixed to all the external brickwork using stainless steel screws, which should last longer than the original iron fasteners.

The slate was then painted with a mineral paint mixed with sand to give it the look of block stonework, replicating the look that James Wyatt had originally created 200 years ago.

Caroline Stanford, a historian with the Landmark Trust, says: “Landmark retrieved those salvaged tiles and it has been like a giant jigsaw puzzle to re-use as many as we could.

“Replacements were ordered from Welsh Slate based at Penrhyn and, as in the 18th century, any colour variation did not matter as we were also reinstating the sanded paint finish.

“With long-term maintenance in mind we used resin plugs to conceal stainless steel fixings, but the end result once again looks just as James Wyatt originally intended in 1795 for this prettiest of model dairies.”

Ornamental estate buildings were the height of architectural fashion in the 18th century and the Cobham Dairy was conceived to represent a tiny Italianate chapel topped with a slate-clad bell tower and four corner pavilions.

The central chamber is encased behind miniature arcades of ‘cloisters’ fronted by an open loggia facing north towards Cobham Hall.

This picturesque exterior concealed living quarters for a dairymaid and a central dairy, with exceptional plasterwork and finishes to make it suitable for fashionable aristocratic tea parties as well as for butter production.

Apart from its aesthetics, the slate cladding is believed to have also served to help keep the dairy cool.

Inside, the plasterwork of the main vaulted chamber and other rooms is ruled to look like stone and painted in the same sandy stone-effect finish as the exterior.

Eric Colman, managing director of Colman Contractors, said the listed dairy required total restoration, the most challenging aspect of which was simply access to it as it is in the middle of a large field owned by the private school.

Below: The finished dairy. 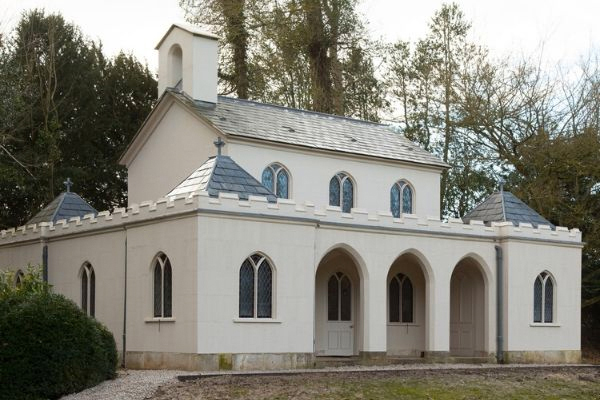