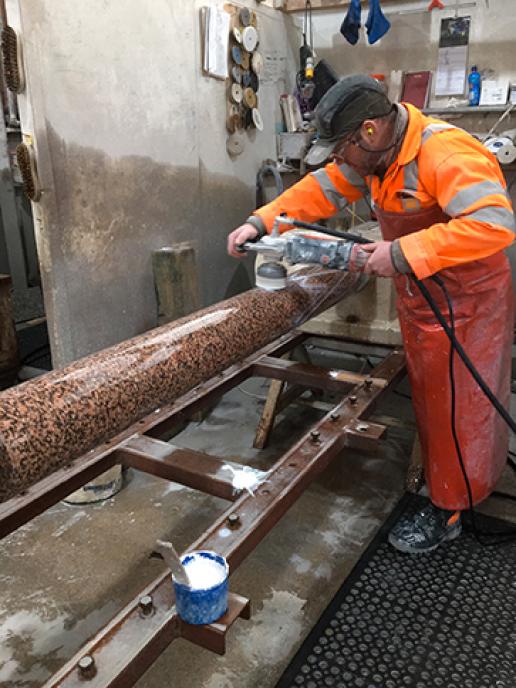 Peterhead pink granite being worked by Fyfe Glenrock in Aberdeen ready for shipping to New York.

Three ornamental pillars crafted of Peterhead granite from Aberdeen by stonemasonry company Fyfe Glenrock have gone across the Atlantic to be used in the restoration of the historic building of The Windermere on New York’s upmarket Upper West Side.

Fyfe Glenrock identified the  granite required for a small part of the multi-million-dollar restoration of the Big Apple’s oldest apartment block from a photograph sent to it of the existing columns.

The difficulty was sourcing the granite as the major quarries closed many years ago. The granite is still quarried at Stirlinghill and Longhaven quarries, but these days it is mostly crushed for aggregate.

Eventually Fyfe Glenrock was able to source 40 tonnes of blocks from Stirlinghill quarry from which it made the pillars required.

Fyfe Glenrock is in Aberdeen’s Oldmeldrum. It was contacted by Swenson Stone Consultants in New Hampshire, who sent the photograph.

Fyfe Glenrock’s Commercial Manager, Richard Collinson, says the company had worked with Swenson in the past, so it was understandable it would contact Fyfe Glenrock again.

It was clear from the photos that the pillars were made from Peterhead granite. “It’s always very interesting when we get an unusual request like this,” says Richard, “and we’re delighted to be able to help restore a building of such significant historical interest.”

The Windermere was completed in 1881. It comprises three, seven-storey red brick buildings. The apartments were marketed as homes for “the new woman” – a growing class of single and financially independent females. The building had hydraulic elevators and even telephones.

Many decades later one of The Windermere’s most famous residents was actor Steve McQueen.

The building slowly fell into decline and in 2007 was declared unsafe by the fire department. Two years later it was bought by a developer and the major refurbishment began. It now has apartments, a plush hotel and retail space.

Peterhead granite comes in red and blue. The red is often used for ornamental construction – it is found in many buildings in London, Liverpool and Cambridge – and among the blue’s uses is the fountains in Trafalgar Square in London.

The new pillars for The Windemere produced by Fyfe Glenrock use the red.

Richard Collinson says: “If you look at the history books, a lot of masons from the north east of Scotland migrated to and from America in the late 1800s.” It is understandable they would use familiar materials.

Fyfe Glenrock has more than 160 years’ experience in granite quarrying and craftsmanship and has provided indigenous Scottish granite for projects including The Scottish Parliament, the Millicent Fawcett Suffragist Memorial in Parliament Square, London, and, more recently, The Silver Fin Building in Union Street, Aberdeen.