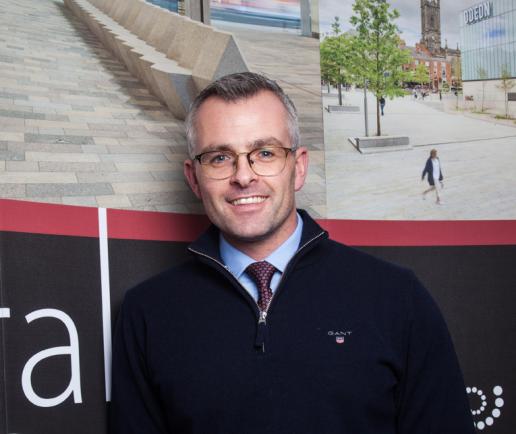 Dave Stanger, who heads the natural stone team at Marshalls Mono, talks about Marshalls' efforts to raise the profile of its British stones.

Marshalls has decided to make it easier to choose low carbon, environmentally friendly British stone. Director Dave Stanger talks about this and other developments at the market-leading company.

With more than half-a-billion-pounds-worth of sales, Marshalls is the undisputed heavyweight of the stone industry in the UK. Not all those sales involve natural stone, but a lot of them do.

Marshalls operates 13 of its own quarries in the UK, is a major importer of stone, and is a member of Stone Federation Great Britain, even if it does also supply a variety of concrete and ceramic products.

What the markets want, Marshalls is happy to supply, which is why Dave Stanger, the Trading Director of Mineral Products who heads the natural stone business of Marshalls Mono, says: “We’re not a stone company; we’re a provider of landscaping solutions.”

Marshalls' Scoutmoor Yorkstone in Heroes’ Square at the National Memorial Arboretum intricately inscribed with badges and crests of the Royal Navy, the British Army, the Royal Air Force and London Livery Companies.

Even so, customers want stone, especially British stone. Many like the idea of using a local, low carbon product. Sometimes the barrier to doing so has come from the supply side, and Dave says Marshalls is now actively working to make it easier to choose indigenous stone by giving it more prominence. “Our strategy is to be able to offer a suite of materials from the UK, Europe and the rest of the World, but we’re trying to make it easier for people to access British stone.”

A project does not have to be all British stone. It could have a nucleus of indigenous stone and then other materials complementing it. The various tools on the Marshalls website that help people choose and buy the materials they want are now offering more help in making those decisions. “We worked hard on that last year,” says Dave. 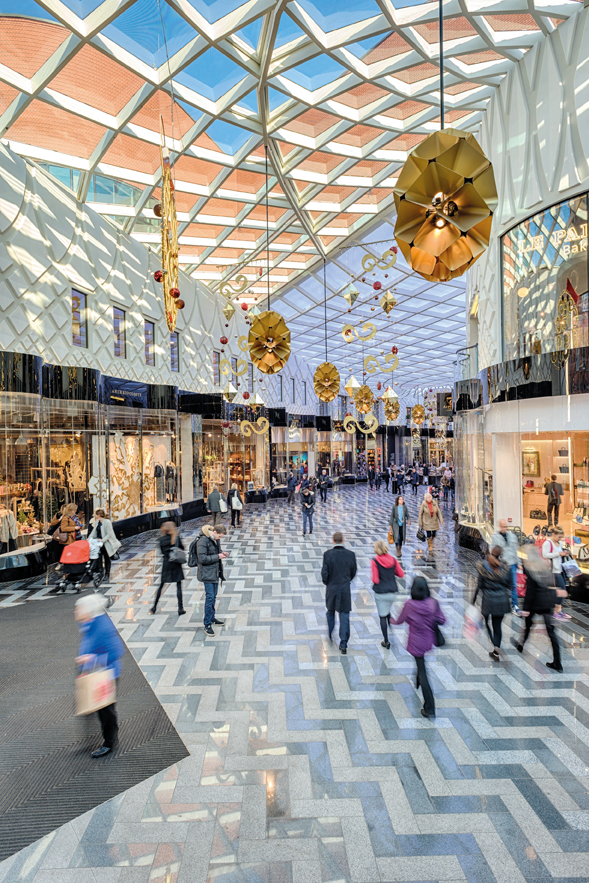 When he took over the reins of Marshalls’ natural stone business in 2012 his aspiration was to make it a service provider, not just a product provider, even though the product range is extensive, including walling, masonry and street furniture, including hostile vehicle mitigation like the stylish Igneo seating and Giove stone planters used outside the Alhambra Theatre in Bradford. Marshalls also offers interior paving... with large scale applications such as shopping malls a growing part of the company’s business since it introduced a range for interiors in 2014.

The attitude of satisfying the markets’ requirements goes back a long way. In the 1990s when most British stone suppliers were complaining about competition from cheap Indian and Chinese imports, Marshalls took the responsible view that it was better to take the lead and bring ethically sound materials into the UK to give specifiers and customers peace of mind against the cheap imports. 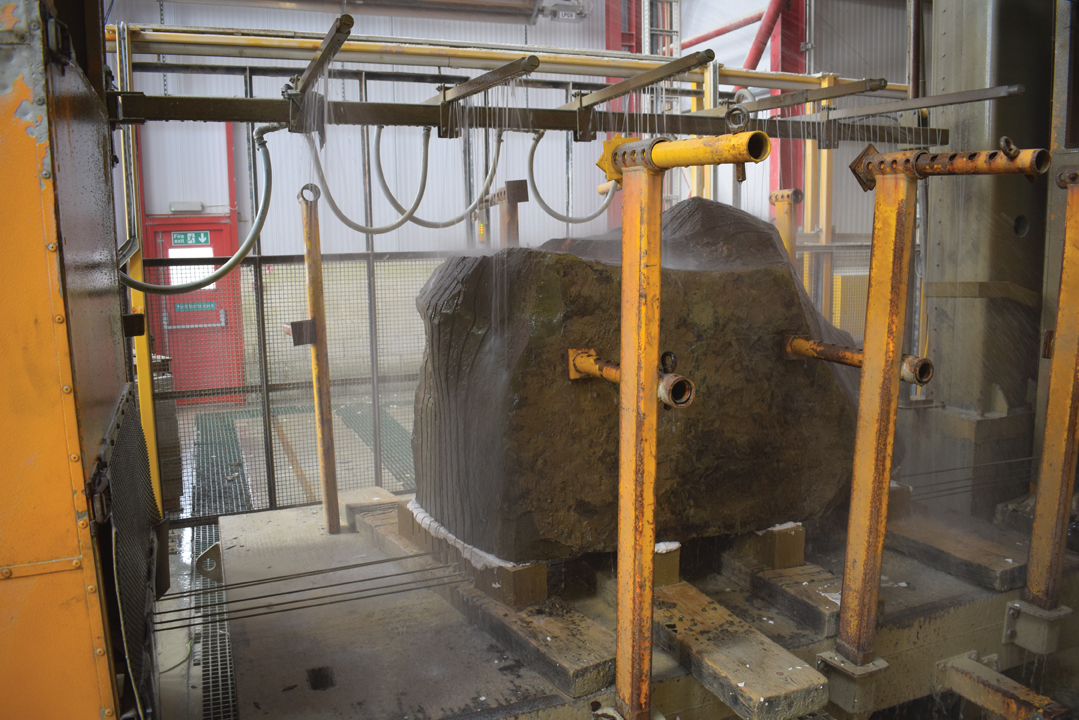 These days Marshalls sources about 40 different stones from 12 countries (including the home nations), with China and Vietnam the major suppliers, although European stones are becoming more popular again as people take into account carbon footprints and delivery times.

Any company sourcing any product from developing countries can potentially find itself suddenly exposed to harmful allegations of being involved in slave and child labour – witness the Channel 4 Dispatches investigation broadcast last month (March) into conditions on coffee plantations. Children who looked as young as eight, according to the programme, were working six days a week for 31p an hour picking coffee beans into 45kg sacks that they then had to drag to a collection point. Starbucks and Nespresso were named as buyers of these beans.

From time to time, conditions in Indian (in particular) sandstone and granite quarries have also been exposed, again highlighting children performing gruelling tasks with no protection from the inherent dangers of working in quarries. Sandstone and granite also contain high levels of silica, potentially exposing workers to inhaling dust that can cause lung diseases including cancer. 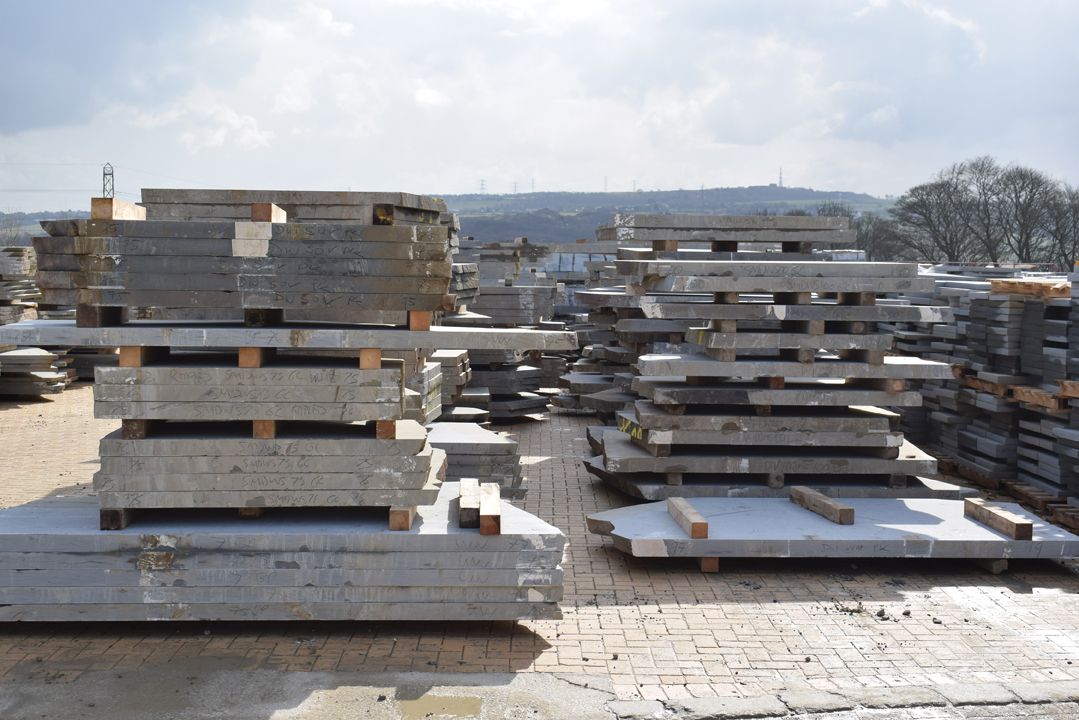 Scants of British stones in stock ready to be sawn to speed up supply.

Both from a humanitarian perspective and to live up to its commitments to the UN Global Compact and the principle of Business & Human Rights, Marshalls has done considerably more than most in the stone industry (in the UK or anywhere else in the World) to ensure its supply chain is free from exploitation and danger – and it has been doing it for longer than most. Chris Harrop, Group Marketing & Sustainability Director, was even made an OBE in the New Year’s Honours List last year for services to the prevention of modern slavery and exploitation.

“It gives some credibility to the value we have put on ethical trading,” says Dave Stanger. “Our brand is important. Clients trust our brand not to compromise their brands. This is one of the ways we do that.”

Unlike most companies in the stone industry, Marshalls is big enough to have to produce its own modern slavery declaration under the provisions of the Modern Slavery Act 2015. While some companies grudgingly produce a perfunctory statement for compliance purposes, Marshalls produces a 20-page brochure proudly detailing all it is doing to protect people in its supply chain. It carries the message on its lorries with designs displaying the words ‘END MODERN SLAVERY’. Its delivery fleet includes more than 100 vehicles with mounted cranes and makes around 375,000 deliveries a year, so a lot of people see that message. 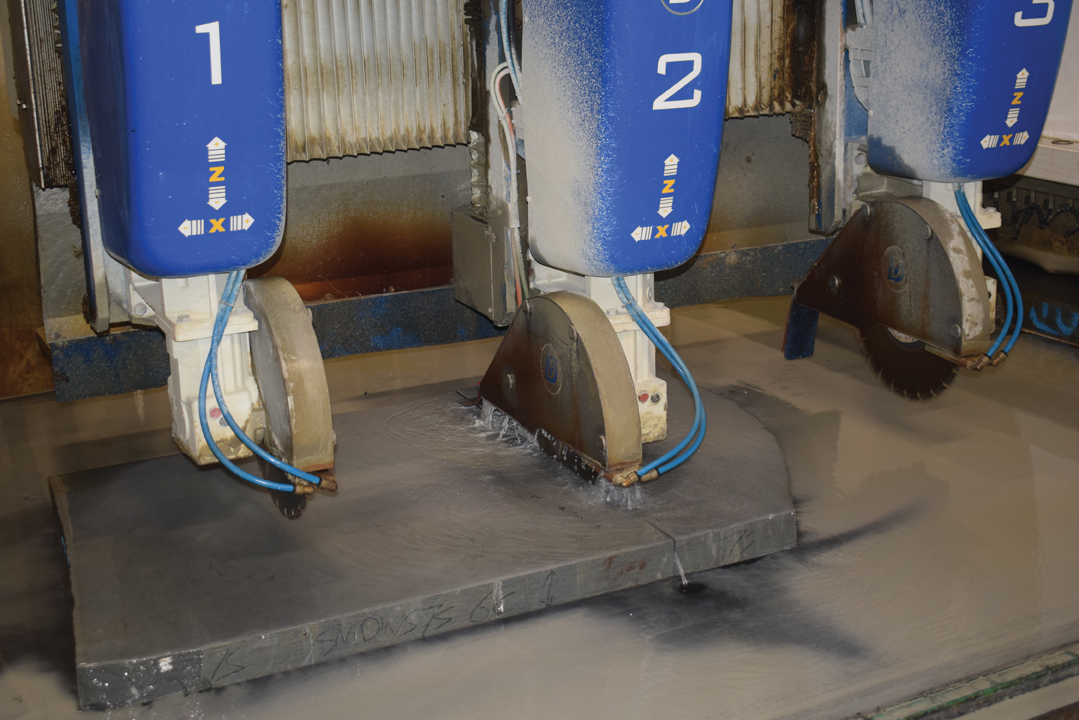 The two production lines each has a three-headed Donatoni SX-3.

Health & safety is just as important in the UK and, with the higher cost of labour, so is productivity. Both played their part in the latest investment in the stone processing facility at Cromwell Quarry in West Yorkshire, where 80 people work over three shifts, five days a week, and there is the ability to flex that capacity.

Although Marshalls operates 13 quarries in the UK and they all produce aggregates, they do not all produce dimensional stone. About 40% of the natural stone Marshalls’ supplies for hard landscaping is its York Stone, although that accounts for 60% of its stone sales by value. Stone is a scarce resource that the company has no interest is selling cheaply.

Dave Stanger puts it this way: “Scoutmoor is 350million years old. It holds inherent value so shouldn’t be considered cheap!”

As he says, he would rather use engineering to add value than strip down prices. Marshalls can do that by offering advice on design, as it has done so successfully at the huge Battersea Power Station development in London.

The investment at Cromwell was also about reducing waste, which it has achieved with notable success. While many dimensional stone quarries in the UK achieve no more than 50% yield (plenty even less), Marshalls has reduced its waste to just 1% from a single waste stream – the sludge squeezed out of the water by the filterpresses in the water recycling process.

This is the only waste that goes back into the quarry at Cromwell because Marshalls has not found any way of making a product out of that waste. All offcuts from processing are crushed to improve slip resistance in concrete.

“There’s no secret to our success,” says Dave. “We have a multi-disciplinary approach – we make maximum use of our quarries. Yield is important; we have to use the minerals responsibly – although that applies to the whole design and construction team. The message is getting out that by using the right products in the right way we’re all being responsible.” 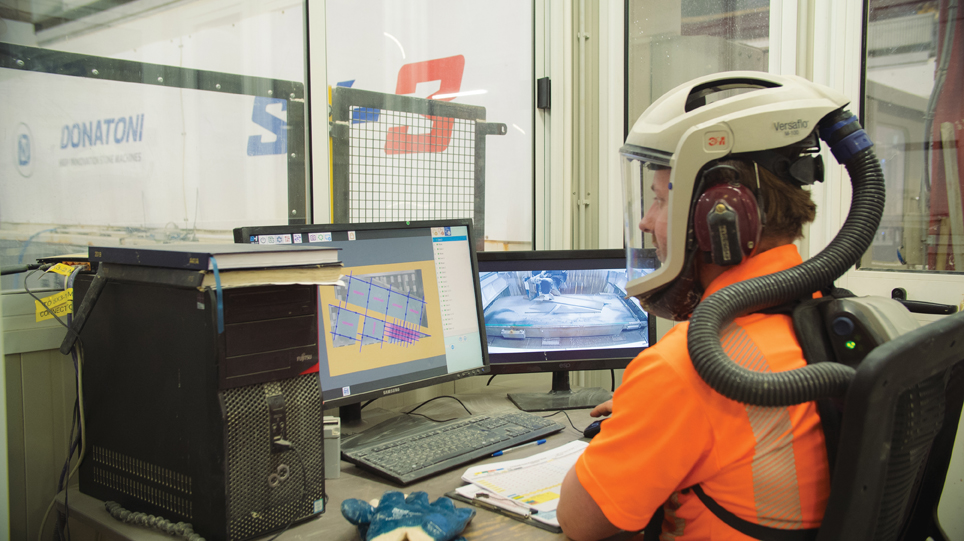 The Donitonis are overseen by an operator well protected from any respirable crystalline silica created in the production process. He is in a cabin and has a positive pressure full face mask.

Reducing waste was one of the reasons the company chose wire saws for the expansion of its Cromwell factory after it received approval from the Marshalls Board for a £3.5million investment in 2016.

Before the investment was made there was “a heck of a lot of research”, says Dave, who followed his father into Marshalls and has worked for the company for 22 years, the past 18 with the natural stone team he now leads.

The research included looking at what Marshalls’ partners in China and India were doing as well as how World-leading Italians were processing stone. Dave: “We had probably 18 months of fact-finding.”

Not that investment ever really comes to an end and a new water recycling system is now planned along with the adoption of some more of what Marshalls learnt from Asia.

Before the latest machinery was installed, consultants were engaged to maximise the efficiency of the factory layout. The building was extended to accommodate three new primary wire saws and secondary Donatoni multi-headed CNC saws. Two production lines have been created with the multiwire Pelligrinis doing the slabbing after single wire saws top and tail the blocks. The wires last twice as long as the discs previously used for primary sawing and cut a kerf of 8mm rather than 11mm, improving yield by 25% .

A five-wire Pentawire and two 12-wire Dodecawires have doubled output, halving the amount of energy needed and reducing the levels of airborne dust by 80%.

The spacing of the wires can be adjusted to produce varying slab thicknesses. And Marshalls does encourage customers to use thinner stones where possible. In the City of London, for example, using 63mm thick paving instead of 75mm has saved 1,300 tonnes of stone each year.

From the primary sawing, each line proceeds to the three-headed Donatoni SX-3s that cut the slabs into finished dimensions. Before the slabs enter the machines they are automatically photographed and cuts arranged to maximise yield, overseen on computer screens by an operator in a protective booth and wearing a positive air pressure full face mask. This level of control has added another 10% to the yield.

The three heads of each of the Donatonis work independently of each other and the machine determines the best configuration of cuts to maximise productivity.

If further processing is required the stones go on to the masonry department with its Prussiani and GMM CNC machines and skilled masons.

The increased use of computers goes throughout Marshalls. In 2014 it launched a ‘Digital First’ strategy to future proof the business. It has even produced its own artificial intelligence voice assistant (like Alexa). It is called Soloman, after Soloman Marshall, who founded his company at the Southowram quarry in 1904. It answers customer enquiries at any time of the day or night.

Marshalls’ enviable reputation has helped win it some of the most prestigious projects in the UK. Now it is also supplying 1,000 tonnes a year of Stanton Moor for the final phase of the 150-year construction programme of Antoni Gaudi’s Sagrada Familia cathedral in Barcelona, scheduled to finish in 2026.

Below. Marshalls' centre for processing its British stone at Southowram in Yorkshire where another £3million has been spent mordernising production.