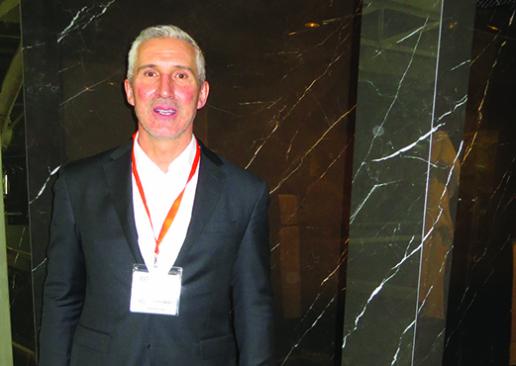 Louis Livramento on the stand of his new company, Clay International, at the Surface Design Show in February.

Louis Livramento, Director of London stone company Livra, used the Surface Design Show at the Building Design Centre in Islington this mont (February) to introduce his new company, Clay International, which he has launched to sell large format Italian porcelain slabs to the trade only.

Louis says he will keep the two companies separate because Livra’s natural stone is at the tailor-made Savile Row suit end of the market, as demonstrated on the Channel 4 programme Inside Britain’s Most Expensive Home, aired in February, where Livra supplied stonework for the £250million house.

Clay International, on the other hand, is offering a lower price alternative to natural stone. “The market is demanding a new product and ceramic is it,” said Louis at Surface Design.

He says he intends to open a Clay International showroom in Wandsworth later this year in premises he owns and has previously rented out.

His aim is to get orders for the porcelains and pass them on to a network of fabricators and installers, although the products can also be bought directly from Clay by fabricators, builders, architects and developers.

The porcelain can be used for lining walls, making furniture, kitchen work surfaces and external cladding.