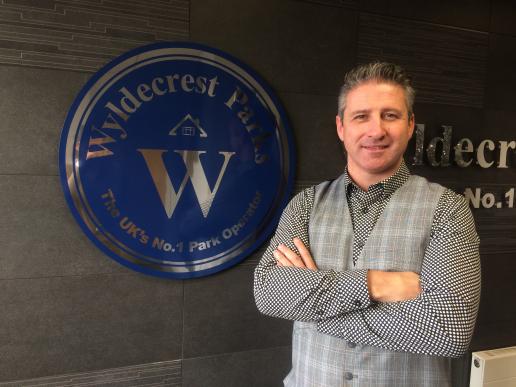 Alfie, the owner of Wyldecrest Parks, says he was aware of the quarry because he bought its limestone for the paths at some of his 77 residential and holiday home parks in the UK (he also has 15 in America).

He became aware the quarry was struggling, so offered to buy it. He has appointed Andrew Walby to manage it as part of a team of currently three people that is expected to increase to five shortly.

The quarry, owned by Dorset Stone Company Ltd and trading as Marnhull Stone Quarries, supplied building stone, masonry, fireplaces and paving, and sawed the stone from other quarries as well as its own with its three saws. It also had guillotines for cropping stone for walling.

Alfie has bought Dorset Stone Company to continue to operate the quarry and has bought the freehold of the quarry through a separate company.

But the machinery is old and the plan is to scrap it and concentrate on supplying block to masons and walling stone to builders, as well as paving products. “We’re not going to continue down the road of cutting stone ourselves,” Alfie told NSS.

The intention currently is for the company to continue to supply stone products, but they will be made by other companies. Alfie says he might review that decision further down the line.

Alfie: “When you get into a new business you have to pay the idiot tax because you’re learning. This isn’t an industry I would say I’m a specialist in but we can add value because we’re customers.”

Manager Andrew Walby says he has walked into a quarry that needs “a lot of tidying up” because it “does look a bit Fred Flintstone at the moment”. Andrew says he has 50,000 tonnes of overburden to move with the 20-tonne tracked slew that will work in the quarry.

The quarry is nicely positioned next to the road so access is easy, although Andrew says it is not currently making the most of its position. He wants to build a wall of the stone at the front of the site so people can see the quality of it.

He says the quarry has extensive reserves of an exceptional stone. “We would like to get going big time.”

For now, the quarry is closed. However, the plan is to have it  back in production and open again this month (May).

With more construction projects re-opening now after a coronavirus pandemic shutdown everyone is hoping business will be returning to something like normal before too long. Andrew says he is already receiving two or three telephone calls about walling stone every day.

The quarry is on a five acre site with four acres left to work and another 27 years of consented planning to work them.