The latest phases of refurbishment at Harrods, one of the world’s best-known stores, saw stoneCIRCLE fabricating and fixing marble flooring, wall panels and display furniture.

Art Deco provided the inspiration for the latest part of the refurbishment of Harrods that has included the consolidation of its menswear department on to the whole of the second floor, rather than being spread across three smaller areas on different floors as it had been previously.

Part of a wider refurbishment project, the Menswear move was overseen by Simon Longland, the Head of Menswear for the store, and David Collins Studio, which designed the floor with one over-arching concept to create consistency throughout its various rooms.

The Art Deco theme was felt to have a traditional stylishly masculine feel of men’s tailoring, with Carrara and Bardiglio marbles used to create the chequerboard floor, bordered by Nero Marquina throughout the department for the walkway floors.

Elsewhere, the same marbles were combined in various geometric patterns with Katuba Sodalite adding the occasional touch of blue.

All the marble was supplied and installed by stoneCIRCLE from its workshops in Basingstoke, Hampshire. It has been contributing to the refurbishment at Harrods for the past five years, starting with the fine watch department. The Harrods team had previously gone to Italy for its marble processing and installation but liked the speed and ease of working with stoneCIRCLE, which smoothed the way for the company to secure subsequent work at the store.

The first part of the Menswear move was Footwear, where Bardiglio is used to create columns for the shoes to rest on, sometimes combined with bands of Carrara with Nero Marquina detailing.

The next two stages, each covering some 250m2, were both part of the Men’s Contemporary area. Concentric and exocentric squares formed of Bardiglio, Carrara and Nero Marquina were used in some areas, with Katuba Sodalite substituted for the Bardiglio in others.

Walls are panelled with Nero Marquina, with Bardiglio in a mixture of polished, scratched and sandblasted finishes.

Then came Men’s Outdoor. Here the panels on the floor saw squares of Nero Marquina and Bardiglio inserted into Carrara marble. Nero Marquina was again used for the wall panels.

Currently, stoneCIRCLE is working on the final Menswear area of Accessories.

Marble for the new Hermes boutique was also supplied and installed by stoneCIRCLE. The floor has Namibian White in the centre with parallel strips of Thassos running width-wise from it. There is Brown Stone marble at the sides of the corridors. Brown Stone is also used on the walls as skirting and edging for some of the display panels. Selected areas of the walls and some plinths are clad in Tarahumara marble panels.

All the stones were sourced in Italy during visits by the client team accompanied by Steve Vanhinsbergh, one of stoneCIRCLE’s Directors. Much of it was due to be delivered just as Italy went into its first Covid lockdown, shortly followed by the UK.

StoneCIRCLE’s Italian agent defied the lockdown long enough to get the stone shipped. When it arrived, the UK was in lockdown and Harrods was shut, but stoneCIRCLE continued working, even though some of the staff were furloughed.

Steve Vanhinsbergh continued to go into his office each day to oversee the work and says it was one of the few times in his life when his workload actually went to plan because he did not receive any calls from sites or customers with matters that required his immediate attention. “It was lovely,” he says.

The stone was cut on stoneCIRCLE’s GMM Brios (soon to be joined by a GMM Litox to take advantage of the ‘super allowance’ on capital expenditure announced in the Spring Statement) and its Techni five-axes waterjet, helped by an older waterjet, to produce the floors as panels of 1m square, finished on the Denver face polisher with a bit of assistance from  the company’s manual Jenny Lind.

Slabsmith photo station also played a major part in the process. It creates dimensionally and tonally precise digital versions of slabs that were used to create  pinpoint matching of the veining in production for perfect results. “David Collins Studio designed the floors and we made them work,” says Steve.

With the stone manufactured during lockdown it was ready to go straight to Harrods when contractors TC&D and Jaysam re-opened the site.

Keeping up with the programme at Harrods has always required careful planning because of the lack of space for storing materials on site. It requires just in time delivery, all the materials being unloaded at a building opposite Harrods and pushed up a ramp under the road into the store – and pushing 800kg of marble uphill on an A-frame was just one of the challenges of this project.

Another part of the Harrods refurbishment was the extension to Harrods’ Shoe Heaven.

It continues the themes of the shoe department that opened in 2014, giving 4,000m2 dedicated to shoes and continuing stoneCIRCLE’s work on the refurbishment of this prestigious retail store.

Commissioned by contractor Jaysam for this phase of the project, all fabrication was once again carried out by stoneCIRCLE in its Basingstoke workshop.

Crema Martel was used on the floors with Grigio Stardust inlaid in interlocking geometric patterns with Nero Marquina borders. The floor joints are resin filled and the whole floor was ground to a honed finish after installation. 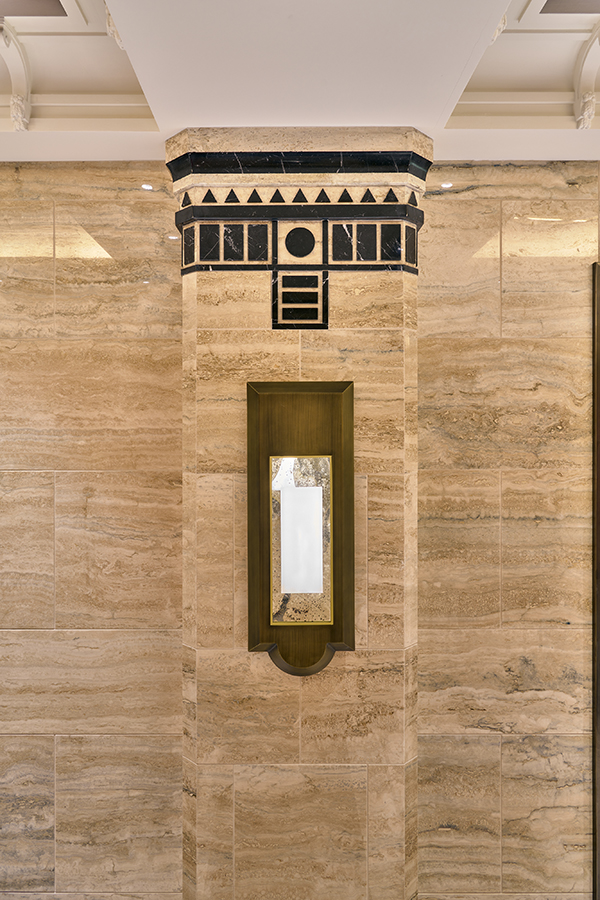