STONEMASONS: AF Jones is sprinting forward to be in for the long run

AF Jones has three strings to its bow: architectural stonework, heritage and interiors. With Megan becoming the sixth generation of her family in the firm and charged with business development, and a new factory for interiors due next year, optimism abounds.

At the front of AF Jones’ workshops and new showroom in Ipsden, Oxfordshire, a carved runner leaves the starting block in the first column of a portico. He runs from column to column, the bold lines and modern idiom of the carving symbolising the innovation and modernisation of the company. On the sixth column, embellished with intricate hand carving, he stretches for the finishing line. 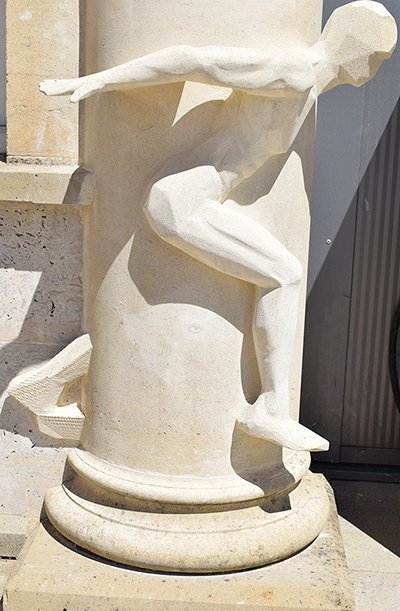 The columns were produced on a six-axes CNC in the AF Jones factory. They are gritty and poignant art, with the last figure hand carved by one of their own developed apprentices, symbolising not just the company’s ambition and continual development, but also the importance of craftsmanship underpinning everything that AF Jones does.

This balance of acknowledging the rich history of the company and the family that founded and continues to run it, and keeping alive the craftsmanship of architectural stonemasonry while never standing still, always looking to innovate, challenge and look forward is “absolutely central” to AF Jones and its culture, says Megan Jones. She is the daughter of Managing Director Angus Jones and the sixth generation of the family to join the business.

The latest addition to the displays outside the premises shows an impressive post-tensioned stone staircase mounted on a frame (pictured left). Feature staircases have become an important aspect of modern interiors and the display emphasises AF Jones’ focus on interiors as one of the three major sectors of its business along with architectural and heritage stonemasonry.

AF Jones is a traditional stonemasonry business that has historically concentrated on the architectural and heritage sides of the industry. But Megan points out that the stone interiors market has been growing significantly. Angus makes it clear that AF Jones has been delivering high spec, sophisticated interiors projects for certain clients for decades, but that investment in this growing sector is backing the team, their knowledge, and a long-held view that they can do better in this market.

AF Jones’ main premises are on the A4074 that runs between Reading and Oxford. The site is called, appropriately, The Old Quarry Works, although before Angus bought it in 2001 and finished moving the AF Jones works out of its town centre premises in Reading in 2007, it had been a garage.

The new showroom was built to enhance and emphasise the interiors sector, which it does with a minimalist yet striking visual style – screens display past projects and the full visual scope of the products are on display there.

Angus says: “It’s aimed at allowing clients and project partners the scope to spark imagination and as an inspirational setting for us to have meaningful conversations. You need a space to thrash things out.”

And the the two metre tall bespoke-design post tensioned staircase taking shape on a steel frame jig at the side of the new building is the evidence of that ambition, showing the company’s intent to innovate, challenge and be forward thinking.

Elaborate stone staircases have become a major feature of top-of-the-range residencies in recent years – and many properties in Oxfordshire, London and the Home Counties, where AF Jones works, are certainly top of the range.

At first, most staircases were cantilevered into the walls of properties, but lately, threading steel through the stone and tensioning it has allowed even greater versatility of design and visual impact.

Angus says: “Forward thinking design, making partnerships and not losing sight of quality are key to our success.”

With challenging work comes the need for the company’s staff to challenge how things have typically been done, and Megan is an important part of that way of thinking.

Family firm it may be, but Megan had to establish her own skills and commercial credibility among an already strong family presence. She says it had always been made clear that nobody could simply join the firm because they were part of the family. They had to go out into the world and bring what they learnt back into the business.

As the new Business Manager at AF Jones, Megan brings with her experience and understanding of best practice manufacturing processes, business development, as well as marketing gained from working in the fast-moving consumer goods field and an MBA from the London School of Economics (LSE).

And with stonemasonry ever-present in her background, Megan is also keenly aware of the values and ambitions of the company, as well as its long background and sense of history. “We’re creating legacies,” she says. “That was a key factor why I wanted to work here. What we do here is just beautiful. It is appreciated by us, and will be appreciated for generations to come. But we’re a hidden gem. It’s pushing open that door to get better known.”

As well as her father, Angus, Angus’s brother, Ken Jones, works at the company, joining after 17 years with Buro Happold Engineering in 2015. Ken’s skills as an engineer fit well with AF Jones, and now Angus and Ken believe Megan’s skills bring the business on another step.

Angus: “Being a modern family business brings many positives, especially when it comes to the integrity and values we want to carry forward with us. However, it does not define us. Our team and our combined vision and ambition for crafting challenging, difficult and interesting work is what drives us.”

The philosophy spans heritage, masonry and interiors, and Megan says identifying these three sectors as specialities within the business is a new departure for AF Jones. They have even created two separate websites in recognition of the different customer base they are aiming to reach.

“Today’s world is totally different to what it was,” says Megan. “If you want a staircase you’re Googling ‘staircase’, not ‘stonemasons’. We are stonemasons, but we are also specialists in these three sub-sectors and we want to communicate this effectively.”

At the heart of the business are the 38 people who work there. Some of those at Ipsden and on-site have been there since they were apprentices. As Angus says: “Apprentices we had when I joined my dad in the business in 1993 are now running the factory. Training is the lifeblood of the industry.”

He says looking after the staff is important because: “They make up our DNA. People want to work for a company where everyone’s valued, where they know they have a future. And they are the people who will pass on centuries of stonemasonry skills to the next generation.”

Megan adds: “I’m 100% an advocate of developing people within the firm. It’s better to develop your own people within your own culture. We work hard but there’s a real team focus and support for each other and being proud of what we achieve.”

Everyone at AF Jones gets together on a Friday once a month so they all know each other, whatever department they work in. “It’s communication. If people get on it solves half the problems,” says Megan.

She also gives the example of Libby Button, who started with the company as a yard manager but wanted to learn to operate a CNC and get involved with the growing interiors side, which she is currently doing.

Another advantage stone has and can benefit from promoting is its low environmental impact.

Megan: “Sustainability is incredibly important to us. We have to take responsibility for our future generations just as we do to make sure our stone lasts just as long. It’s also important to our clients. They’re our partners to success and they want sustainability.”

The next move in that direction will be solar panels on the workshop roofs and possibly a fleet of electric vehicles, especially for going into London and other city centres with diesel bans and pollution charges. A charge point has already been installed at the AF Jones premises.

AF Jones has invested in the workshop as well as the showroom, increasing production capacity fourfold.

The company already owns land adjacent to the site and has plans to extend the factory by a further 350m2. Planning permission has been obtained and the intention is to open the new area of the factory next year, increasing the space for interiors and freeing up more room for the architectural stonework side.

The company is making the investment based on better information than it has ever had before, thanks to the customer relationship management (CRM) system it installed in September 2021.

Angus: “Ken, Megan and our team are bringing us into the 21st century, and part of that is having some proper reporting instead of my gut feeling.”

As well as having the CRM software, the four GMM saws in the factory, two Omag CNCs and an Intermac, and a new GraniRoc wire saw are all linked and run by Alphacam software reporting back to the office. “The Saw Shop Production Office is like being on a ship with everything connected to the bridge,” says Angus.

Having all the information the software provides at his fingertips is helping him feel confident about the future. “We have a great working environment and we are very proud of that. The investment in technology and people, built on a great culture, means we are well set for the future.”