Valentia slate from Ireland was used by Pugin for the floors of the Houses of Parliament when he rebuilt them after a fire in 1834. It has been used for the repair of those floors since 2004. The slate has a reputation for being durable and attractive, not just as flooring but also as walling and paving, as well as worktops, memorials, furniture and, of course, roofing. The mine from which the slate comes has a new owner, who aims to expand the sales of the material. Peter Cox of Carrig Conservation International is helping to achieve that aim.

The island of Valentia just off the coastal Ring of Kerry in the south-west of Ireland is where Valentia Slate comes from. The island has a mountain of slate that started to be extracted in 1816, creating an adit that today provides vehicular access to the reserves in the underground quarry in the hill on a 130-acre site.

At its height, Valentia Slate employed more than 400 men extracting and working the stone. These days machines do most of the work.

The slate is hard and almost impervious and became fashionable in London as well as Ireland when it was first extracted. It played its part in such landmark buildings in London as the Houses of Parliament as they were rebuilt by Pugin after a fire in 1834; the National Gallery; the British Museum; Westminster Abbey and Westminster Cathedral.

It was also used extensively for snooker and billiard tables, including examples made for Queen Victoria’s husband, Prince Albert, and the Duke of Wellington. Both tables still exist.

More recently, the slate has been used by stone specialists DBR for repairs to Pugin’s floors in the Houses of Parliament, as well as at the Irish homes of Sarah Jessica Parker (Carrie Bradshaw in Sex and the City) and Irish singer-songwriter Bono (among others).

The quarry was brought back into production by Michael Lyne and Patrick O’Driscoll, both of whom ran other businesses and at the ages of 67 and 77 (respectively) decided last year to sell the quarry to Aidan Forde from Killarney, a geologist who has become a businessman involved in the drinks industry and windfarm energy generation.

The slate is dark red-to-purple, fine-grained, well compacted, has exceptional flexural strength of 67MPa and porosity of better than 0.1%. It is uniform and generally contains an attractive figure arising from bioturbation of the original fine grained sediment. The rock splits well, although not very thinly. It is easily machined, takes a good polish and is amenable to a variety of surface sealants.

The island itself is of international significance for the Devonian fossilised footprints of a tetrapod amphibian. The footprints date back to somewhere between 350million and 370million years ago and provide the earliest reliably dated evidence of animals leaving the sea and taking to the land.

The aim of the new owner is to continue current activities but with an added emphasis on architectural uses of the slate.

This approach has been informed by three recent reports: test results from Sandberg and two reports from Carrig Conservation International, which acts as technical consultant to Valentia Slate, on the performance of the slate relative to other comparable products on the market.

The reports will be posted on www.valentiaslate.com shortly and can be requested from the company in the meantime. On this basis, the quarry plans to complete the process of obtaining CE marks for its products and will seek to supply to projects of high architectural value.

Valentia Slate is aware of the industry focus on the reduction of greenhouse gasses and the various reports that show natural stone has a smaller carbon footprint than most other building products.

Because of the carbon involved in transport, natural dimension stone sourced close to its point of use is particularly low in embodied carbon. For this reason, Valentia Slate intends to re-cultivate its historical market in the UK and will obtain an EPD (Environmental Product Declaration) to facilitate its use in green and low carbon buildings throughout Europe.

A major redevelopment is planned for the underground part of the Valentia quarry, including putting approximately 60,000m3 excavated 150 years ago to use for whisky maturation.

The ‘old’ 19th century outer part of the quarry will be re-purposed as an inside-outside events space, as has been achieved to great effect in some Italian Alpine quarries. Grafton Architects will lead the design team, with a planning application anticipated later this year. Grafton recently won a RIBA Gold Medal and the Pritzker Prize that recognises architecture’s contribution to humanity. Valentia Slate is excited to be working with such eminent architects.

Quarry operations, including processing, will continue in the ‘new’ quarry that dates from the 1890s. 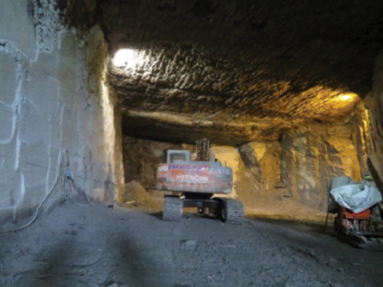 Above is a view of the ‘new’ quarry opened in the 1890s. Below are slate capping stones for conservation works at one of Ireland’s World Heritage Sites, Skellig Michael. The flowers are some of the wild orchids that grow at Valentia Slate Quarry thanks to the mild climate from the Gulf Stream. 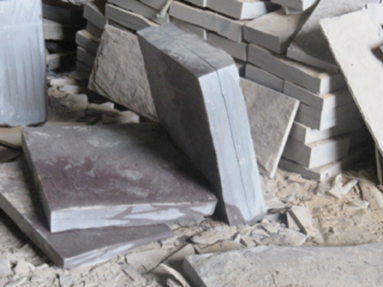 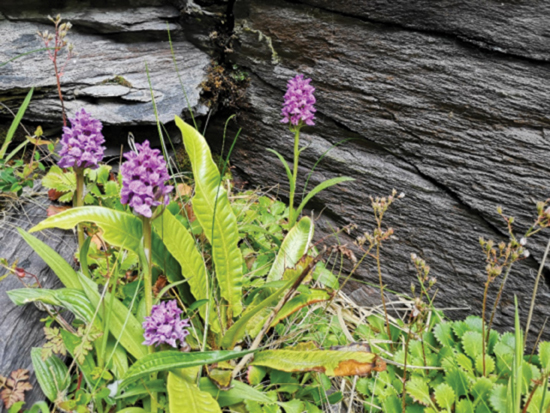 Carrig Conservation International Ltd is a materials science-based conservation specialist now celebrating 27 years in business. Its traditional business has been in conservation, although about a quarter of its work has always been in new build, where it offers independent technical advice and testing of stone to determine the most suitable for the project geometry and micro-climate.

In recent years Carrig has expanded its service with the development of a Research Division and an Energy Efficiency in Traditional & Heritage Buildings Division. The research division has recently completed a major report entitled Understanding Carbon in the Built Environment for Historic England. Peter Cox is Managing Director of Carrig and President of the ICOMOS International Scientific Committee on Energy, Sustainability & Climate Change.