The work of architect Craig Hamilton at Williamstrip Chapel on a private estate in Gloucestershire has been widely acclaimed. The interior stonework received recognition in Stone Federation’s Natural Stone Awards by winning the Craftsmanship Award. Heading the stone element was Architectural Stone, part of the MS Group that grew out of Mosford Memorial Masons in Wales.

The restrained Classical architecture of the newly built Roman Catholic chapel on the Williamstrip Estate in Gloucestershire, which can seat 72 people in its pews, has received widespread acclaim. It has even won a Georgian Group Award for Best New Building in the Classical Tradition.

The walls of the new chapel are Stoke Ground Bath limestone ashlar on a plinth of Clipsham. The floors and other interior stonework (columns, altar, ciborium and so on) include Portland limestone, the white marble of Carrara and contrasting polished dark Irish Blue Kilkenny limestone to remind the client of his homeland. It was the interior stonework that gained the Craftsmanship Award in the Stone Federation’s latest two-yearly Natural Stone Awards, presented in December. The Judges said the stones chosen were perfect and it was evident that the client, architect and masons worked together as a close team to create such an impressive result.

The fact that they did was reflected in some small changes to the design during construction.

Kieran Finn, the Edinburgh’s Telford College-trained mason from Architectural Stone who headed the Architectural Stone team on-site, told NSS: “From a mason’s point of view, I would have made a lot of the stones into two stones, so there’s less waste and it’s easier to lift.” Lifting the stones was a lot easier than it might have been, however, because the client constructed a barn, complete with a gantry crane, over the site where the chapel was to be built before work commenced. It was heated, so construction, which used St Astier NSL 2 lime mortar, mostly for joints of just 2mm, could continue throughout the winter whatever the weather outside might be like.

It also helped to keep stonemasonry students from Bath College dry and warm when they came along with a lecturer to see the stonework as the chapel was being built. As well as smaller masonry being easier to handle, the stone would have cost less if it had been produced from smaller blocks. But as Kieran said: “Being economical is not what this is about.”

The point of the large stones is to create a monumental effect, which it successfully achieves, having the appearance almost of a huge block of limestone into which the openings have been carved. And in the case of the Diocletion windows literally were.

Williamstrip was the third Roman Catholic chapel designed by Craig Hamilton and was a continuation of his contributions to the Williamstrip Estate, where he had already extended the 17th century main house and built a freestanding bath house (housing a swimming pool and gym) in the style of a Greek temple, with which the chapel is in keeping.

The chapel is near to one of the entrances to the estate, nestled among trees. Externally, it is formed of three bays of pared-down Classicism. There is a wider central section with four stained glass windows that have load-bearing Diocletian windows above. Either side of the central section is fairly plain masonry.

Diocletion windows are not widely used, but are favoured by some Classical revivalist architects. The stonework to accommodate them at Williamstrip was completed on site. The clear glass above the stained glass windows adds a lot more natural light to the interior.

Architectural Stone hired a cottage for its masons to live in during the build, which spanned two years. There was a team of five masons working on the chapel most of the time, and others were brought in as they were needed, such as when it was decided to cut out roundels for glazing rather than having solid stone. Four more masons were brought in to cut the openings for the glass. It took them two days to complete the work.

The west (and only) entrance has a deep projecting entablature interrupted to expose the huge stones of the voussoirs.

Over the hefty bronze doors is a bas relief carving of the Annunciation taken from the work of Luca della Robbia in Florence. Between the Angel Gabriel and the Virgin Mary are, by tradition, lillies, the symbol of the Virgin.

It is a theme that recurs throughout the building, including on the doors. The chapel is dedicated to Mary, the Mother of Jesus. Mary was also the name of the client’s mother and the dedication of the chapel took place on what would have been her 100th birthday. 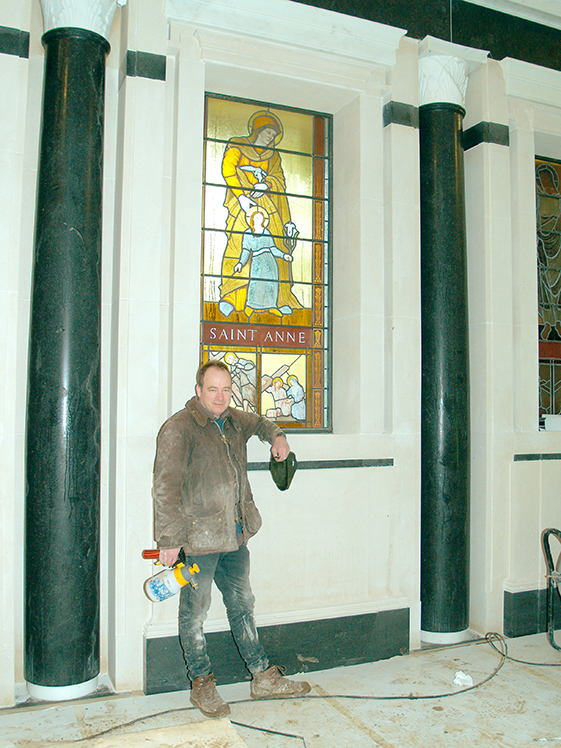 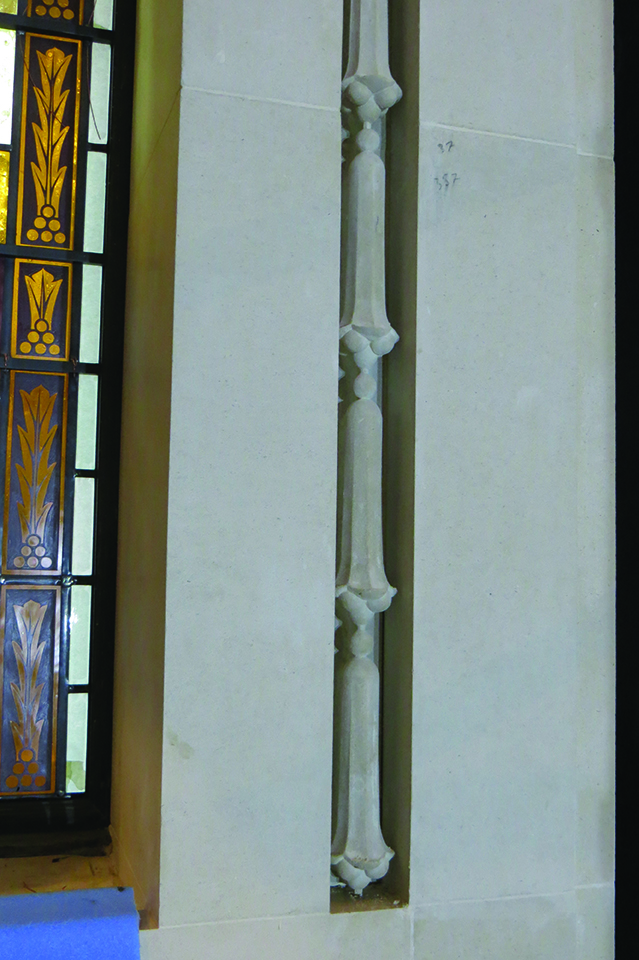 Throughout the chapel are floral drops, a feature Craig Hamilton has used before, said to be inspired by the 1914 entrance of John James Burnett’s Edward VII galleries at the British Museum. In the new chapel at Williamstrip, this theme is extended throughout the internal decoration.

Inside there are 12 Irish Blue Kilkenny stone columns 3.6m high, produced as single stone monoliths by McKeon Stone, which extracted the stone from its own quarry.

Most of the stonework was produced on CNC machines and hand finished by Architectural Stone’s masons in a sensible and beneficial collaboration between new technology and traditional masonry skills. 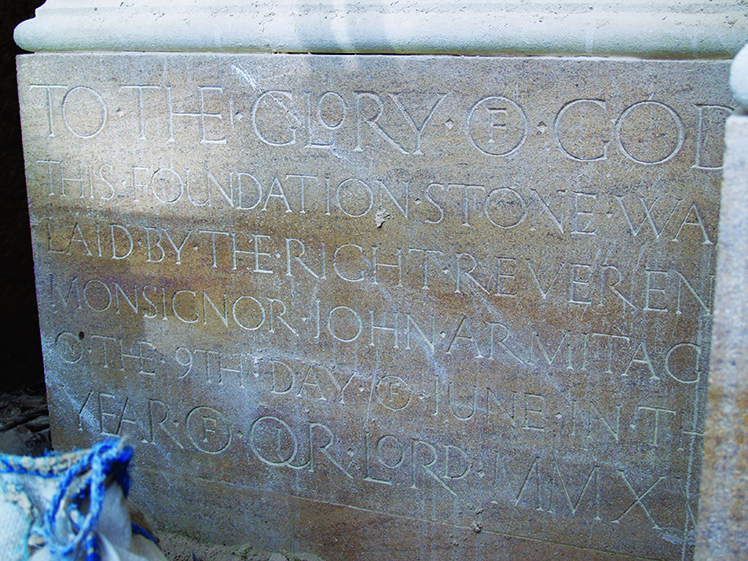 There is a foundation stone laid by the Rt Rev Monsignor John Armitage. It is part of a Clipsham stone plinth with an inscription also designed by Craig Hamilton and produced by Mossford Memorial Masons, from which Architectural Stone evolved as part of the MS (standing for Mosford Stone) Group.

The original intention had been to gritblast the inscription on to the stone but the nature of the Clipsham meant blasting was not as successful as had been hoped and in the end the letters were cut by hand. Some of Mosford’s masons also helped with laying the floor. 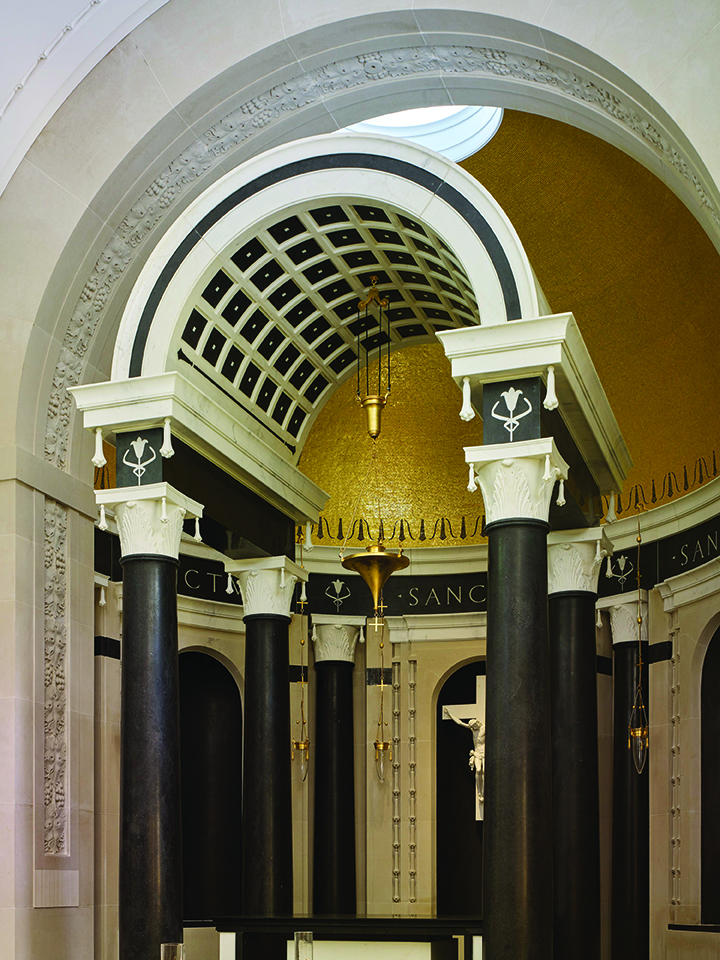 The ciborium is constructed of the Irish Blue Kilkenny limestone and Statuary marble. It was made in Italy, as was the marble altar. The arch of the ciborium weighs seven tonnes and was installed as one piece. The four Irish Blue columns supporting it and the Statuary marble capitals are post-tensioned on steel rods to support the arch above. The lily-shaped drops from the cornices and capitals here and throughout the chapel are a unique addition to the Corinthian order.

The only other steel in the building is supporting the 11 tonnes of lead on the roof laid by Conservation Leadwork of Cambridge.

The floor is Jordon’s Basebed Portland stone and Kilkenny, with the Kilkenny stone accommodating up to 5mm of expansion around the edges.

Architectural Stone was commissioned to supply, produce and construct all of the stonework for this magnificent private chapel. The stone specialist worked closely with world-renowned, award-winning architect Craig Hamilton to the exacting standards that accommodated the 2mm joints to complete the traditional load-bearing masonry.

Architectural Stone oversaw the production of all the stonework, using its modern masonry production unit in Cardiff. 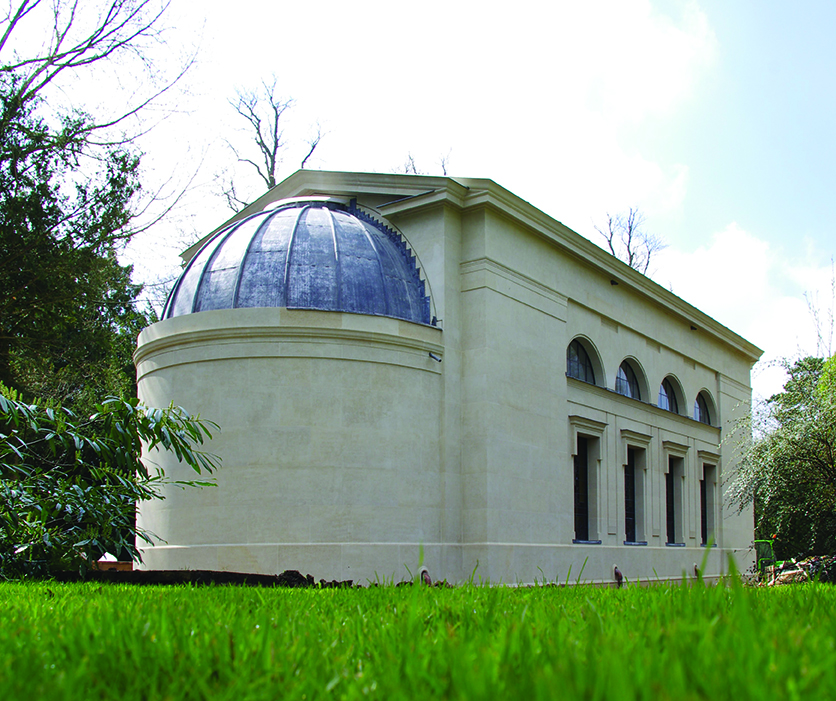 At the rear of the chapel is a curved structure created from the same natural stone as the rest of the building supporting a domed lead roof. This encloses the sanctuary.

Internally there is a large narthex arch with fine carvings and an even grander chancel arch that spans the entire width of the chapel. It is decorated with, deeply-carved grape and vine friezes, representing the Eucharist. The narthex also contains a marble font, already put to good use at the christening of one of the owners’ grandchildren. The bowl of the font is made of Connemara marble. It has a cover that was painted by the architect.

Large concave Kilkenny niches house a range of marble and bronze statues and figurines, including a bronze of St Patrick of Ireland, cast from a stone statue in a church in Wolverhampton.

The magnificent floor of Portland and Kilkenny limestone panels enhances the chapel’s interior. The technical construction included many modern and traditional stonemasonry techniques in the erection of the superstructure as well as during the installation of these technically complex internal elements.

This exquisite project serves to demonstrate Architectural Stone’s project-management ability as well as showcasing the skills of the company’s banker masons and fixing teams.