The pictures here show Irish sculptor Victor Daly with his latest work of a seal and its pup carved from Irish Blue Limestone and installed on the seafront in Bantry, West Cork.

Victor lives in rural West Cork where, he says, "everybody knows everybody", and with so few carvers left in Ireland he is often called upon to use his skills, as he was when the Bantry Tidy Town Committee decided they wanted a shoreline artwork for the town.

Victor takes up the story: "I was contacted by some ladies from the Bantry Tidy Town committee about making a piece for the town. They had the idea of seals, as seals are very common around these shores. One of the ladies actually attended a workshop at my studio, so she got a hands-on feel for carving.

"I must say without these women, who work tirelessly for their community, these sculptures might never happen. They spend all their spare time filling out forms to get funding for these projects, so hats off to them.

"Anyway, I contacted my friend Tim O’Connell from O’Connoll Stone in Crossbarry, Cork, and he knew exactly where he could source a nice piece of limestone, light enough in colour to look like the seals we have around our shores.

"I contacted a potter I know in Skibbereen to make me a model in clay for me to work off and there it began.

"During the winter, after lots of grinder cutting, pitching and punching the seals started to appear, though it was hard going as this limestone is hard, although ideal for public sculptures.

"I knew children were going to be climbing all over it, so I had to bear that in mind when making it. And I loved the idea kids could sit upon them and get photos taken, and possibly adults also.

"I looked at seals bodies very closely to see the hairs and tried to replicate that as best I could, giving them both a hair and a sleek look, knowing they look very sleek and dark when wet - another reason for choosing that stone.

"The response from the public has been great. It makes all the sore muscles worthwhile."

Victor works to commissions, producing bespoke pieces by hand using irish stone. He also teaches people the craft of carving in his workshops. He was involved in the West Cork Stone Symposium, which has unfortunately had to be postponed because of the Coronavirus pandemic, although it is hoped it will go ahead at a later date.

Below. Victor in his workshop with the seals ready to be delivered. 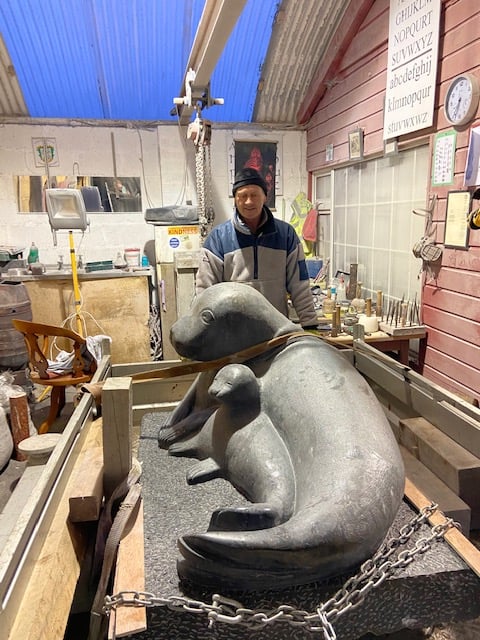