Building Limes Forum: Discovering the secrets of the past in lime and earth

Understanding how people built with stone in the past using traditional lime and earth mortars, renders and plasters is key to conservation. That was the theme of the York symposium presented by the Building Limes Forum.

Understanding of historic uses of mortars, plasters and renders continues to evolve. A few years ago it was common practice to analyse mortars on ancient buildings in detail and try to replicate them. Now conservators appreciate that a small piece of mortar used for analysis is unlikely to represent the mortar throughout a building and, certainly in the case of pointing, is not even likely to be what was originally used because it will have been replaced several times over the years by people who did not analyse the original materials.

That was one of the messages from the Traditional Mortars Symposium run by the Building Limes Forum in York, 10-12 June.

Advocates of the use of hot lime and earth mortars explained and demonstrated the advantages of the materials, although nobody at the symposium was trying to sell products.

For most of history there were no building regulations or British Standards. Tradesmen used whatever was to hand, which often meant what they could dig up out of the ground wherever they were working. Their understanding of materials was passed down through generations and learnt through experience.

As Nigel Copsey, the stonemason, building conservator and author of Hot Mixed Lime and Traditional Mortars: A Practical Guide to Their Use in Conservation and Repair, who organised the symposium, said during the event, architects think stonemasons are lazy but they are not; they are economical.

Nigel put it like this: “It’s all about getting the job done with the best materials that do what we, as masons, want them to do.

“What a lot of the experts in the 19th century say is that whatever the masons do must be wrong because masons are lazy and slovenly people... they are calling lazy what we might call efficient. We have to keep this in our heads: don’t be bullied by experts.”

Nigel believes architects and conservators have as much to learn from the trades as tradespeople have to learn from the professionals and scientists. Developing that dialogue was an underlying principle of the symposium, he said. “One of the things this is about is bringing crafts and architects together. We have to break these barriers down; they have to work together as equals – that generates a lot of positive energy.”

The first two days of the symposium involved presentations and discussions in St Anthony’s Hall, which was just as well as it rained incessantly. On the third day there were practical demonstrations at the Masons’ Lodge in the grounds of York Minster, where masons normally work producing new carvings and masonry for the Minster watched by the passing public.

The masons also have a workshop inside one of the Minster’s associated buildings, which those at the symposium were able to visited during a tour. The tour included some of the places not commonly seen by visitors, including the Mason’s Loft, where templates for masonry dating back centuries are kept and where larger restoration masonry is laid out for inspection before going into the building.

There were about 130 people at each day of the event, including architects and masons, some from as far away as North America and Asia, as well as Europe.

The mix emphasises the international dimension to conservation, including explorations of the use of traditional mortars. It was also demonstrated by case studies from the UK, Ireland, Spain and Canada.

A lot of research is led and paid for by the European Union and that was a collaboration Nigel pointedly emphasised by specifically welcoming the mainland Europeans to the symposium at its outset. He hopes those ties will not be broken by Brexit, which he says has already cost him his French apprentice because she returned to France after the result of the referendum was announced. “Most of the most practical research is done by Europe,” he says. 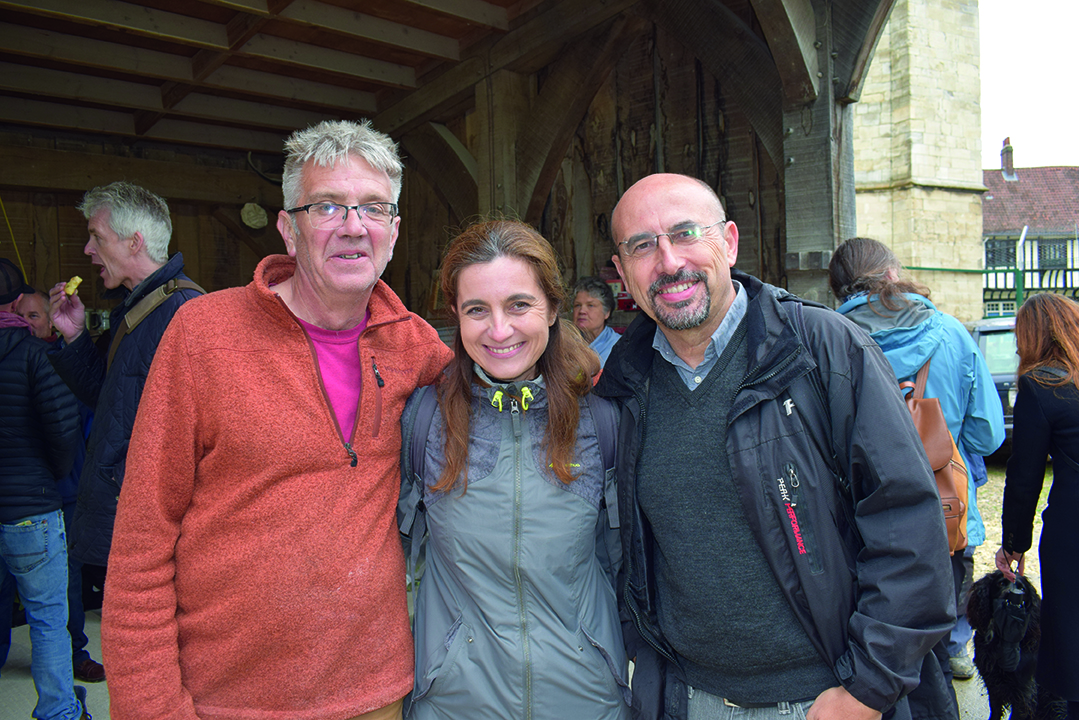 Nigel Copsey (left), who organised the Traditional Mortars Symposium in York under the auspices of the Building Limes Forum, with Fernando Vegas and Camella Mileto from the University of Valencia in Spain. Fernando and Camella spoke about the use of earth walls and gypsum plasters and floors, common in Spain, during the event.

Some of that research was explained by Fernando Vegas and Camella Mileto, architects from the University of Valencia in Spain, one of that country’s oldest universities, founded in 1499.

They spoke about the use of earth mortars, which are essentially clay dug straight out of the ground and sometimes mixed with lime or gypsum. Earth mortars can be used as a render or plaster, inside and out, as well as rammed into formers to create solid walls known as ‘tapia’ in Spanish. The famous Alhambra Palace and fortress in Granada, Andalusia, has rammed earth walls. Even the perimeter fortress walls are rammed earth on a base of stone. It was only after the Christians arrived at the Alhambra in 1492 that stone became widely used.

The mass of the earth walls helps keep the buildings cool in temperatures of up to 40ºC in summer and warm in winter when outdoor temperatures can fall to -15ºC.

Earth walls were also common in the UK, said Fernando Vegas, made in a similar way to the rammed earth walls of Spain. In Yorkshire, they are called ‘Cob’ walls.

Fernando and Camella spoke about the use of gypsum in renders, which is common in Spain but has also been used in Paris, which is where gypsum gets its name as plaster of Paris. After the Great Fire of London in 1666 it was enshrined in law that plaster of Paris be used to render buildings in London as a fire retardant. Gypsum was also commonly used for floors. In Spain it was often polished with linseed oil, although that might not have improved slip resistance.

Research by Fernando Vegas and Camella Mileto has shown that gypsum floors can be more resilient than concrete floors. However, they went out of fashion because gypsum dries quickly, which means the floor has to be laid quickly and that makes for hard work. Nevertheless, Fernando says there is a move to return to the use of it. “The concept is to learn from the past.” 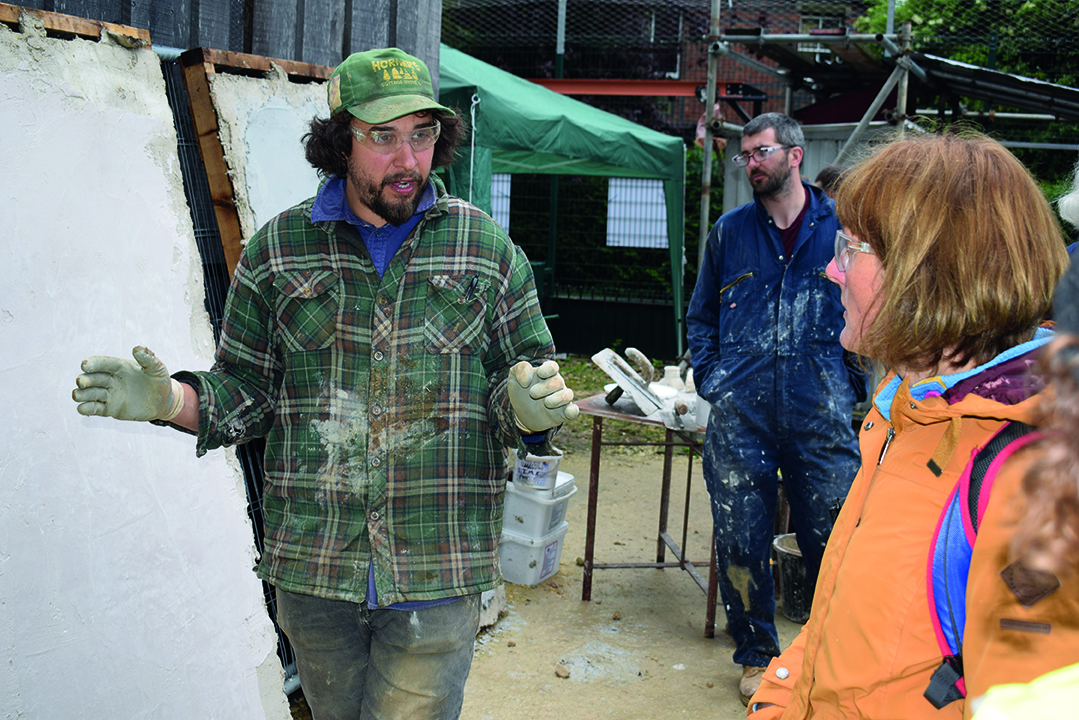 Alex Gibbons of Stick in the Mud Conservation, demonstrates the advantages of earth plasters and renders. He mixes the earth with quicklime and straw to establish it and stop it cracking as it dries.

Alex Gibbons from Stick in the Mud Conservation in the Scottish Borders specialises in clay dubbin and lime plastering, which he spoke about and demonstrated. He says most soil contains clay and can be dug up and used to make earth mortars.

He mixes it with sand and adds straw to stop it cracking. He also adds lime, which he says it is not essential but probably makes the mix stronger. For finishing plasters he uses animal hair for fibres because it is finer than straw.

Asked how much lime or fibre to add, he simply says “until it feels right” because dug earth will vary. He says he never measures anything. “People are almost trained to ignore their intuition. If it works, it’s OK. Nobody’s making money out of mud. I just want you to use it because it’s the best – and it’s the future.”

The message behind the symposium was basically that traditional mortars were used because they worked – and they still work. The move away from them came from the commercial development of alternatives such as Ordinary Portland Cement. But hard cements have accelerated the deterioration of historical buildings, as is well recorded. 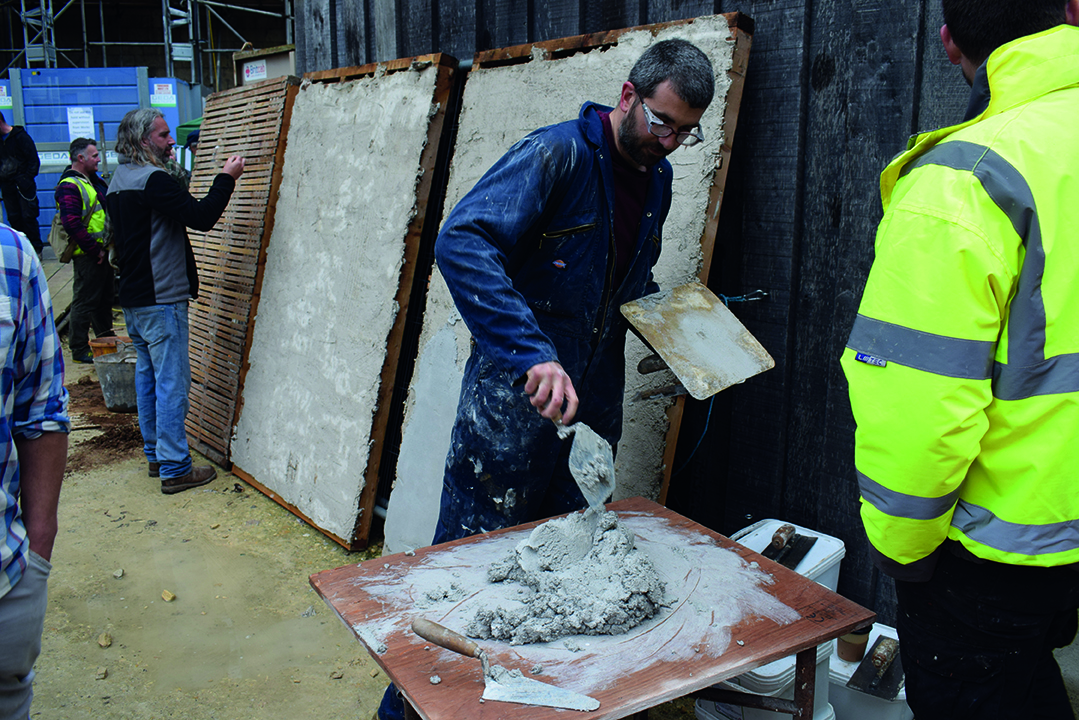 Hot lime is mixed with fibres from plants and animals to make particularly ‘sticky’ and easy to use plasters and renders that resist cracking.

Traditionally, mortars used with stone (and brick and timber) buildings were softer than the masonry, which made them sacrificial. They accommodated not just the migration of water, but also the movement that all buildings undergo. When impervious cements harder than the masonry started to be used, the relationship between masonry and mortar reversed and the masonry suffered.

Commercial interests in proprietary products and the introduction of standards and regulations favouring harder, non-porous materials created a prejudice against traditional mortars, says Nigel. It was easy to believe that harder was better, especially for those who were not actually using the products. They wanted consistent test results, which mass production delivered.

“There are very few scientific tests for mortar that are designed for lime materials, so the results give a false impression. The tests were designed for hard cement and concrete, not lime. The standards need a root and branch review because they take us in the wrong direction,” says Nigel. 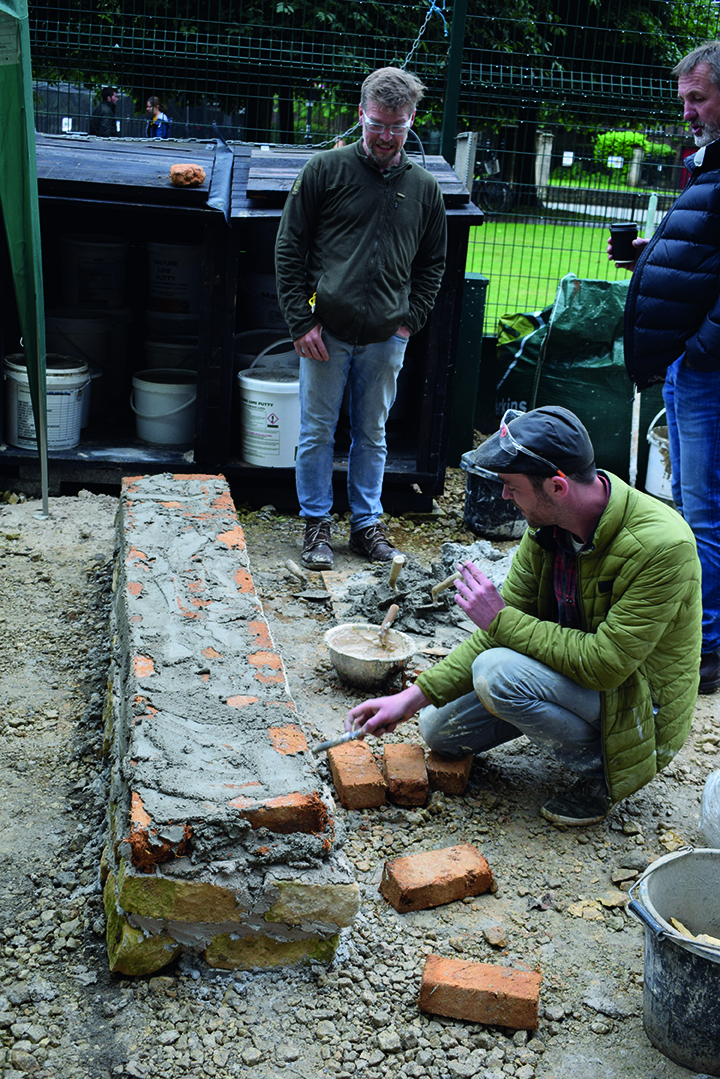 “Traditional mortars are cheap to make, efficient and cohesive. They have all the properties that masons demand. Modern materials don’t have a good bond. They don’t keep buildings dry. Just making a building impermeable doesn’t keep it dry – in fact, it makes it wet.” His point is that moisture is trapped in as well as kept out.

He says he has learnt a lot about traditional mortars from North America, where the National Institute of Standards & Technology (previously the US Bureau of Standards) has concluded that even hard cements should include lime mortars in the mix to improve its workability and bonding.

Nigel said the aim of the symposium in York was to educate, demonstrate and then get people to use traditional mortars.

Other uses of lime demonstrated in York included plastic repairs and lime washes. Nick Durham, a stone mason and carver now specialising in decorative stone conservation, demonstrated the effects natural additives can have. He added turmeric to create a bright orange lime wash, although he said the colour is temporary and the wash would return to an ochre colour as it cured.

He said he also uses casein in lime wash to give it extra strength and that lime wash is traditionally made using sea water because the salts in sea water produce a better limewash.

Casein is a phosphoprotein that comes from milk. Add it as a powder to lime and the mix becomes particularly runny, so it can be used as a paint. It also makes a good adhesive. 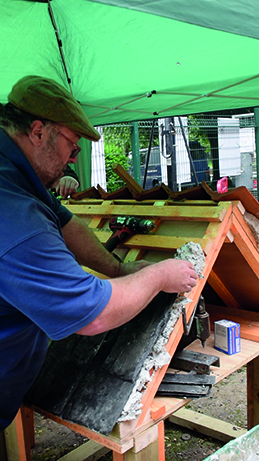 Traditional roofing specialist Richard Jordan, based in Derbyshire and working throughout the UK, demonstrated how lime mortars are used with clay and slate roofing tiles to create resilient roofs.

You can find out more about hot mixed mortars at www.hotmixedmortars.com.