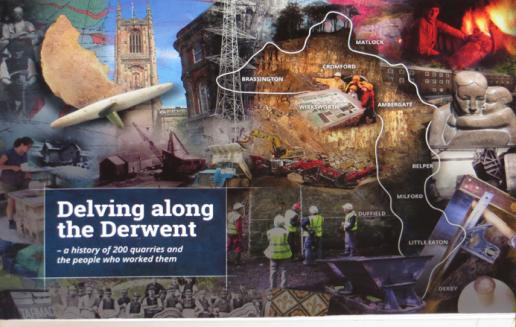 Delving Along the Derwent, a book for stone enthusiasts.

Ian Thomas, a now retired founder and director of the National Stone Centre in Wirksworth, Derbyshire, has led a team of eight in the production of a book called Delving Along the Derwent – a history of 200 quarries and the people who worked in them.

The book is the result of research undertaken over a number of years by the team that has become known as ‘the delvers’. A delve is otherwise known as a quarry, but denotes a small mineral extraction operation of the type used to extract building stone.

Ian’s interest in stone goes back to his youth and family connections with quarrying in Mansfield and Aberystwyth. He is a geology graduate of Swansea who subsequently studied cartography and has become a painter, with his work appearing in several exhibitions.

The book contains many historical and contemporary photographs, maps, plans, drawings and a few paintings.

The research and publication of the book was supported by the Heritage Lottery Fund (now the National Lottery Heritage Fund) as one of about 60 projects forming the DerwentWISE scheme initiated and administered by the Derbyshire Wildlife Trust.

Thanks to the backing having paid for the printing, copies of the book are free (at least until a reprint is required), although you are asked to make a donation to the National Stone Centre. If you would like a copy, email Ian on [email protected].