Trevor Proudfoot, who established Cliveden Conservation at the tennis courts of Cliveden Estate in Berkshire, has died of complications from pancreatic cancer. He was 65.

He was a stonemason who pioneered the adoption of traditional materials, techniques and craftsmanship in conservation. He and people who worked with him and went on to form their own conservation companies led a renaissance in traditional craft skills.

In 1979, when Trevor was working on the conservation of the 14th-century Bristol High Cross in the landscape gardens at Stourhead, in Wiltshire, his skills were noticed by David Winfield, the National Trust’s first Surveyor of Conservation, and he was appointed as the charity’s adviser for the conservation of stone and plaster.

For nearly 40 years Trevor assisted the National Trust. Among the many projects he was involved with was the renovation of Uppark House in West Sussex following a devastating fire that broke out just as earlier restoration work neared its completion. Repairing the damage took six years, concluding in 1995. The work included Trevor's restoration of intricate plasterwork throughout the house, including the ceilings, incorporating surviving fragments of original material into the new work, which Trevor insisted should be modelled freehand to reflect the verve and vitality of the original.

Trevor also worked for years on the New York University’s excavation of Aphrodisias, the Hellenistic and Roman city in Caria, now western Anatolia in Turkey.

Working with Bert Smith, now of Oxford University, over 18 seasons, and often joined by one or two of his colleagues from Cliveden Conservation, Trevor led projects to restore and conserve the North Agora (civic square), the Hadrianic Baths (dedicated to the emperor) and the Sebasteion Propylon (monumental temple gateway).

Aphrodisias was famous for its sculptors. The hills around the site are of high quality white and grey marble, distinguished by a large crystal size. Isotopic studies of the quarries, buildings and statuary showed that not only did Aphrodisias export sculptors to the Roman Empire, but raw marble as well.

Under the direction of the Site Director, Roland Smith, Professor of Classical Archaeology at Lincoln College, University of Oxford, Cliveden conserved many of the fine collection of antique statues excavated at this site.

Trevor was personally involved on aspects such as the conservation of more than 70 reliefs from the 1st century AD from a temple complex known as the Sebasteion Propylon.

Aphrodisias, like many large cities in Asia Minor, looked to Rome for the design of public buildings. But the Aphrodisias masons and carvers showed a singular, more adventurous architectural spirit, especially at the stadium, which survives today largely untouched. It has marble seating for 24,000 people.

The Sebasteion Propylon rivals any temple built to display the conquests of the Roman emperors in size and decoration.

It is more than 90m long and nearly 30m high, with all three orders of architecture represented – the first storey is Doric, the middle Ionic, and the third has smaller Corinthian half columns.

Along the facades, more than 180 reliefs illustrate the glory of Rome – Claudius conquers Britannia; Armenia is felled – and to place Aphrodisias in the thick of ancient myth, compositions of the flight from Troy and the birth of Aneas are set beside the more prosaic depictions of generals and horseman.

Trevor Proudfoot and his Cliveden Conservation colleagues trained local builders and craftsmen in the use of sculpture conservation techniques such as dowelling with stainless steel and using lime mortars for plastic repairs.

In 1991 Cliveden Conservation became independent of the National Trust and Trevor developed it as an international business with satellite workshops in Bath and Norfolk. Both National Trust and private clients benefited from this expansion.

Trevor’s talent, authority and affability made him popular with conservators, curators, architects, craftsmen and private and institutional owners of historic buildings alike.

He was born in Herne Bay, Kent, on 12 July 1954, the son of Peter Proudfoot, who ran the family printing firm, and his wife, Miriam, a hairdresser. He was educated at Vernon Holme School, Canterbury, and at Kent College before undertaking a foundation year at Exeter School of Art. He abandoned his subsequent studies at Hull College of Art to join Hannah Firmin, who later became his wife, in London. They married in 1980.

He and Hannah had two sons, Lewis and Dorian, but divorced in 1997. Lewis succeeds his father at Cliveden Conservation.

In 2002 Trevor married Laura Hebert. They had a daughter, Emily, before divorcing in 2007. And he had  daughter, Sophie, from a relationship with Julie Marsden. He is survived by his children and three sisters.

Trevor played rugby well into his 50s. He had a good sense of fun and an irreverent charm. As one of his acquaintances from his younger days once commented to NSS: “A bloody nice bloke - good world view.”

Below. Trevor Proudfoot (second from right) at Uppark receiving an award for conservation. With him (left to right) are Robert Dillon, Manager of Uppark House; Carole Milner, Head of Conservation & Collection Care at the Museums & Galleries Commission; and Peter Pearce, Land Agent for the National Trust. 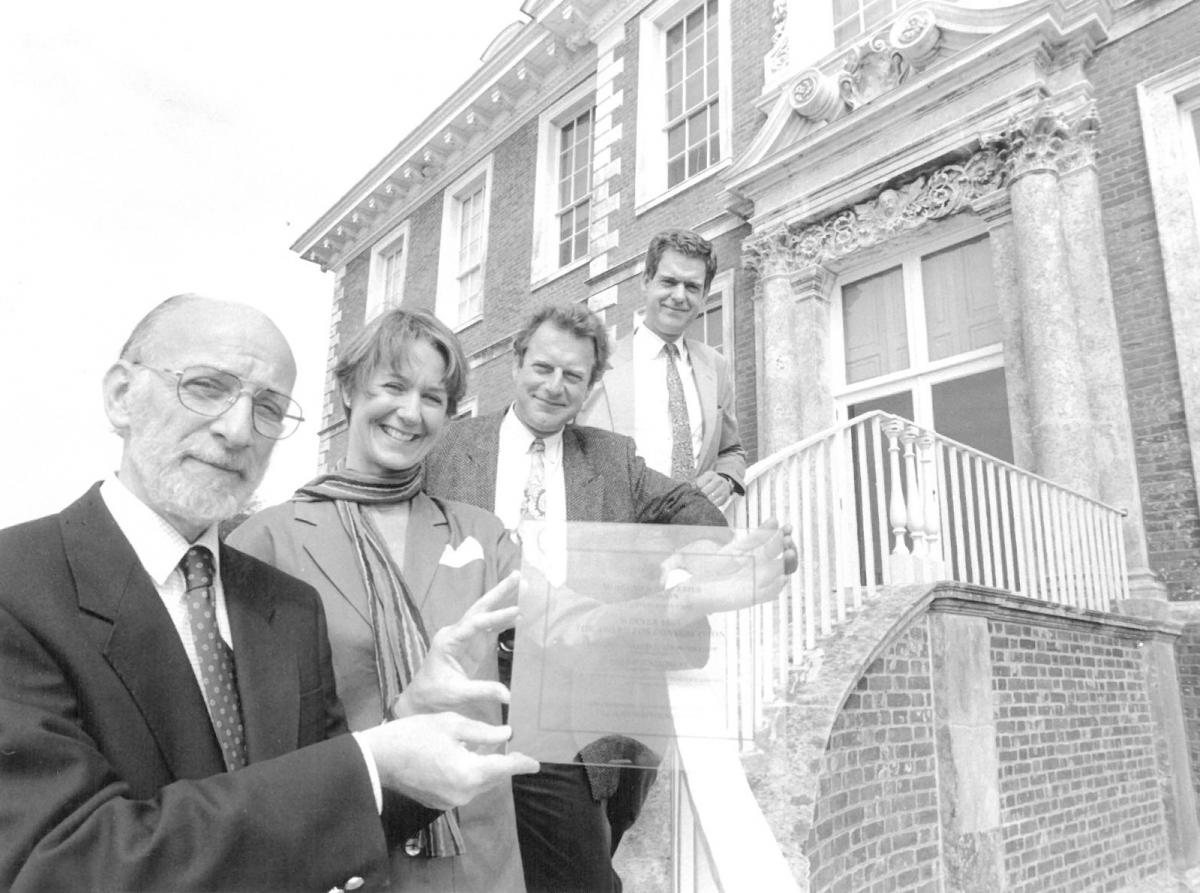