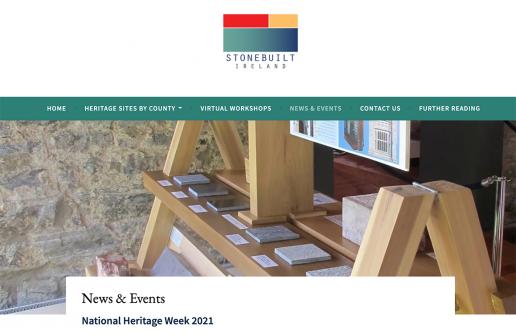 Stonebuilt Ireland is using the country's National Heritage Week 2021, which starts today (14 August), to elicit more information about the stones used to build walls in different parts of the island. Stonebuilt Ireland suggests the collecting of information can be done as a collective exercise by local heritage groups and schools, or by individuals as a Wall Game.

Although National Heritage Week is a focus to promote Stonebuilt Ireland, it is hoped it will create momentum that will see information continuing to be gathered into the future.

Boundary walls in Ireland are usually built of whatever was at hand, so tend to reflect the local underlying geology. Stonebuilt Ireland wants more information about the varieties of style of wall built and materials used for those walls.

This exercise focusses on walls in particular, although information can also be recorded of stone used for buildings, monuments, and gravestones.

So people can distinguish between different stones, Stonebuilt Ireland has produced workshop modules that can be accessed online. Modules 2a-2c identify the major stone types (igneous, sedimentary and metamorphic). Then Module 3 provides information about the Stonebuilt Ireland project.

People taking part can submit their findings to record the stone types used and, if they can find out, document where the stone was quarried and who built the walls. They are also asked to note how the stone was dressed (if at all) and the style of construction. The information gathered is used to documents features of important local heritage and fabric that is often threatened with removal, and will be particularly useful if and when walls require repair.

The Stonebuilt Ireland project is run by the Geological Survey Ireland. It started with funding from the Irish Research Council in March 2019, developing a simple database and web-based platform as well as hosting various heritage displays at various venues in Ireland. But that support came to an end in September 2020. After that, the Geological Survey Ireland signed a research collaboration agreement with Trinity College Dublin and the Office of Public Works to allow the project to run for another two years.

The aim of documenting the stone used in Ireland is to inform government agencies, building owners and conservationists of sources for suitable replacement stone in restoration work and to develop a greater awareness of geology and the built environment among the general public.

In addition to promoting citizen science and awareness of local materials, the inventory will also help property owners to comply with Part 4 of Ireland's Planning & Development Act 2000, which requires owners to conserve protected structures. It will inform local authorities in issuing Section 57 Declarations, which outline the type of work it considers would or would not materially affect the character of the structure or any element of the structure.

To find out more about Stonebuilt Ireland and National Heritage week, visit the websites below.