Stone online: Two websites that could make a difference

There are two websites that are a bit unusual and could make a difference to the stone industry in the UK. One is new. The other was launched in 2009 and is about be relaunched.

The one launched in 2009 is the Strategic Stone Study (visit it here), which is going to be relaunched as the Building Stone Database for England, possibly later this year, possibly at the Natural Stone Show in London 27-29 April 2021, says Clara Willett, Historic England's Senior Building Conservation Adviser. "We have plans to promote this online resource more widely and as part of this we are asking users to complete a short online survey which can be found here," says Clara.

The Strategic Stone Study itself, covering the whole of England, is due to be completed next month (March). There will be an update about it at the Historic England roofing conference taking place in London next week (3 March) - there will be a report in the April issue of Natural Stone Specialist magazine.

The Strategic Stone Study started as a response to the Symonds Report on the stone industry, Planning for the Supply of Natural Building and Roofing Stone in England & Wales, that was published in 2003. The report said there was no one source of what stones had been and are being extracted in the UK, nor where they had been and are being used. The Strategic Stone Study was intended to address that - which it does pretty well.

One of the aims of gathering the information, with the help of local geological societies and enthusiasts, was to try to avoid sterilising important building stone resources by allowing building development on land under which the resources lie. 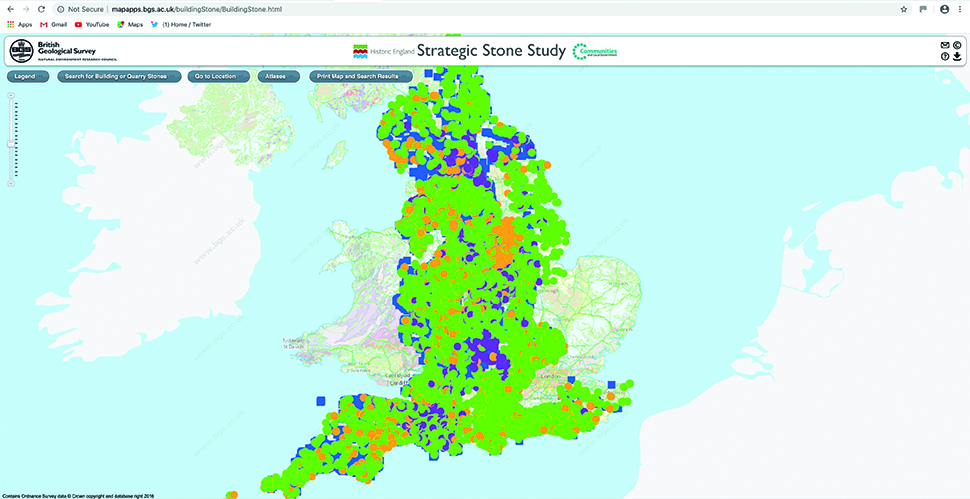 The Strategic Stone Study is to be relaunched as the Building Stone Database.

The Strategic Stone Study is a collaboration between what was at the beginning English Heritage and is now Historic England and the British Geological Survey (BGS), the BGS putting information gathered in the survey on to a Geological Information System (GIS) map that can be freely accessed online. More than £1million was made available for the project, which has included creating informative and useful atlases of building stones in the regions. These are are also available on the website.

We will publish more about the Building Stone Database as it becomes available.

The other website that could make a difference to the stone industry as well as to a broader sector of construction and society in general is the new one. It is called C-Guide and has the unusual URL of www.c.guide. It was launched in the UK just before Christmas at the Cosentino City design centre in Old Street, London.

C-Guide was launched at the Clerkenwell venue because Cosentino, which makes Silestone quartz, Dekton sintered stone and Sensa factory-sealed granite, has sponsored the website and the Spanish organisation behind it, La Fundación Arquitectura Contemporánea – The Foundation for Contemporary Architecture (www.arquitecturacontemporanea.org).

The C-Guide website was established with the aim of promoting contemporary architecture. For C-Guide's purposes ‘contemporary’ is anything, including public spaces, built since 1979. The aim is to identify and catalogue all the interesting contemporary developments in cities around the world. The first city catalogued was Los Angeles. Now there is also London. In Los Angeles 257 buildings are listed. In London there are 366.

As well as the website, it can be downloaded as an app called Global Guide to Contemporary Architecture. It is interactive and intended to be used to plan routes to visit buildings in an area you are visiting. It is hoped it will be used by the general public as well as architects for the general appreciation of contemporary architecture – “because our foundation is for architecture, not just architects,” said Rafael de la-Hoz Castanys from the Foundation at the London launch. “The City is the greatest creation of the human being,” he said. 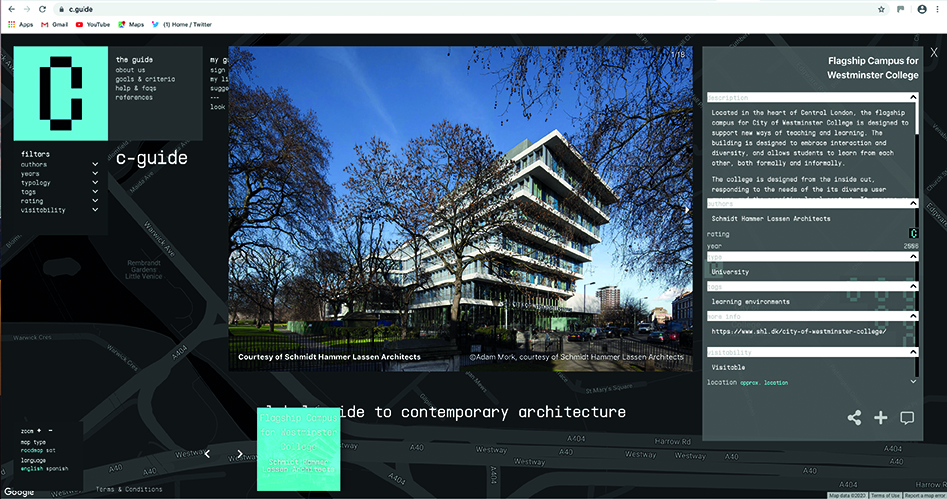 The site is not just instructive. Jorge Martin Gacia from the Foundation said in London: “We want everyone to participate and contribute.” You can do that by suggesting sites you would like to be included and by creating bespoke tours of the sites listed.

The Foundation for Contemporary Architecture was established in 2002 as an initiative of a group of architectural professionals interested in promoting contemporary architecture. The foundation is a private initiative although it has a clear commitment to the public dissemination of information about architecture, which it says has a decisive influence over the living and working conditions of everybody, so everybody should contribute to the debate about it.

The Foundation is based in Cordoba, Spain, a city that has encouraged a particular relationship with contemporary architecture. The Foundation began with the objective of supporting the work of outstanding Spanish architects by making their work known outside of Spain as well as to the home country and to contribute to a broader discussion of architecture in public and private sectors.

By organizing a series of lectures under the title of ‘Made in Spain’, the Foundation, supported by the Spanish Ministry of Education Culture & Sports in the past and now by Cosentino, has established relationships with academic and cultural institutions that share its goals.

And it has spread its wings. It’s ambitions are “without geographic limitation”, it says, as it aims to promote the broadest possible cultural debate on the architecture of today.

Contributions to the website have so far come from architects, including some particularly famous names – Foster+Partners, Frank Gehry, Donald Insall, Eric Parry Architects, Frank Lloyd-Wright, Julian Harrap Architects, Make, Quinlan Terry & Partners, Zaha Hadid Architects... in fact there are literally hundreds of them. However, neither the site nor La Fundación Arquitectura Contemporánea can be used as a way of contacting architects. “It’s not profit-making and never will be,” said Jorge Martin Gacia, “that’s why we have sponsors.”

Because the contributions come from architects, mundanities such as the materials used in the construction of the buildings listed don’t get a mention, which is a shame.