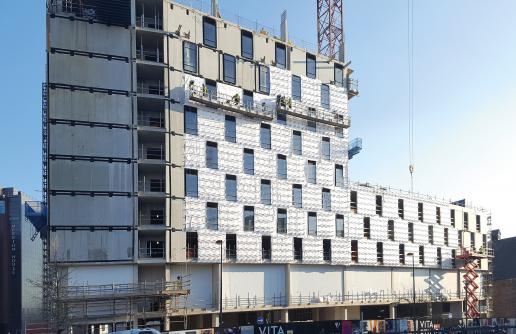 Shackerley SureClad provides the peace of mind that comes from cladding in natural and engineered stone.

With two universities, Leeds has a student population of around 38,000 and many of them choose to live in purpose-built student accommodation in the heart of the city. The latest addition for them has been provided by developer Vita Student with an A1-rated non-combustible SureClad Natural Stone façade from cladding specialist Shackerley.

The stone used is SHG Komodo KM02 limestone. It is a Portuguese limestone, white to off-white and cream with occasional, unevenly distributed pale grey / brown irregular bioclasts, fulfilling the planners requirement for cladding using a stone with character.

The Vita Student development is in the heart of the Leeds Civic Quarter, close to the Town Hall and Civic Hall, two of the Portland limestone jewels in the city’s architectural crown.

The building was originally designed and partially constructed as a hotel, but was taken over by Vita Student while the concrete frame was in progress.

Architectural and interior design practice Fuse Studios was tasked with amending the design to re-work the project to student accommodation.

The revised scheme comprises 312 studio apartments in a 16-storey building, with amenity and retail accommodation on the lower floors. Planning permission was needed for the updated design. 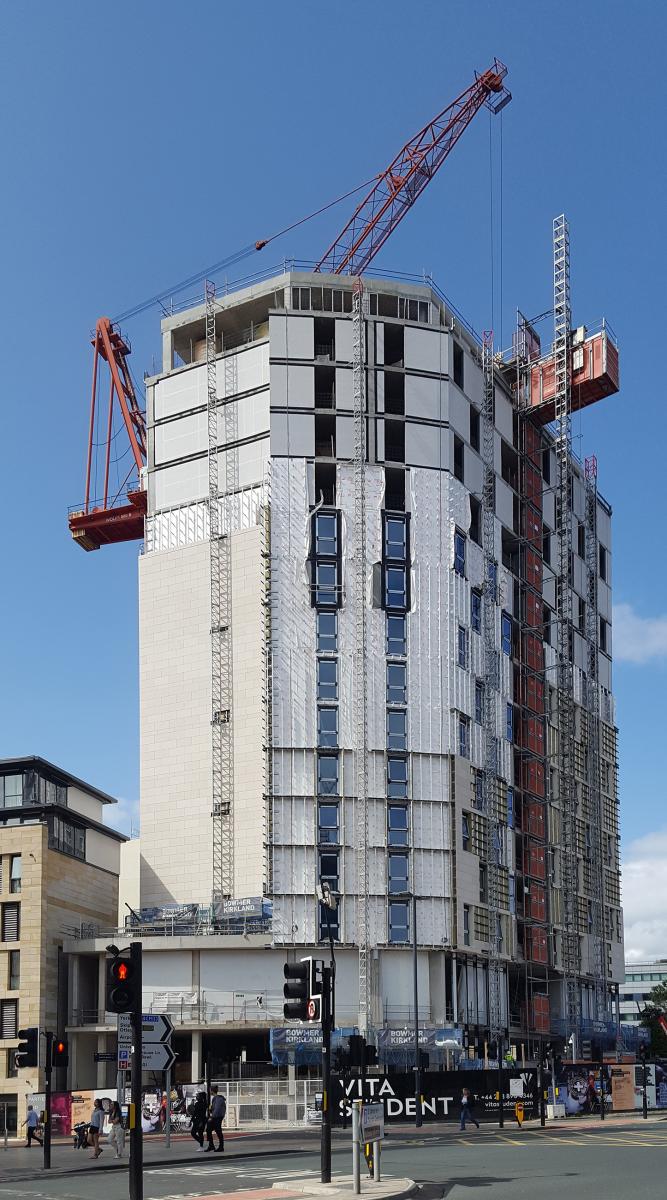 Director of Fuse Studios, Simon Clarke, explains: “The use of natural stone as the main façade material had always been a local planning aspiration because of the location of the building and its proximity to heritage landmarks. The revised design needed to adhere to this and the planners were very clear that the façade had to be genuine stone with natural colour and tonal variation, rather than a veneer or engineered stone substitute.

“Our aim was to achieve the authentic façade materiality the planners were looking for to provide the appearance, texture and quality of Portland stone, while considering the buildability, structural loading and cost implications of the façade.”

As the building was to provide residential accommodation rising more than 18m, fire safety was also an important consideration of the specification, met by Shackerley’s SureClad Natural Stone, which is classified as A1 non-combustible to BS EN 13501-1.

Having worked with rainscreen cladding specialist Shackerley on previous projects, the Fuse team approached it to discuss stone façade options for this project.

The Shackerley team was able to propose a SureClad natural limestone that complements the colour, tone and texture of the nearby buildings, without incurring the cost and consistency issues that Shackerley says can be associated with Portland stone.

To help gain approval from the developer and the local planning office, Shackerley produced sample panels at one of the company’s ISO 9001 accredited factories in Lancashire and façade installation specialist Keyclad constructed a 3m x 4.5m section of wall on site in Leeds.

The sample panel demonstrated what the limestone material would look like in situ and how four standard sizes would be used to create variation.

The client and the planning officers were also able to inspect the quality of the SureClad Natural Stone cladding system, with its panels of 20mm thick solid limestone, supplied in four standard large format sizes, along with more than 30 additional panel sizes to fit between windows.

Simon Clarke: “Constructing such a large area of façade on site enabled everyone to see how the SureClad panels would look on the finished building, which highlighted how well they fit in the architectural context and provided a taster of the interplay with light and public realm surroundings that would be achieved by the finished building.

“The sample wall area also demonstrated that although the panels are slim and lightweight, they are high quality and robust, offering a long-lasting solution with an enduring natural stone aesthetic.”

To contrast with the light beige of the main panels, Fuse Studios also selected a black granite for the lower floors in a honed finish, which again emphasises the natural source of the material.

Simon Clarke: “The use of the dark SureClad granite system along with extensive glazing at the lower levels establishes a visual separation between the student amenity space and the residential accommodation above. The contrast also creates an optical illusion of the limestone façades ‘floating’ above a void, which draws attention to the lighter coloured stone.”

The SureClad panels for both the limestone and the granite sections of the façade were manufactured to order at one of Shackerley’s Lancashire factories, with phased production aligned to the installation schedule.

Keyclad worked closely with the team at Shackerley to ensure the right product was on site as required throughout the tight programme. Peter O’Brien, Contracts Manager at Keyclad, says: “In such a busy city centre location, site storage and deliveries were limited, so it was essential that we had the right panels each week to keep the programme on track. Shackerley manufactured the panels and stored them for us, so we were able to call off the consignments we needed a week ahead of time and have them delivered to site on a just-in-time basis.” 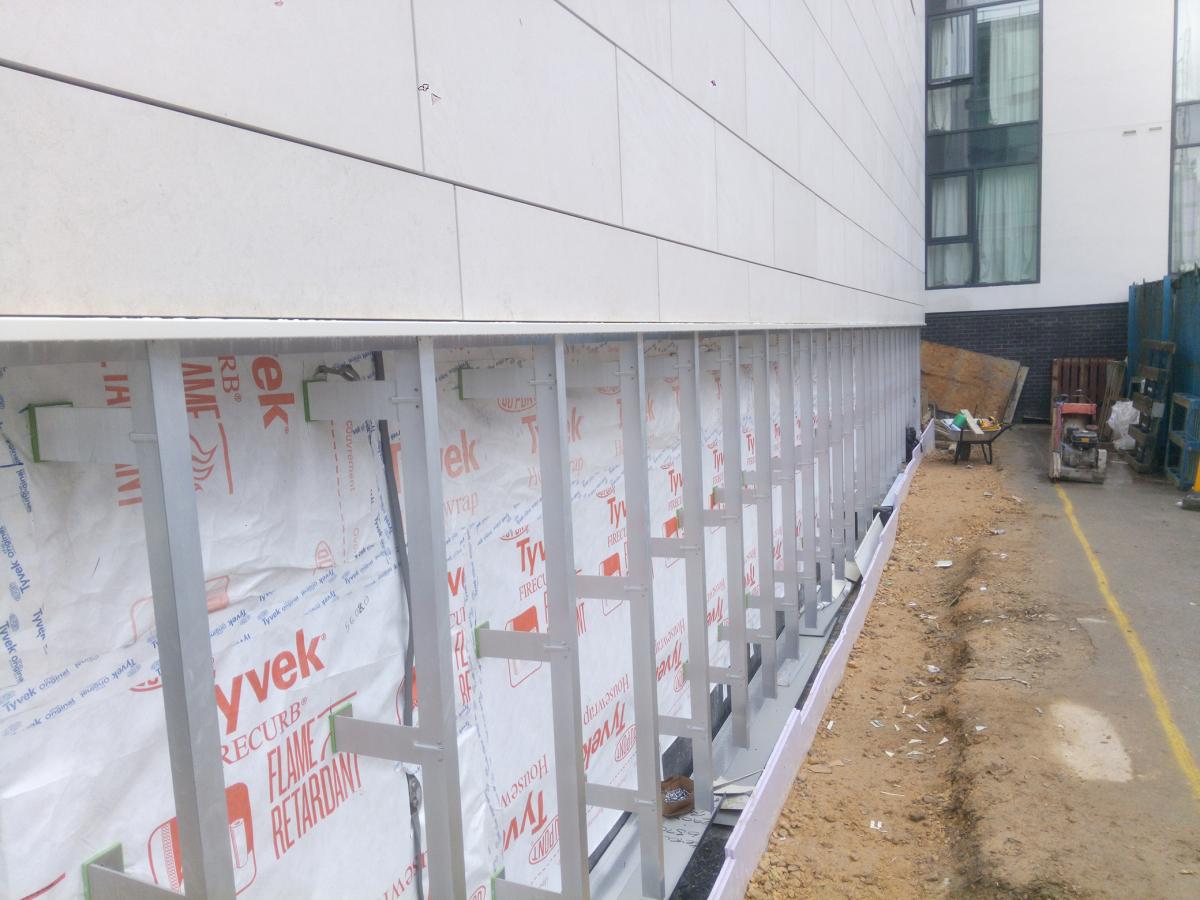 Keyclad used Shackerley’s Queen’s Award-winning SureClad Access installation system for the project, which helped the team to manage the programme with non-sequential installation.

Peter O’Brien: “We used mast climbers to carry out the installation and were able to work around them, returning to the mast climber positions to complete the façade in these areas once they had been removed. The whole thing ran very smoothly, helped by excellent communication and efficient systems from Shackerley.”

With its distinctive shape and stone façade in a prominent central location, the Vita Student development in Leeds has created a new landmark for the city.

In total, 3,924m2 of SureClad Natural Stone were used to create the façade, along with 125m2 of honed black granite panels. The project builds on Shackerley’s wide ranging portfolio in the student accommodation sector, which includes a previous Vita Student project in Edinburgh. 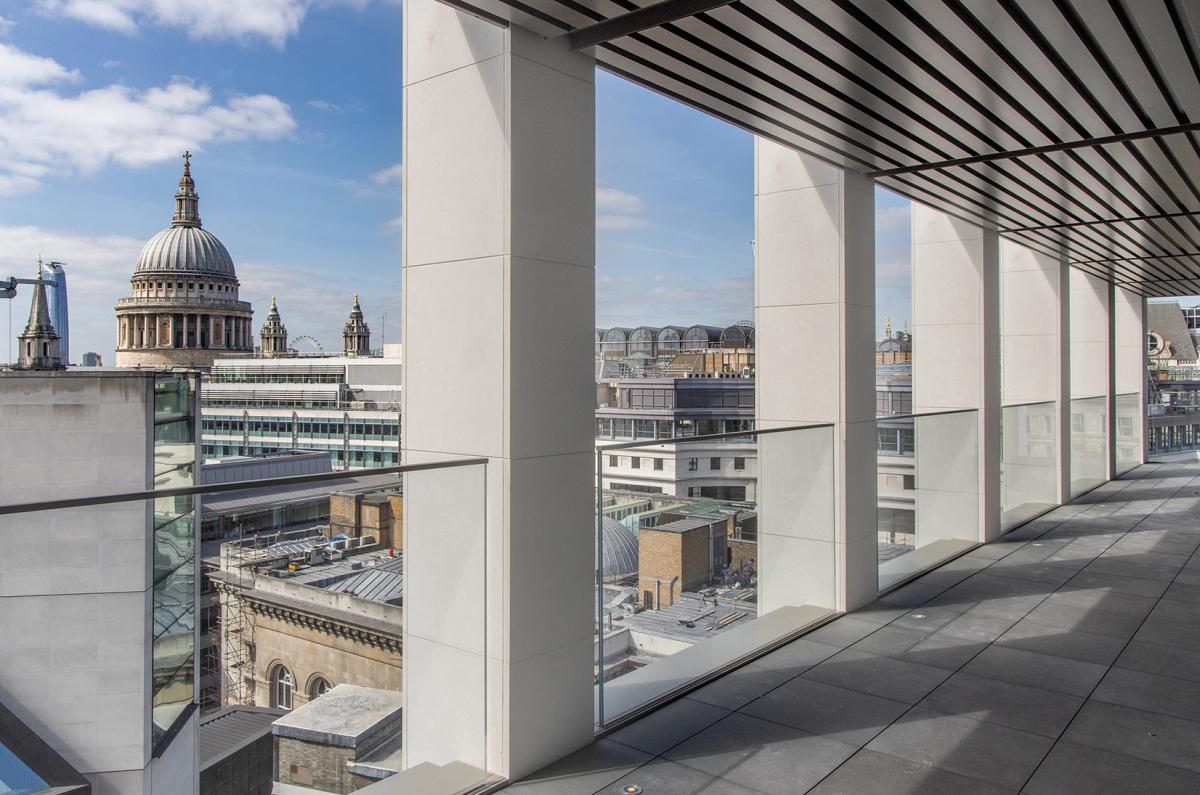 At Gresham St Paul’s on Gresham Street in London EC2, Shackerley was involved in a £50million transformation by Mace designed by architectural practice Wilkinson Eyre. The project has maximised the building’s net internal area with extensive remodelling and added a three-storey extension at roof level, which is where the Shackerley SureClad was used.

The existing Portland limestone façade was retained and simplified with aluminium in-fill panels, and the architect needed to find a cladding material for the additional storeys that would reference the material of the existing building and answer planning requirements.

The cladding system for the new storeys had to work within the loading parameters of the original structure and offer a viable solution for the buildability challenges of working at height on a confined site in the City.

Gresham St Paul’s was built 22 years ago. Its transformation has created  contemporary Cat A office accommodation, effectively creating a new building within the existing shell, as Tzi Leung from Wilkinson Eyre puts it. Improvements in thermal performance have resulted in a BREEAM ‘Excellent’ rating.

Using Portland stone for the three upper storey extension was ruled out early on. Tzi Leung says it would have been problematic in terms of structural loading and buildability. 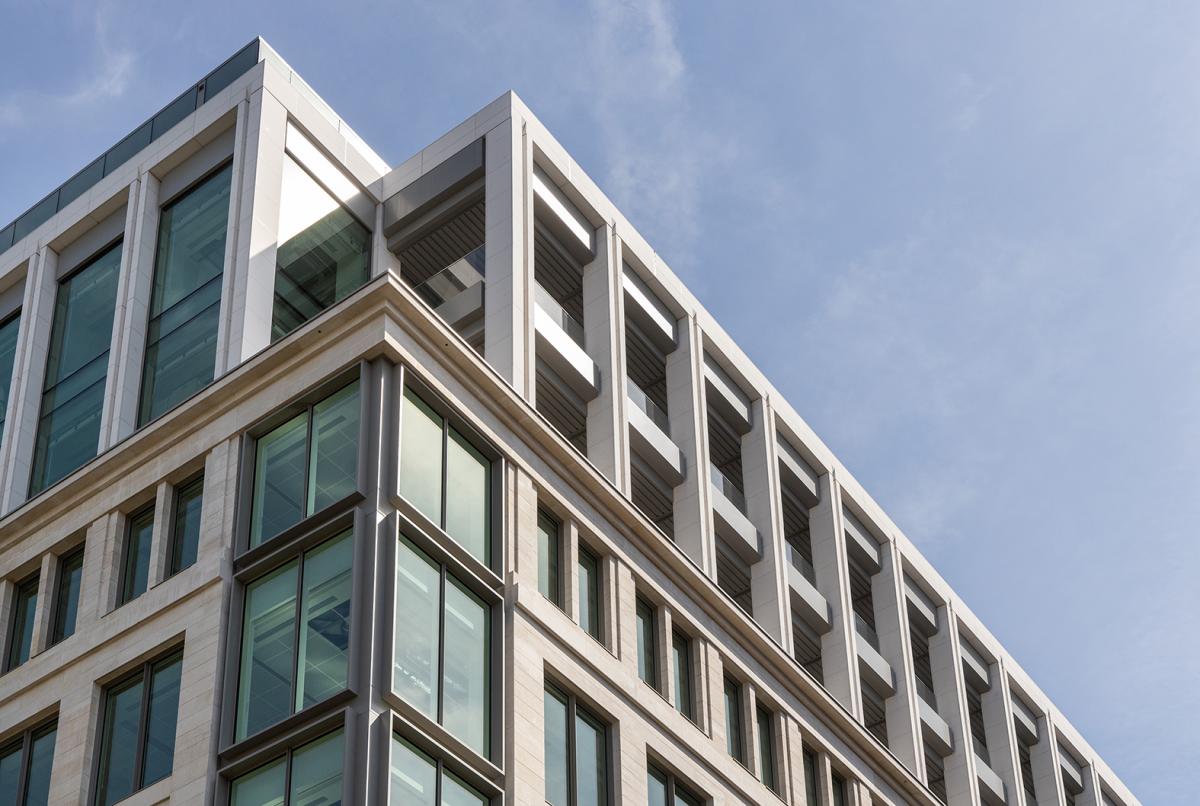 “The additional storeys were constructed using the building’s original foundations, so we needed a lightweight structure and a façade system for the extension compatible with a lighter frame.”

However, the stone aesthetic was needed to meet planning requirements. Several alternatives were assessed against criteria of look and feel, cost, fire safety, weathering, green credentials and mechanical suitability.

The design team examined various reference projects to inform their decisions about Gresham St Paul’s. One of the reference projects was Axtell House, an office building in Soho where Shackerley’s SureClad system with engineered stone had been used to add additional storeys to co-ordinate with the Portland stone of the original building.

Tzi Leung says: “Shackerley’s SureClad Engineered Stone system scored well against all our assessment criteria. Robust and lightweight, it is fire tested and certified as A2/S1-D0 in line with BS EN 13501-1. The creamy beige Valpolicella engineered stone with white variegation we selected from Shackerley’s extensive range provided an ideal match for the existing Portland stone façade and the sandblasted finish created the right aesthetic for the project.”

The large format SureClad panels that Shackerley produces at its ISO 9001 certified production plant in Lancashire was also a plus.

Initially, the plan was to send panels to GIG Fassaden in Austria. It had designed the cladding modules and had intended to make them in Austria, delivering them on a just-in-time basis to the project. 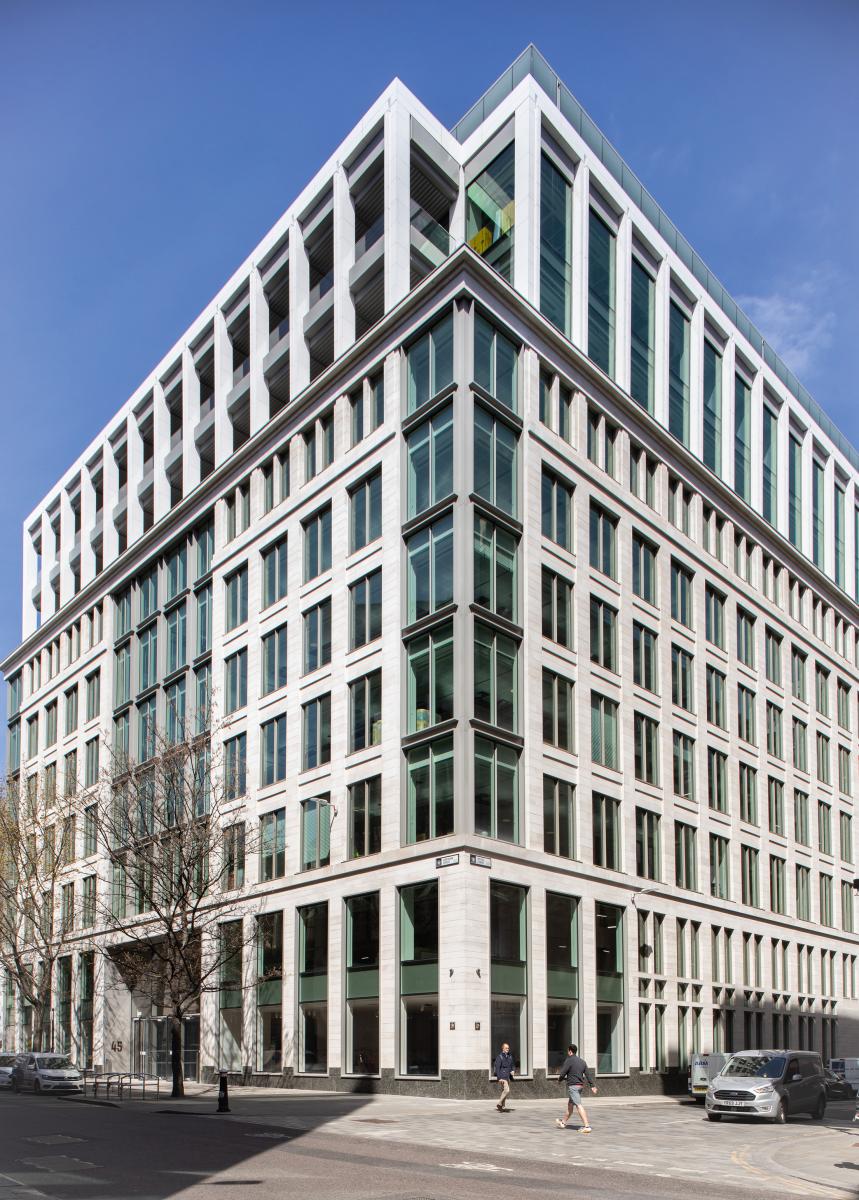 Thomas Thaller from GIG Fassaden says: “It soon became clear from working with Shackerley, however, that the company had the technical expertise and manufacturing capabilities to fabricate the modular units to our design. This provided an ideal solution that fits with the sustainability goals of the project by reducing embedded carbon, while allowing close co-ordination of each aspect of the fabrication in a single, quality-assured factory.”

The panels were then secured to an aluminium frame designed and supplied by GIG Fassaden. This created 4m columns each with 35 sections of engineered stone, including front panels and side returns.

It was technically complex and Shackerley worked with GIG Fassenden to produced a sample to trial the solution and provide an accurate costing for both materials and fabrication.

The bracketry for the system was designed and manufactured by GIG Fassaden and fixed to the building. When each SureClad module arrived on site it was craned into position and bolted on to the substructure.

Thomas Thaller: “Carrying out the installation in this way meant that all the complexities of the detailing were pre-installed by Shackerley’s experienced team in their factory, avoiding unnecessary work at height on site and saving time on the programme.

Carrying out the installation in this way also avoided the need for a scaffold, which added to the time and cost savings of the modular approach.

Thomas Thaller: “It was a strategy that relied on close co-operation between delivery partners and the technical expertise within Shackerley, who were proactive in collaborating with us to ensure the system worked well and was delivered to site aligned to programme requirements.”

Shackerley is the first cladding supplier in the UK to develop an anti-fragmentation meshing process certified as Class A1 to BS EN 13501-1 for fire safety. Shackerley’s SureClad mesh-backed Ceramic Granite and Natural Stone façade panels are now all classed as A1 for fire safety.

The company’s meshing process and its SureClad Engineered Stone system were already certified as Class A2-s1-d0 when tested to BS EN13501-1, which also complies with cladding legislation for high-rise residential buildings. But with the development of the new A1-certified meshing system, Shackerley can now offer specifiers an entire A1 system across its SureClad Ceramic Granite and Natural Stone ranges.