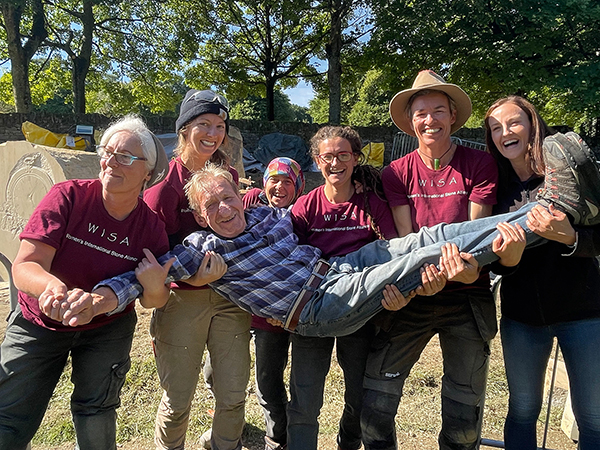 The BBC’s Look North regional news programme was on hand to record the members of the Women’s International Stone Alliance (WISA) as they constructed a monument at Shibden Hall Estate in Halifax to celebrate the life of Anne Lister.

Anne Lister was the early 19th century diarist, industrialist and landowner whose life inspired the global hit BBC/HBO TV series, Gentleman Jack, much of which was recorded at Shibden Hall and park.

Women stoneworkers from the UK, Australia, Italy, Ireland and the USA finished constructing their dry stone walling monument with carved monoliths, which include inscriptions from Anne Lister’s diaries, this month (September).

Traditional Stone employs five women, and one of them, Emma Hudson, the company’s General Manager, said: “This is a tremendous project to be involved with and we are delighted to donate the raw materials that the WISA team need to create this unique monument.

“It is so important to encourage women and girls to get into the natural stone trades and hopefully more will be inspired to explore a career path and seek training in our sector when they see the skill and creativity on show at Shibden Hall.”

Calderdale Council added its support by transporting the stone to Shibden Hall and preparing the site for the work.

During the building of the monument, WISA also held stone carving and dry stone walling workshops for women at Shibden Hall. The first was on the weekend of 20-21 August and proved so over-subscribed for the walling that another was held on 3-4 September.

WISA is an international network of women keen to work with and support other women involved or interested in traditional stone trades.

WISA member Emma Knowles headed the project and the workshops. Emma comes from Yorkshire originally and is a member of the Dry Stone Walling Association (DSWA) headquartered in Cumbria, although she now lives in Australia where she runs a company called Stone of Arc.

WISA has been working with dry stone walling Master Craftsman and accomplished designer David Griffiths to create a portfolio of edifices incorporating intimate spaces that challenge perspectives and celebrate the strengths and capabilities of women in a culturally specific way.

These edifices are being built around the world by WISA teams, initially in England, Australia, Ireland, the USA and Italy. As Emma Knowles says in a contribution to the DSWA Waller & Dyker magazine, this will give women a rare opportunity to travel and work with other women within the traditional stone trades.

The monument to Anne Lister, which creates a communal area for the public, is one of the edifices.

Antony Harris at Traditional Stone says: “With the dimensional natural stone industry being male dominated for centuries, Gentleman Jack being a great BBC success worldwide and our Lionesses winning the European Cup, I don’t think the timing could be any better.”

Emma Knowles said: “There are so few women working in the stone industry and this is why we want to do everything we can to encourage more to get involved and support them through our network.

“We are thrilled to have been invited to create the new monument at Shibden Hall to celebrate Anne Lister, who wasn’t afraid to challenge convention and show that women can excel in male-dominated professions.

“And a big thank you to David Griffiths, Calderdale Council, Simon Lumb and Traditional Stone – without their support we would never have been able to build this unique monument.”