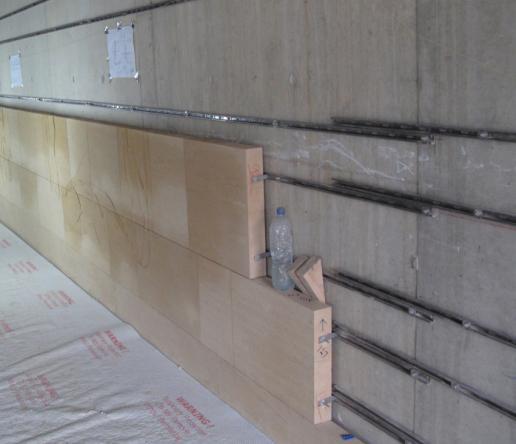 The revised edition of BS 8298 on the use of stone for cladding has been published. It makes designing in stone easier and safer.

BS 8298: Code of Practice for the Design & Installation of Natural Stone Cladding & Lining, has been updated, a decade after it was previously amended.

It has been one of the most useful standards for natural stone since it was first developed in 1989 from a Stone Federation Great Britain code of practice. Stone Federation members have also been involved in the latest changes.

The 2010 revision broke the one standard into what was intended to be five parts, although a section on internal cladding was never produced.

It has now been cut back to three parts, parts 2, 3 & 4, covering, respectively, hand setting, stone on precast, and rainscreens.

With continuing advancements in cladding practice, notably for part 4, and the changing requirements brought about as a result, this latest update was overdue by the time it arrived on 17 December.

The revised edition is both more proscriptive and more useful in ensuring stone used will perform as required, with tables to help with translating test results into safety factors required for thickness and size of panels, for example. There are also more explanatory diagrams that make the standard easier to understand.

The result is that desirable mixture of making sure stone is being used properly without putting clients off using it at all.

It should offer greater flexibility in the design of stone cladding and a greater comfort factor in knowing that the stone is being used safely.

The standard requires more testing to ensure the stone actually being used lives up to the quality promised and requires that at an early stage in the design process the structural engineer and architect will set out and agree with those selecting and designing the cladding and its fixing the functional requirements governing design principles and maximum movement allowances.

The standard is a code of practice and does not have to be used, but it is like insurance, the potential consequences of not having it are scary if anything does go wrong.

For major specialist stone contractors the changes to the standard will probably make little difference as they are already working to the highest standards. It is at the next level down where the greatest benefits are likely to occur and it might help clients and architects to understand why they would be well advised to resist the temptation to employ cut-price contractors.

The suite of standards set out the testing required, the sampling regimes to be followed, and the provision of the Declaration of Performance and UKCA Marking (which has replaced the European CE Mark, although the CE Mark remains acceptable until the end of this year). The standards also provide guidance for working practices in production and on site.

There will be more about the revised BS 8298 in the next issue of Natural Stone Specialist magazine. Don’t miss out: click here to subscribe.