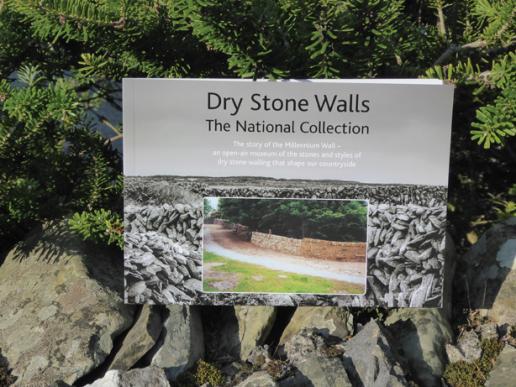 Twenty years on and the Dry Stone Walling Association has re-printed its Millennium Wall commemorative book.

Twenty years ago we were all relieved to have survived the ‘millennium bug’, which turned out to be a damp squib, unlike the current bug.

There were all sorts of celebrations and commemorations to mark the end of the nineteen hundreds  and the start of the twenty hundreds (or two thousands, if you prefer the inconsistency).

Among them was the building of the Millennium Wall at the National Stone Centre in Derbyshire.

Built by members of the Dry Stone Walling Association (DSWA) during the May Day bank holiday in 2000, the Millennium Wall is a record of various styles of dry stone walling from around the United Kingdon, each style using the appropriate stones of the region from which the style comes.

Along with the wall, a book was published with the title of Dry Stone Walls – the National Collection. And it has now been re-published with a bright new cover to celebrate the 20th anniversary of the Millennium Wall.

The wall still stands as an open air museum exhibit of the stones and styles of dry stone walling that shape the countryside of the British Isles.

The members of the DSWA who built the wall represented the regional branches of the organisation, with an air of regional pride and an element of friendly competition ensuring each team built the finest example it could of the style of wall it was demonstrating.

Each of the DSWA branches sourced 10 tonnes of its local stone and organised the transportation of it to the National Stone Centre, which is on a 40-acre Site of Special Scientific Interest (SSSI) formed of six former limestone quarries in the heart of the Derbyshire Dales on the edge of the Peak District National Park.

Each of the DSWA branches recuited  volunteers to build a 6m section of wall.

Twenty years on and the site is still a popular destination for locals and visitors alike.

Interpretation panels identify each section of wall, including the stone used and any special features to look out for in the section.

As you probably should not visit the National Stone Centre to see the Millennium Wall itself while we are still in lockdown from Covid-19, you can instead explore the wall by getting a copy of the re-printed 20th anniversary commemorative book from www.dswa.org.uk for the ridiculously low price of just  £5.50 (including UK postage).