Stone Drawing. That is what Susanna Heron calls her work of art for the new library at the 17th century St John's College, Oxford.

The college appointed Susanna in 2014 to work with Wright & Wright Architects on a work of art for the new library and study centre at the College. Having come up with a concept, Susanna needed to find someone who could turn the monumental size work into reality. She knew who to turn to because she had worked with stoneCIRCLE in Basingstone before.

Stone Drawing is the result and was installed last year by specialist contractor Szerelmey. It is a shallow carved stone relief in Clipsham limestone, the same stone used in the old university buildings of Oxford. The stone comes from Stamford Stone in Lincolnshire, a company that now claims exclusivity on Clipsham stone.

The work covers both external and internal faces of the west side of the new library and study centre.

The original 17th century St John’s College library is in Canterbury Quadrangle, one of the great Baroque architectural quadrangles in Oxford, and the new building joins on to it. 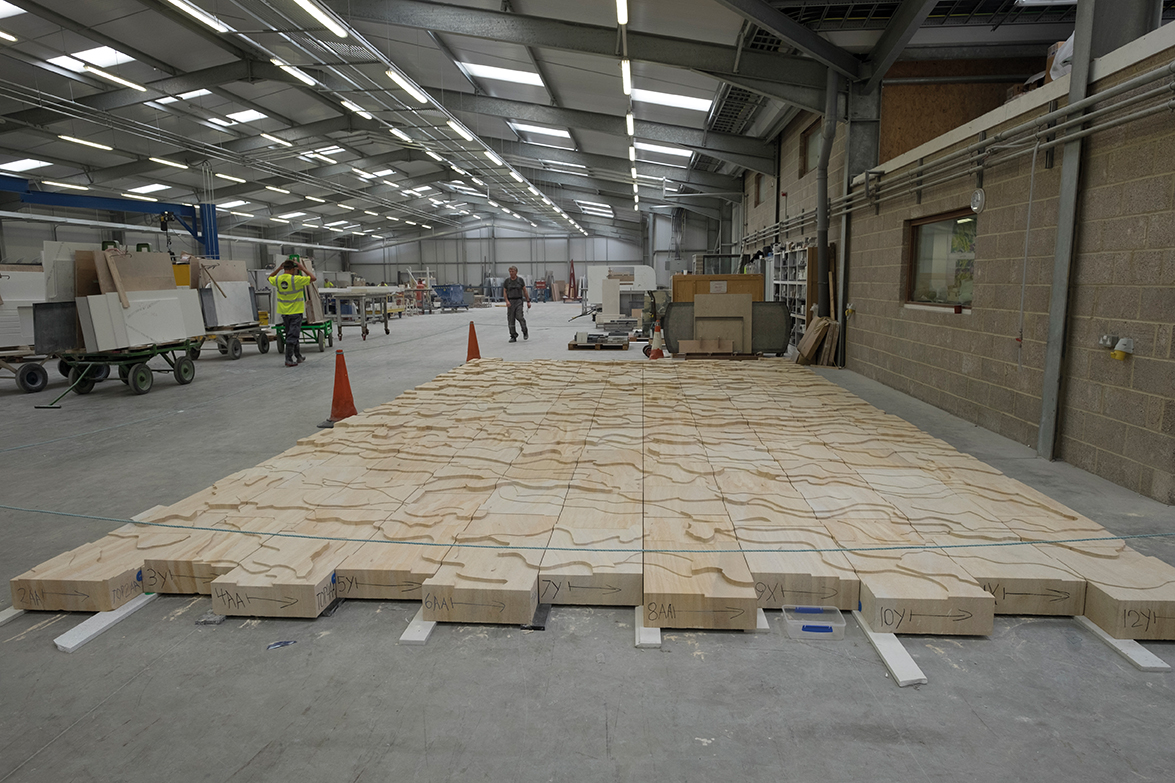 The artwork is laid out in the stoneCIRCLE workshops.

At the outset, Susanna visited the quarry where the stone was sourced to give her a better understanding of the formation of the stone in the landscape and a feeling for the way it was likely to behave during cutting and how it would weather over time. Samples of the artwork were made with the stonemasons at stoneCIRCLE to determine the depth of cutting and the finish required.

Susanna: "In the studio I think about the work by making drawings. These sketches are quite abstract, enabling me to get a pace and sense of scale, so that when I am drawing it is in the knowledge of the actual size.

"The work becomes embedded in my imagination over a long period of time and a body of works emerges around the commission.

"These drawings are characterised by the need to make edges that will translate as cuts. In this way they bear a resemblance to woodcuts and engravings and are often mistaken for prints. 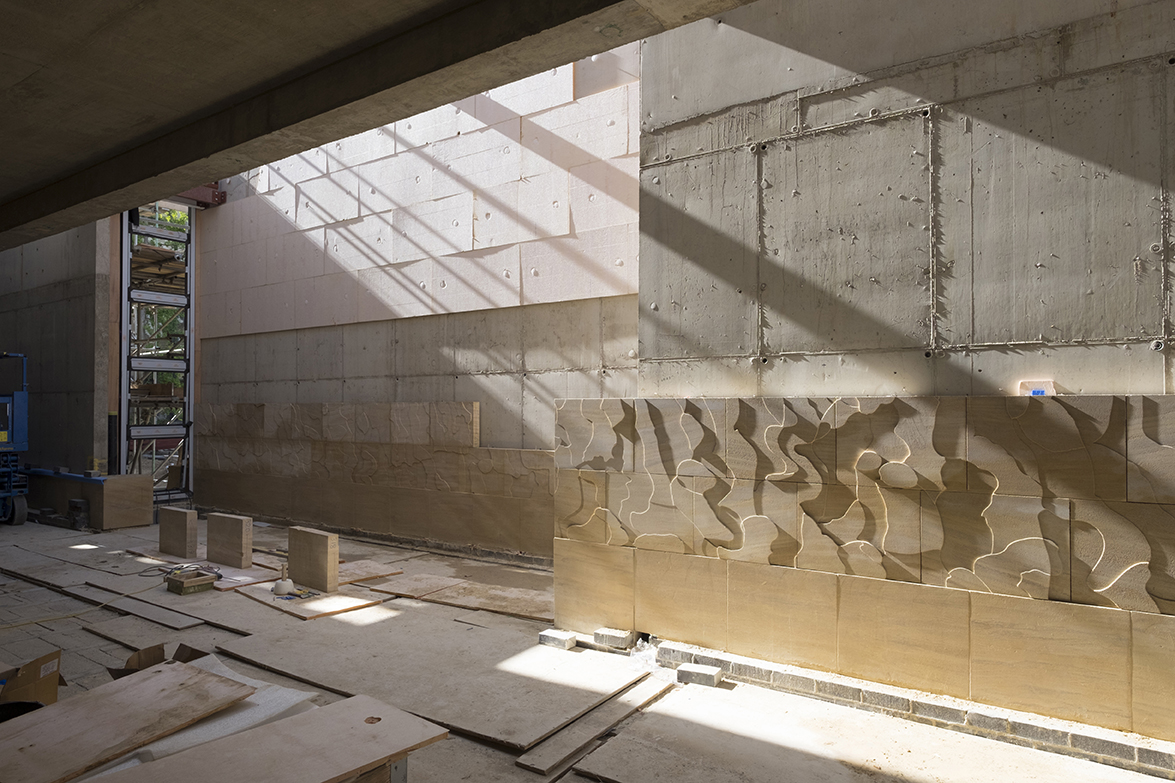 "Once the drawing is made, the levels of relief are established by making a model. I gradually remove layers to visualise the relief, making edges to catch the light and form shadows, drawing out the composition from a jumble of lines. Some lines are removed in the process. The way that the relief crosses the joints between stone blocks also affects the position of the line, so it is essential the layout of stone is established from the very beginning and remains un-changed.

"The levels can then be put on the drawing for stone cutting. The joint governs the position of the stone so that the line of relief follows through and can be pointed, which can only be achieved because the stone has been cut to such a precise tolerance."

Stone Drawing started as a drawing of abstract, hand-painted lines densely painted to form a rectangle. For the negative relief the hand-drawn lines have been cut as edges of shapes at various depths to allow for a flow across the surface and retain the original energy of the drawing, especially where sunlight plays an active role in animating the drawing in stone relief.

As the stone is on an east-west axis, sunlight can catch the edges and cast ever changing unexpected shadows.

The carved external wall is 6m high and 17.4m long. It has three overlapping sections, stepped and separated by windows in the reveals.

For the exterior relief, Susanna took into consideration the way that rain might be directed over the relief, with the idea that weathering would gradually adapt the line of the carving. This consideration created a drawing of waterflow and light. Further reflections are to be seen in a pool of water at the base, which will reflect the carving and throw light up the wall and into the interior.

The carved stone relief on the interior walls of the library is not as deep but is a mirror image of the exterior. It measures the same 17.4m long but with a reduced height of 3.7m.

There are 772 stones in the artwork. The average dimension is 600mm x 450mm with depths ranging from 100mm to 160mm.  StoneCIRCLE carved reliefs on to 290 of the stones that have a total surface area of 160m². The carving varies between 20mm and 60mm in depth. 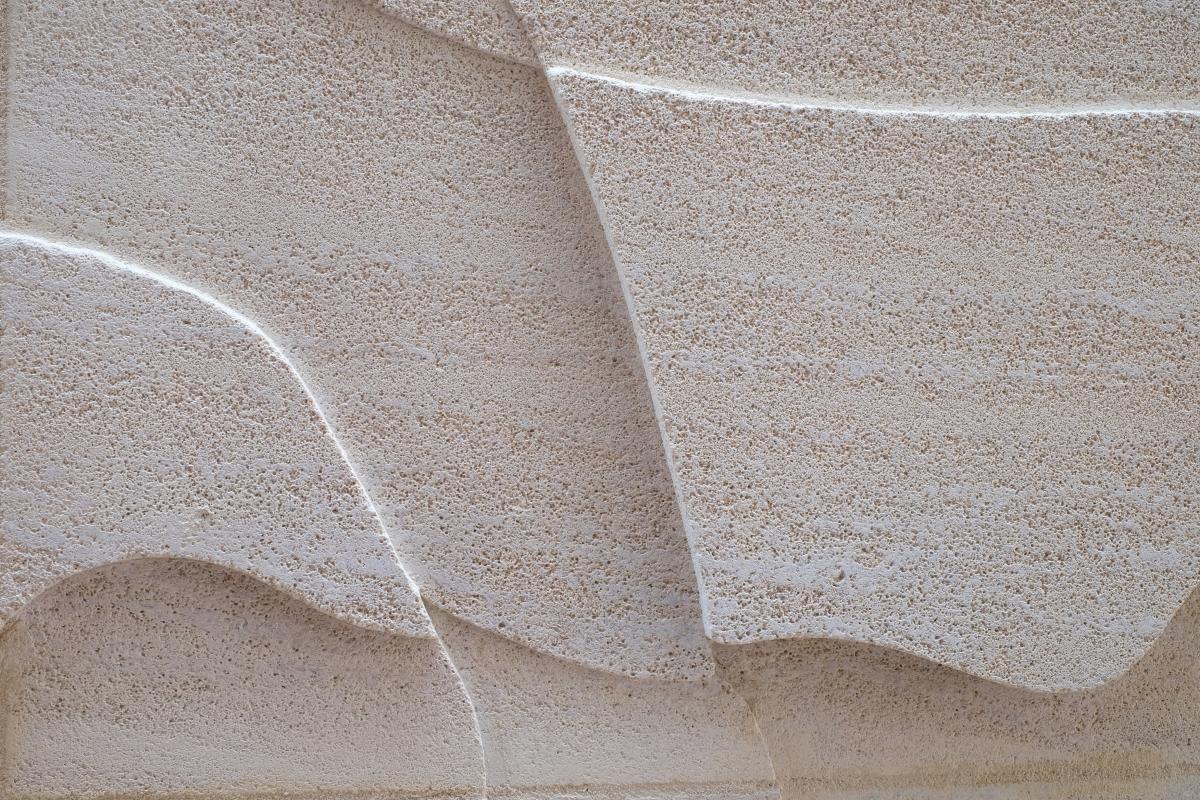 The stone is laid to an exact 3mm joint in order that that the levels of relief follow through the work. Each level has been cut in steps from 60mm to just 1mm and the joints are pointed to match the levels.

One of the biggest technical challenges was keeping the edges undamaged through production and delivery as Clipsham is an open stone and can chip. It was for this reason that 130 packing cases were made to measure to transport the stone to the site for installation.

Stone Drawing is the third installation that stoneCIRCLE has made for Susanna Heron. Previous projects included Henslow’s Walk (2009–2011), a stone relief for the Sainsbury Laboratory of Plant Sciences at Cambridge University, another Szerelmey project that was awarded the RIBA Stirling Prize in 2012 (read more about that here).