Sustainability: If this is not the time for natural stone, when will be?

This could be the right time for the sustainable, low carbon benefits of building and decorating with natural stone to be recognised and appreciated.

Those waiting in Piazza Bra for a bus to take them to the Marmo+Mac stone show in Verona on the Friday of the exhibition were moved to a different location because Piazza Bra was filled with pupils from the local schools. The youngsters had been motivated to protest by 16-year-old Swede Greta Thunberg, who has instigated an international youth movement calling on governments to take action to reduce the amount of greenhouse gasses being added to the atmosphere. 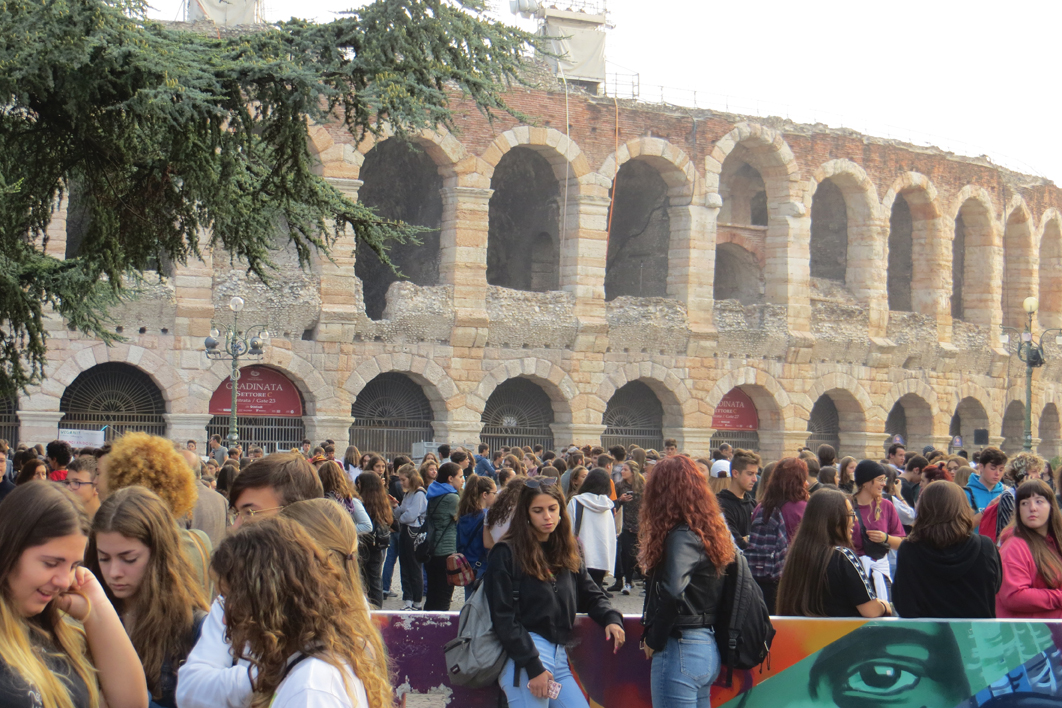 The protest was taking place against the backdrop of the famous Arena in Verona, these days best known for the operas held there, although for much of its 2,000-year history it has been put to more grisly uses, including the burning alive of 200 ‘heretics’ in 1278.

The Arena was built in the year 30AD of a local limestone and stands today as a testament to the longevity of stone as a building material and to the skill of the Romans to use it in construction. It survives in spite of a flood, several earthquakes and the plundering of the stone for use in other constructions.

The climate protests were not just in Italy, of course. They have taken place all over the world. And they have not just involved school children and teenagers. The pictures above show scenes of the Extinction Rebellion in London as well as the protest in Piazza Bra. In London the age range was much wider.

It is not just protestors who are concerned about the environment, though. It is increasingly occupying the minds of architects – just witness this year’s shortlist and winner of the RIBA Stirling Prize.

The shortlist included a carbon-neutral house in Berkshire with walls made of blocks of cork slotted together rather than using mortar or glue. The winner was a development of 105 particularly energy-efficient homes for social rent, designed to Passivhaus standards for Norwich City Council.

As well as architects being keen to achieve BREEAM (and other) accreditation for the energy efficiency of their designs, a group of them has now formed the Architects’ Climate Action Network (ACAN), which had its first meeting at the Building Centre on 22 October. Its aim, it says, is to achieve systemic change.

ACAN was formed in the light of the global climate protests and public concern about the environment, such as plastic in the oceans and the displacement by humans of other species we share the planet with.

It acknowledges that the built environment is a major contributing factor to greenhouse gas emissions – buildings account for about a third of greenhouse gas emissions in the UK, houses alone contributing 14% (vehicles contribute 27% and energy generation, at one time by far the biggest polluter, now accounts for 23%, thanks to renewables continuing to generate an increasing proportion of energy used).

Carefully designed and built property can be carbon neutral but because of overriding concerns about the build price rather than lifetime costs it often is not. Wider environmental costs are seldom factored in specifically, although some economists are attempting to do so.

ACAN says architects in general are not acting with anything like the urgency required to address this problem.

RIBA’s climate declaration in June was at least a step in what ACAN considers the right direction.

RIBA President Ben Derbyshire said then: “The climate emergency is the biggest challenge facing our planet and our profession. But to have a significant impact we need to do more than make symbolic statements – we need to turn warm words into impactful actions.

“The implementation of the five-year action plan we have committed to today will ensure we are able to benchmark change and evaluate the actions that make most impact.”

The Ethics & Sustainable Development Action Plan RIBA committed to includes measurable actions to support a net zero carbon built environment. It is intended to drive change at a national and international level in industry standards and practice, in government and inter-governmental policy and regulation and, in its own small way, in RIBA’s carbon footprint.

What will happen after Brexit, who knows. But it has been the UK that has tended to lead Europe on global warming issues rather the other way round and on 15 October, the Day after the new session of Parliament commenced with The Queen’s Speech, the Government introduced its latest Environment Bill, which once again proposes to enshrine in law the country’s commitments to environmental protection.

The Government says the Bill will ensure the environment is at the heart of all its policy making. It will ensure that this government – and future governments – are held to account if they fail to uphold their environmental duties, including meeting net-zero carbon emissions by 2050 and wider long-term targets on protecting biodiversity, air quality, water, and resource and waste efficiency established under the Bill.

In July, when the Environment Bill was still being drafted, Michael Gove said (admittedly just before he lost his job as Environment Secretary): “We know we must do all we can to protect our precious natural environment. There is a clear need to act to ensure we do not leave this planet to the next generation more polluted, more dangerous and denuded of its natural riches.

“The measures in our Environment Bill will position the UK as a world leader, ensuring that after EU Exit environmental ambition and accountability are placed more clearly than ever before at the heart of government.”

The Green Party has expressed concerns that the UK’s new Office for Environmental Protection will not have any powers to fine any government for failing to meet its targets, which the European Union has had while the UK has been part of the Union.

If Britain moves closer to America post Brexit, attitudes towards the environment might change. Clearly the current administration in the USA does not share a commitment to reducing carbon emissions, although, individually, the states themselves often do.

The government then was planning to require zero-carbon housing. The credit crunch and its associated economic downturn changed the focus of attention, especially as the housebuilders pleaded with the government not to impose zero carbon builds on them.

Perhaps reports such as that from the UN World Meteorological Organisation that 14 of the 15 hottest years on record have occurred since 2000 will help keep environmental issues to the fore.

Even in the UK this year The Met Office recorded a new record high temperature of 38.7ºC in Cambridge on 25 July.

Stone is ideal for staying cool in hot weather and because of its thermal mass also works well in chilly British winters when used in conjunction with behind-stone heating, often as under-floor heating.

Behind-stone heating has the benefit of being more efficient than radiators, so uses less energy than most central heating.

Yet while the points above are worth making by stone processors in support of their products, the main sustainability argument for stone is the low encapsulated carbon content of the stone itself.

The high CO2 cost of cement

While it might not feel like it to stone companies when they receive their utility bills, stone uses relatively small amounts of energy in its extraction and processing.

Compare it, for example, with cement used in concrete, the production of which releases carbon dioxide (CO2) into the atmosphere both directly and indirectly.

Cement is basically limestone burnt with a few other ingredients in a kiln at a temperature of 1400ºC. Limestone is calcium carbonate (CaCO3). Burning it produces CaO, releasing CO2 into the atmosphere.

Achieving temperatures of 1400ºC also requires a lot of energy, which tends to come from coal, gas or pellets produced from discarded vehicle tyres. Producing a tonne of cement requires 4.9million kiloJoules of energy. That is the equivalent of about 180kg of coal and generates nearly a ton of atmospheric CO2. The cement industry adds around 2.8billion tonnes of CO2 to the atmosphere each year – 8% of the human contribution to greenhouse gasses.

Just about any process that requires heat is basically going to contribute to greenhouse gas emissions all the time we are burning fossil fuels and other carbon products for energy.

Engineered quartz also requires ‘cooking’, although not at as high a temperature as cement. It uses resins to stick the quartz together and the resins used are often petrochemical products – basically plastics. Apart from polluting with some fairly noxious substances in the conversion of mineral oils into plastics, emissions from the plastics industry is about 2billion tonnes of CO2 each year.

Ultradense sintered products, the best known of which is Cosentino’s Dekton, also require a lot of energy for presses and kilns.

In 2017, just before Cosentino opened its third Dekton line, the Spanish manufacturer told NSS that the mixtures of 20 or so different minerals used to make Dekton are sintered together in presses that exert a force of 25,000tonnes. The material is heated in 200m long ovens at temperatures of up to 1,200ºC. The gas for heating the kilns on the two Dekton lines Cosentino was then operating and its Silestone quartz lines was costing the company €20,000 a day.

Of growing environmental significance is the amount of water used in processing stone, although most stone companies (in the UK, at least) have some kind of water recycling system – and new, more efficient systems are being installed all the time, often in association with the installation of new machinery. 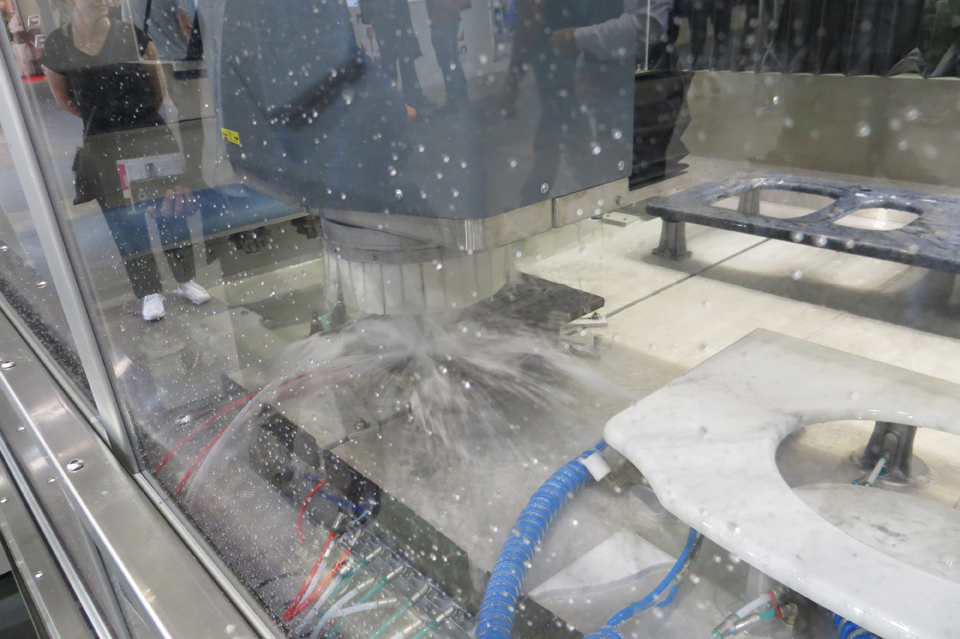 The stone uses listed in the BRE Green Guide generally get a high score for environmental sustainability in spite of losing some points because of the amount of water used by the processing machinery.

The new generation of sintered stones and porcelains, on the other hand, tend to increase the amount of water used by the processing industry because even more of it is needed to protect the materials, the tools and the machines.

The difference between ISO 50001 and ISO 14001 is that 50001 focuses on energy usage whereas ISO 14001 looks at environmental protection in general.

Companies that have achieved the standards say the cost reductions that have resulted from the detailed analysis of their businesses imposed by working towards the standard have far outweighed the cost of achieving the standard. And the savings tend to continue to improve over time because of the standards’ requirements for on-going monitoring.

Companies admit that without commiting to working towards a standard the energy savings would probably never have been made because the analysis that identified the potential for making them would never have been carried out.

Even relatively small tweeks to working practices to avoid waste and rehandling can produce significant energy savings. Low energy light bulbs, insulation, barriers between interiors and exteriors... there are plenty of ways to reduce your energy overheads and a lot of advice online, including Better Business Guide to Energy Saving, which can be downloaded free from the Carbon Trust website at bit.ly/CT-energy. 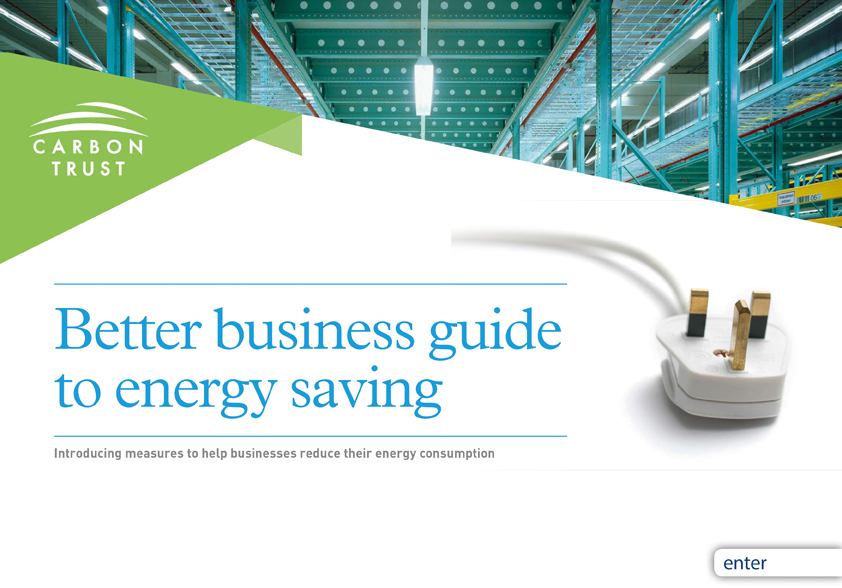