The tile sector gathered in St John’s Hotel, Solihull, on 14 May at The Tile Association’s Tile Awards to celebrate the best of its  products and workmanship. There was, as ever, plenty of stone among the winners.

There are no losers at the Tile Awards because the whole industry benefits from the public showing of some of the best work the industry has to offer. And as the judges say, it is just their opinion. Other judges on another day might make different choices.

But even if there are no losers, there are winners and the winner of the coveted Tile Fixer of the Year title when the Awards were presented at St John’s Hotel in Solihull last month (14 May) was Lee Featherstone of The Natural Stone Tile Gallery in Melksham, Wiltshire.

Lee started his career aged 14 as a Saturday boy when he joined PM Bines, a stonemason and marble and granite fabricator. On leaving school he joined the firm full time while studying through CITB to complete a stonemasonry course at Bath College, where he gained an NVQ Level 3 qualification. In 2005 he set up The Natural Stone Tile Gallery, providing stunning stone tiling for floors and walls, often providing matching skirtings, vanity tops and shower trays to create a seamless finish in any room. His background means he can fabricate his own materials to offer precision and a bespoke finish.

His success demonstrates how natural stone continues to have the ‘Wow’ factor that ceramics and porcelain sometimes struggle to emulate – although the manufacturers of man-made products are certainly doing their best to emulate it, as well as the look of other products, especially at the moment, wood.

There was a lot of stone in the projects shown by several of the other finalists for the Fixer of the Year title as well as in the Award categories for sectors of the market, with natural stone featuring strongly in the ‘Commercial Contract’ and ‘Domestic’ category winners in particular.

On the other hand, two of the most spectacular uses of stone – by Wes Geraghty at Taymouth Castle (included in last month’s Natural Stone Specialist report on ‘Interiors’) and by Trainor Stone & Tile at the Harvey Nichols store in Birmingham were beaten in their categories.

But to talk of projects as being ‘stone’ or ‘not stone’ is a bit misleading. It was particularly noticeable this year that the designers of many projects had freely mixed natural and man-made products to achieve the results they were after.

For instance, the Trainor Stone & Tile work at the Harvey Nicholls store pipped at the post in the ‘Commercial Contract’ category by Armatile’s stunning work at St Patrick’s Church in Donaghmore, Northern Ireland (see photos below), used plenty of marble but most of it was sandwiched between concrete to create a path for customers to follow through the open plan, single storey store in the new look Mailbox complex in Birmingham.

The store was designed by architect Virgile + Partners and is a concept that will be the blueprint for future Harvey Nichols outlets – Trainor has already been awarded a two-year installation contract at Harvey Nichols’ new Knightsbridge store in London.

In Birmingham, Trainor Stone & Tile was commissioned by fit-out firm Portview to install 3,400m2 of tiling within the 4,500m2 store. In round figures, the tiling was valued at £500,000.

Virgile took an eclectic approach to materials throughout. There are semi-transparent polycarbonate ceiling panels; the central space has counters made from concrete slabs topped with white Corian and faced with iridescent horizontal panels; the background walls variously have rough unfinished plaster and an elaborate texture of brick and timber blocks forming a sculptural pattern.

The main field of the floors consists of  concrete trapezium tiles measuring 1500mm on their longest side. There are black diamond and triangular shaped concrete tiles that match the size of the larger grey trapezium to give the client continuous grout lines. And 1,000m2 of Calacatta Vagili marble blends with the concrete tiles to conform precisely with the design specification.

Representatives from the professional and contracting teams visited the Italian quarry that the Calacatta Vagili came from to choose the specific material they wanted in the project.

The installation of it, creating the same effect as its concrete counterpart, presented Trainor with a significant challenge, not least because the concrete tiles have 6mm joints and the marble tiles 3mm joints. The tighter joints meant the sawing of the stone had to be particularly accurate and that Trainor’s team had to be millimetre perfect over what was an extensive area.

The ‘Domestic’ category winner was Stone & Ceramic for 4 Cowley Street, a Grade II listed property in the heart of Westminster, London. Built in the early 1900s, it was originally the headquarters for North Eastern Railways before becoming the headquarters of the SDP in 1981 and later, when the Liberals and Social Democrats merged, the Liberal Democrats until 2011.

The £5million project to turn the offices into a luxurious domestic property included Stone & Ceramic, working with Restore London as the main contractor, tiling bathrooms and en-suites with marble bath tops, vanities and mirror surrounds, lobby floors, a kitchen floor, outside terraces and a basement swimming pool in a contract worth approximately £600,000.

On the third and top level of the property, the bathrooms variously use bookmatched Carrara, Silver Portoro, Bianco Fantastico and Calacatta Oro marbles.

Each bathroom has its own design with the marble bath tops, vanity units and mirror surrounds contributing to the look of exquisite luxury.

Coming down, lobbies adjoining the staircase are paved with 20mm polished and bookmatched Calacatta Oro.

On the ground floor, the spacious kitchen is again paved in Calacatta Oro, and if you leave it through the French doors you arrive on a terrace paved with Moleanos limestone, with curved steps made from the stone.

The swimming pool is in the basement with the pool surround walls and floors clad in Moleanos. The stone has a ribbed finish to the walls and a sandblasted slip-resistant finish to the floors.

In the pool and circular spa, Stone & Ceramic installed the waterproofing as well as the Bisazza Elena mosaic finish. The same Bisazza mosaic clads a steam room and a shower room adjoining the pool area. 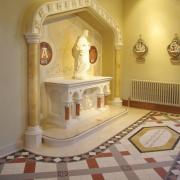 The picture on the left shows the Victorian St Patrick’s Church in Donaghmore, County Tyrone, following a 20-month refurbishment that included beautifully intricate tiling work created and fitted by the Northern Ireland tile and marble specialist and manufacturer, Armatile.

The steps and altar floor are created from polished Crema Marfil with a strip of black stone inset. Armatile designed and made (using their two waterjet cutters among other machinery) nine floor features with white Carrara marble slabs surrounded by a border depicting vines and leaves in Sienna, Rojo Alicante and Alpi Verdi marbles. 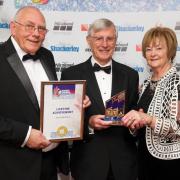 This impressive project won the ‘Commercial Contract’ category in the Tile Awards, in which Armatile founder James McCann was honoured with a Lifetime Achievement Award. He is in the centre of the picture (right) with his wife, Pat, receiving the Award from Ian Kershaw at the presentation ceremony in Solihull last month (14 May).